The two made contact in turns 1-2 on entry and again on exit. Tony Stewart then turned left down the straight away, intentionally wrecking Ryan Newman as well as himself. Upon turning left onto Newman’s fender it hooked Stewart and pointed Stewart, Newman and Carl Edwards all to the inside wall. All 3 bounced off the inside wall and multiple cars were collected.

I guess he thought has was in a sprint car again. He didn’t know how to control his anger.

This is the second week in a row Tony Stewart has intentionally wrecked a fellow NASCAR Competitor down the straight away. Last week at Darlington Raceway, Stewart wrecked Brian Scott in a very similar situation.

Ryan Newman used to drive for Stewart-Haas Racing. However, last night Newman had no kind words for his former boss after climbing from his wrecked #31 Catepillar machine. 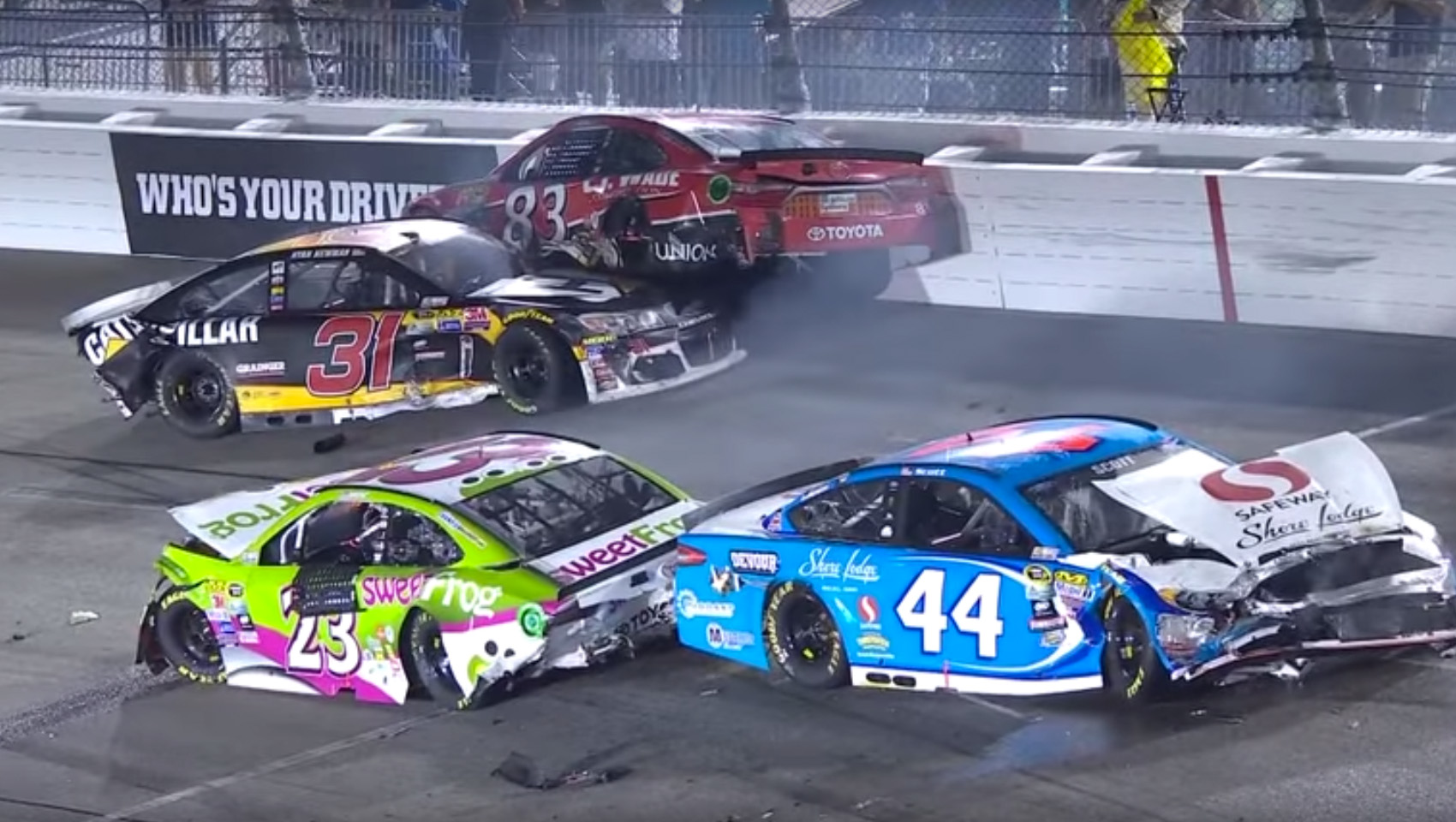 Newman was asked what happened after exiting the infield care center. “I think it’s pretty obvious watching the video. I don’t even have to watch it. The #14 just cut across my nose into turn one.”

“I got into him a after that. But he already chopped into me and messed up my line.” He continued, “I clipped him a little bit coming off of two. Then, he just turned into me going down the back straight away there.”

He then had harsh words for his former boss, “I guess he thought he was in a sprint car again. He didn’t know how to control his anger.” But Newman didn’t stop there, “It’s just disappointing that you got somebody old like that, that retired and should be retired the way he drives. It’s just ridiculous”

Newman was asked if the intentional wrecking was justified. He candidly replied, “I only hit him in turn 1. So I don’t think there was any reason other than him being bi-polar and having anger issues.” With a big smile he continued, “Google Tony Stewart, you’ll see all kinds of things he’s done. Look it up on youtube, everything else. [He’s} quite the guy.”

Tony Stewart didn’t give his interview until after the race was over. But he did take the time to share his thoughts on the incident. Post race Tony Stewart was asked, “He [Ryan Newman] seamed to indicate you cut across his nose and that was intentional. What was your reaction to what he said?”

Tony Stewart responded to the question, “He’s right.” He continued, “I mean that’s the third time he’d driven into me during the night. You know, how many times does a guy get a free pass until you’ve had enough of it.”

“I go into 1 and he dive bombs in there. I’m already coming down. It’s not like I was trying to squeeze him into the infield or something.” Speaking on their friendship. “Ryan and I are good friends, I wouldn’t do that to him.”

3 times, that’s two more times than I usually let somebody run into me.

Stewart was also relayed the comments Ryan Newman made about Tony Stewart’s retirement. He responded, “He’ll get his wish in about 10 weeks.” As this is the final NASCAR season for Tony Stewart as a full time driver in the sport.

Ryan Newman was battling for the final spot in the chase grid going into Richmond. Tony Stewart mentioned he had 24 weeks before tonight to make things happen. Tonight didn’t dictate his result.