NASCAR Hall of Fame Building Looted after a night of riots in Charlotte, NC

The NASCAR Hall of Fame looted and vandalized overnight in Charlotte, NC. Windows shattered, signs hanging through glass on the $195 million dollar museum. A state of emergency declared on the city, the home of NASCAR.

UPDATE: NASCAR Hall of Fame has issued a statement. Read below.

The NASCAR Hall of Fame display section was left undisturbed, on the interior, as no rioters entered that area. Rioters did throw street signs through the NASCAR Media Center windows as shown below. Actually, multiple windows were smashed, throughout the exterior of the building.

However, the Buffalo Wild Wings did not fair the same result. The BWW restaurant is attached to the NASCAR Hall of Fame building. It was looted, smashed and entered by rioters.

Keith Lamont Scott, father of 7, was killed Tuesday, at the hands of police. Another black man killed by police had the Black Lives Matter community taking to the streets demanding justice or perhaps just proof of justified action.

Police claim Scott was holding a weapon, a gun. However, the family claims it was a book, not a gun. There is a video of the altercation and the Black Lives Matter community is demanding to see it. The police cheif has stated that the family will be allowed to see the video. However, he does not plan to release that video to the general public, as it shows a man in his darkest of days.

Tear gas forced protestors and rioters to scatter across the city. Looters were filmed on live television as they busted windows and entered stores. Leaving with TV’s, electronics and anything they could carry.

It was the second night of protests in downtown Charlotte, North Carolina. Tonight started peaceful. However, after the first few rounds of tear gas were dispersed, the peaceful ones evacuated, leaving nothing but rioters.

NASCAR plaza is in lockdown. We’re being asked to remain in the building until further notice

Several Charlotte businesses including the NASCAR Hall of Fame were looted and vandalized in the release of outrage. The Hyatt Hotel and likely a hundred or so more businesses were inflicted with some sort of damage.

The NASCAR Hall of Fame opened in 2010 at a cost of $195 million. The building was erected due to $137 million in bank loans from the city of Charlotte. Construction for the NASCAR museum started on the 400 E. Martin Luther King, Jr. Blvd site in 2007. 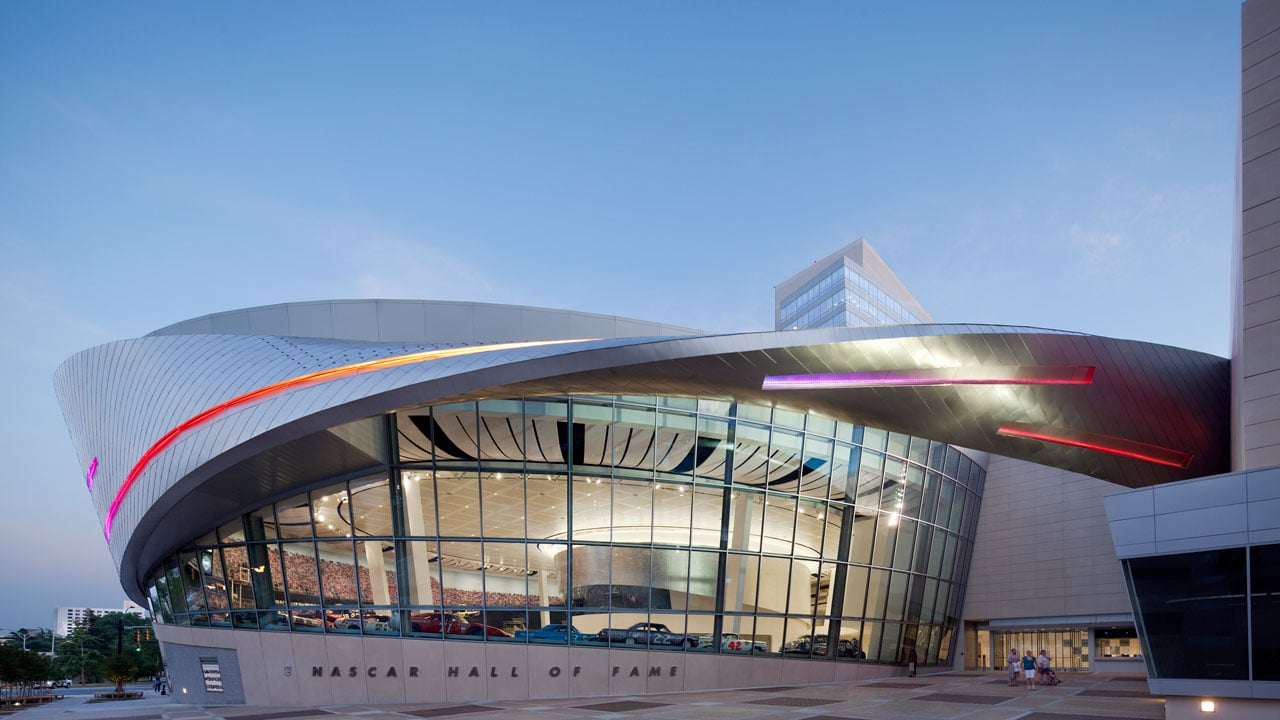 The last 48 hours have been a difficult time for the Charlotte community. While the NASCAR Hall of Fame did experience damage to an exterior window during last night’s events, the exhibits and artifacts housed in the venue remain intact. There was a breach that took place at one of our tenant spaces, Buffalo Wild Wings.

We are operating under normal business hours today and will continue to work with the City and CMPD to monitor the latest developments.