Quaid, a Houston native, returns to his home state to deliver the command for the 40-car field to start their engines for one of the largest-attended, single-day sporting events in Texas. He will be giving the command for the eighth race in the 10-event, elimination-style Chase for the NASCAR Sprint Cup championship playoff format live on NBC for the 1 p.m. CT race start. 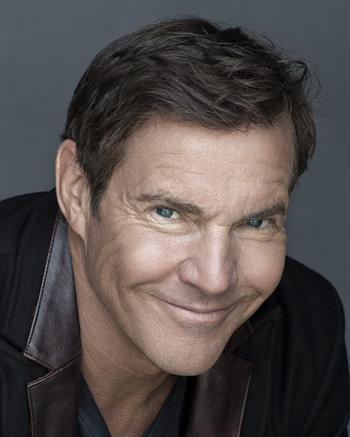 “As a Texan, I’m thrilled to be the Grand Marshal at the AAA Texas 500,” Quaid said. “It is a great honor to say the greatest words in motorsports and I’m looking forward to it.”

Quaid, renowned for his distinct portrayals in both comedic and dramatic roles over the past 40 years, currently is starring and serving as an executive producer in season two of Crackle’s one-hour scripted auction drama, “The Art of More,” premiering on Sony’s free streaming service with all 10 episodes on Wednesday, Nov. 16.  Quaid stars as charismatic real-estate shark Samuel Brukner, a Machiavellian master of money and power who is one-part charm and one-part intimidation.

The opening season of “The Art of More,” which premiered in November 2015, garnered rave reviews and generated more than two million views within the first month with more than half of those viewers being new to Crackle. The second season delves deeper into the high-stakes arena of New York’s cutthroat fine art and memorabilia world and continues to explore the blurred lines between ambition and greed, revenge and crime.

Quaid was most recently seen in the fact-based drama “Truth” and has completed filming the second season of the BAFTA award-nominated television series, “Fortitude.” He will next be seen in Universal’s “A Dog’s Purpose” that is scheduled for a January 2017 release and also begins production on the sci-fi thriller motion picture “Kin” with James Franco in November.

Quaid’s career began to gain attention in the late 1970s for roles in such films as “Breaking Away” before earning public and critical acclaim for his role in the 1983 release, “The Right Stuff.” Other notable credits include “The Rookie,” “The Day After Tomorrow,” “Traffic,” “Vantage Point,” “Frequency,” “The Parent Trap” and “Soul Surfer.”

The AAA Texas 500 is part of a NASCAR tripleheader weekend at Texas Motor Speedway that also includes the Camping World Truck Series Long Horn 350 on Friday, Nov. 4, and the XFINITY Series O’Reilly Auto Parts Challenge on Saturday, Nov. 5. For tickets or additional information, please visit www.texasmotorspeedway.com or call the speedway ticket office at 817.215.8500.