FORT WORTH, Texas (October 25, 2016) – Texas Motor Speedway has become an international destination over the past five years with NASCAR and Verizon IndyCar Series race fans visiting the world-renowned motorsports venue from 41 countries and territories.

UPDATE: We have found our Antarctican! Thanks to everyone who helped spread the word. Story to follow soon! 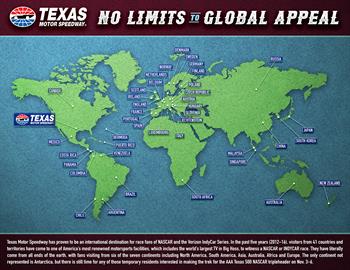 They have arrived from literally all ends of the earth, with six of the world’s seven continents represented including North America, South America, Asia, Australia, Africa and Europe. Not surprising, the lone one missing is Antarctica, the southernmost continent and site of the South Pole that is a virtually uninhabited, ice-covered landmass.

But that isn’t going to deter Texas Motor Speedway for striving for perfection by having a fan representing every continent attend a race in this five-year span during its 20th anniversary season of racing.

It may appear to be an implausible idea to identify a race fan from Antarctica, but let’s not forget that the National Science Foundation’s United States Antarctic Program (USAP) is stationed there and those employees return to their U.S. homes after their tenures. There also have been military deployments over the years.

There also are two places in Antarctica that are sometimes regarded as civilian “towns.” The first is the Chilean Villa Las Estrellas base (just over 100 residents in the summer, around 80 in the winter) on King George Island, part of the South Shetlands group this is off the western tip of the Antarctic Peninsula. The second is the Argentinian Esperanza base (55 winter residents) in Hope Bay at the very tip of the peninsula. They both have medical facilities and a school, among other facilities, but are more accurately regarded as associations to the military and scientific operations. In recent years, the Chilean Villa Las Estrellas has become the site of tourist activity for “fly/sail” trips to Antarctica. There are snowmobile and ski trips available from the “town” as well as wildlife sightseeing and these tourist visits are served by a small 20-place hostel.

Texas Motor Speedway is searching for any individual that can prove they were a temporary resident of Antarctica and their reward will be a free VIP package to the AAA Texas 500 NASCAR tripleheader weekend Nov. 4-6. The speedway will provide that individual along with a guest a pair of suite tickets for the race weekend, pre-race passes to the concert by country artist Jake Owen, access to the Sprint Cup drivers’ meeting and garage passes along with a Texas Motor Speedway “No Limits” merchandise package.

“Given our ‘No Limits’ theme, it is only appropriate that we would celebrate an individual that has lived in the driest, coldest, windiest and emptiest place on Earth in the name of scientific research,” Texas Motor Speedway President Eddie Gossage said. “I’m very optimistic that we may very well have someone in our own backyard that has spent time in Antarctica and we look forward to providing them and a guest with the ultimate NASCAR experience.”

For those individuals that can prove they were temporary Antarctica residents and are interested in the free AAA Texas 500 VIP package, please contact Texas Motor Speedway through pr@texasmotorspeedway.com or through our social platforms on Twitter at @txmotorspeedway or the speedway’s official Facebook page.

Mark Martin: Fans that ‘bash’ NASCAR are looking for something other than auto racing

Denny Hamlin is looking to become a NASCAR team owner, per rumors

Following a meeting: NASCAR is looking to run the high downforce package again in 2018