HOMESTEAD, Fla. – Ryan Hunter-Reay wouldn’t trade his job as a Verizon IndyCar Series driver for anything. But the 35-year-old Floridian experienced something that may have matched his vocation for thrills when he flew with the U.S. Air Force Thunderbirds.

The Andretti Autosport driver hopped into the cockpit of a two-seat F-16 Fighter Falcon at Homestead Air Reserve Base on Friday and went for the ride of his life. The pilot, Maj. Scott Petz, took Hunter-Reay for an exhilarating journey over South Florida and the Florida Keys that included many of the daredevil rolls, loops and other maneuvers that the Thunderbirds typically perform in group formation feet apart. Hunter-Reay also experienced breaking the sound barrier and the sensation of feeling 9.7 sustained G-forces through a turn – nearly double what he feels in an Indy car.

“This was by far the best,” said Hunter-Reay, still grinning ear to ear after climbing out of the F-16. “Racing, you get used to it over years. I’m sure if I just jumped in an Indy car and went into Turn 1 at Indy at 230 mph, that would probably be right there as well – and it is. But this was just amazing!

“Since I was a kid, I wanted to be a fighter jet pilot or race cars and my dream came true to race cars. This today was like a whole new world had opened up for me. To experience what these guys do and what these men and women do on a daily basis to prepare these planes, and then to get your rear end in a seat and pull those G’s and do the cloud surfing as they were doing, this is something I will absolutely never forget and it was one of the best experiences I’ve ever been through.”

Hunter-Reay flew with an Australian stunt team in 2004, in conjunction with the Indy car race at Surfers Paradise. While that ride included a number of maneuvers, it wasn’t at the speeds or with the high G-forces he experienced with the Thunderbirds, whose performances at air shows around the nation display the precision choreography, skills and capabilities that USAF pilots and jets possess. The F-16 is the Air Force’s premier multi-role fighter jet and Hunter-Reay learned it first-hand.

“I just have a lot of appreciation for the craft and what these guys do, especially the Thunderbirds,” Hunter-Reay said. “What they do feet apart from each other and the coordination and the preparation that goes into putting on those air shows, I think people on the ground take it for granted and how close they fly. At those speeds, how calculated every move needs to be, a lot goes into it.”

Petz, a South Dakota native now based at Nellis Air Force Base, the home of the Thunderbirds outside Las Vegas, said Hunter-Reay was the model passenger. Petz said it was “nice to fly a guy from INDYCAR that knows about aerodynamics and lift” because their jobs have parallels making precise, split-second maneuvers while experiencing high forces on their bodies in their respective cockpits.

“The bigger thing,” the major added, “is that he was able to see how much goes on behind the scenes, which is something that a lot of people that watch INDYCAR can relate to. They see the pit crews, they see the people throwing tires, they see the fuel changers and that’s the same thing that we have on the road.”

Hunter-Reay saw the similarities as well, which made him feel more comfortable handing over the “driving” chores to Petz.

I did feel somewhat at home in the cockpit 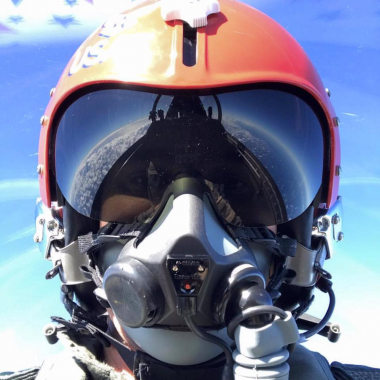 “I did feel somewhat at home in the cockpit,” the 2012 Verizon IndyCar Series and 2014 Indianapolis 500 champion said. “It’s a tight space, you’re feeling the G-forces, you’re going fast. Like us, these guys are picking up reference points and they’re almost apexing turns. It’s all about geometry. They think about where their corners are going, how they’re going to apex certain areas, where they need to climb to to get the right speed and pull out in the right angles.”

Hunter-Reay was able to secure the experience through family friend Rob Ceravolo, a former fighter jet pilot who now operates a charter flight company in Hunter-Reay’s hometown of Fort Lauderdale. Ceravolo knew of Hunter-Reay’s desire to fly so he coordinated the experience after learning that the Thunderbirds were performing at the Homestead air show this weekend.

Hunter-Reay admitted he didn’t want it to end.

“Every minute of it was cool,” he said, just before personally thanking each member of the Thunderbirds crew for their service to country. “Right when you take off, coming off the deck from a few hundred feet and then doing the full vertical pull to three miles straight up. That first pull was almost 6 G’s and I thought it was pretty heavy, but once I got used to it, I just wanted more and more and more. We were doing huge rolls and a lot of the maneuvers that they do in the shows. I am so thankful to have this experience. On the way back I was bummed just thinking that I may never get to do this again, just trying to soak up every moment.”

“This has been an amazing opportunity; one I’ll certainly never forget. I checked a lot of boxes off the bucket list today, that’s for sure.”