DAYTONA BEACH, Fla. – Coming off an historic inaugural season with a new entitlement partner, the NASCAR Pinty’s Series is primed to capitalize on that momentum with a 2017 schedule that includes traditional marque events and several unique changes.

The NASCAR Pinty’s Series will open on Sunday, May 21 with the popular Victoria Day weekend at Canadian Tire Motorsport Park in Bowmanville, Ont. The series will make a second stop at the road course on Sunday, Sept. 3 in conjunction with the NASCAR Camping World Truck Series. And the Toronto Honda Indy weekend will again feature Canada’s national stock car championship series in the event held by Toronto’s Lake Ontario waterfront on the Exhibition Place street course. The series will be the headliner on Saturday, July 15. 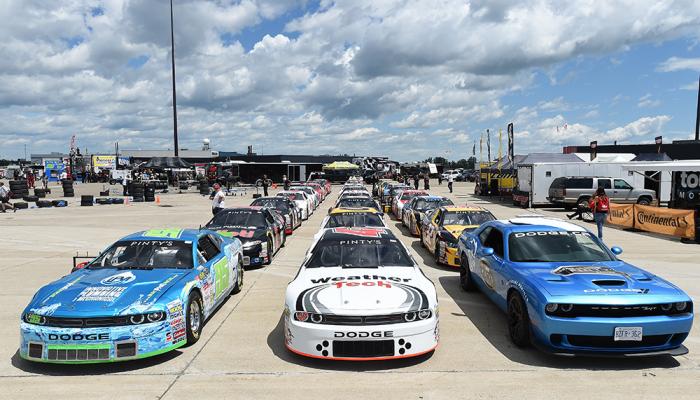 “From Cayden Lapcevich’s memorable championship campaign, to the thrilling battles between Quebec’s favorites Andrew Ranger, Alex Tagliani, Kevin Lacroix and Alex Labbe, the 2016 NASCAR Pinty’s Series was one for the record books,” said George Silbermann, NASCAR vice president of weekly & touring series. “With the newly released schedule, the 2017 season is shaping to take that excitement to the next level. The mix of world-class road courses and challenging ovals will provide a great test for drivers and teams, and excite fans across Canada.”

“The first season as an entitlement sponsor with NASCAR exceeded our wildest expectations,” said Tony Spiteri, Pinty’s senior vice president, marketing, research & development. “Pinty’s Foods is proud to be part of the top racing series in Canada, and to have our brand represented at some of the best racing tracks in the country.”

The annual West Coast swing will feature a new look: The NASCAR Pinty’s Series will visit Wyant Group Raceway in Saskatoon, Saskatchewan, for twin features on Wednesday, July 25, and then travel to Alberta’s Edmonton International Raceway on Saturday, July 29. The three championship events will mark the halfway point of the 2017 season.

The series’ seventh trip to Circuit ICAR, on the grounds of Montreal’s Mirabel International Airport, will also feature a new look. The road-course event will be run under the lights on Saturday, July 8. The 13-race schedule includes a return to Ontario’s Delaware Speedway, as well.

• The season will conclude on Saturday, Sept. 16 at Kawartha Speedway in Fraserville, Ontario. The .375-mile oval has hosted the final race of the NASCAR Pinty’s Series in each of the previous 10 seasons.
• One of the most anticipated races each year is the Circuit de Trois-Rivieres, and the series will take to the Quebec street course on Sunday, Aug. 13.
• The penultimate race of the year will take place at Quebec’s Autodrome St-Eustace (Sept. 9), and the series will again visit the high-banked action-packed Riverside International Speedway in Nova Scotia (Aug. 19) and feature an early-season showdown at Quebec’s Autodrome Chaudiere (June 17).
• In addition to Toronto, which is in its second of a three-year agreement, NASCAR has signed three-year sanction agreements with Canadian Tire Motorsport Park, Riverside and Circuit de Trois-Rivieres.

The NASCAR Pinty’s Series television broadcast schedule on TSN and RDS will be announced at a later date.