The 2017 Lucas Oil ASCS National schedule has been released. fourty-five confirmed races, the season begins at Devil’s Bowl Speedway I on March 17th, 2017.

TULSA, Okla. (December 8, 2016) The 26th year of the Lucas Oil American Sprint Series presented by the MAVTV Motorsports Network will be another year of new facilities as the tentative lineup for the 2017 season shows 45 confirmed dates looking for at least five more to bring the season to 50 nights of racing.

Of the 45 confirmed dates, six stops will be a new facilities for the Lucas Oil ASCS presented by the MAVTV Motorsports Network. 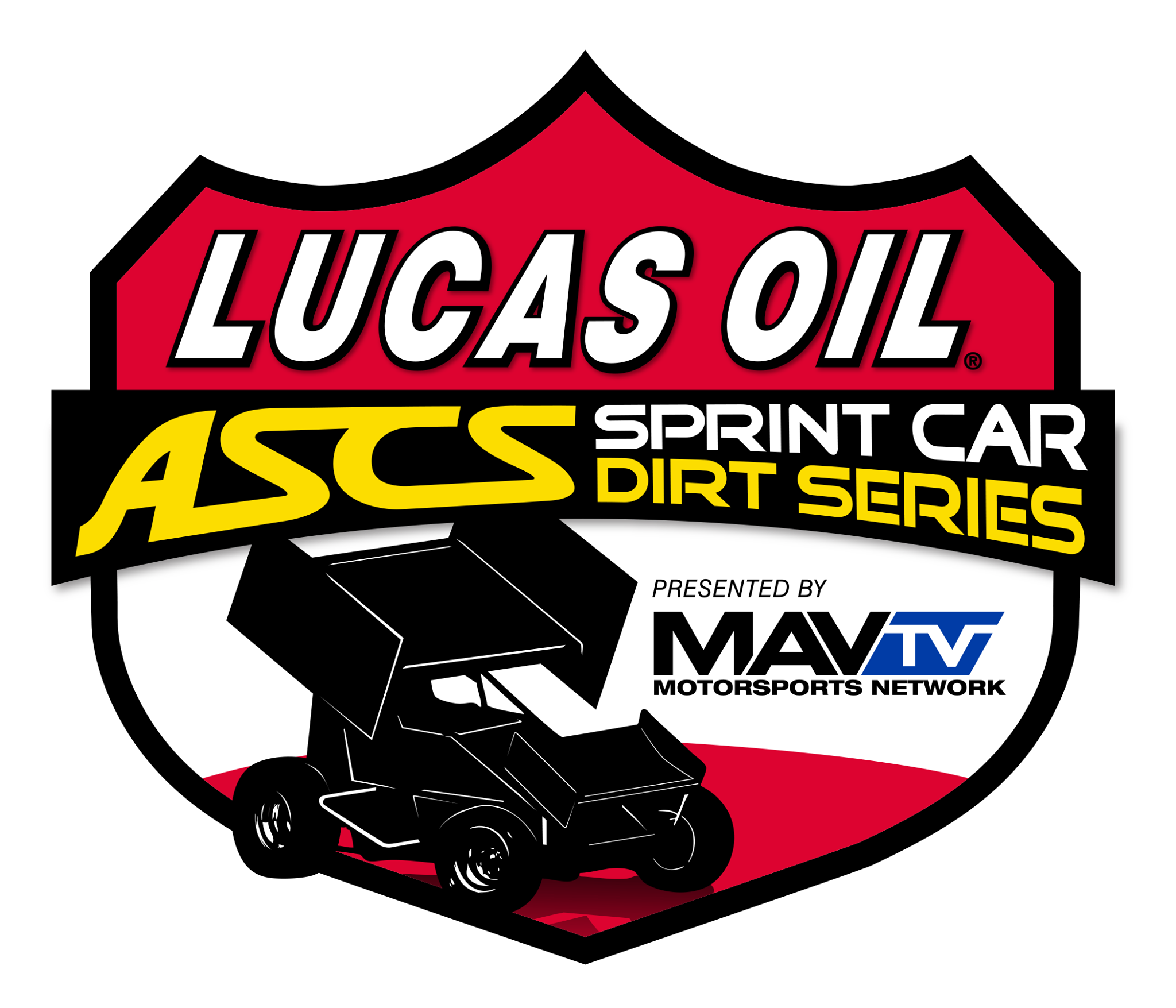 “We’ve got a few more shows that we’re just working on details on so we haven’t posted those yet, and have dates were just looking to fill at this point but the list of new tracks on the 2017 schedule shows the series is still continuing to grow,” said ASCS Schedule Coordinator, Terry Mattox.

Under the continued leadership of Matt Ward, the grandson to ASCS founder, Emmett Hahn, will embark on his seventh season as the head of the American Sprint Car Series.

Asked about the 2017 lineup, Ward commented, “I’m looking forward to it. We are fortunate to work with great promoters who continue to bring the series back and look forward to having that list of promoters grow. We’ve got some of the best talent in the sport that supports us, and we’re exited to see new teams coming on in 2017 as well.”

Ward will be joined by his wife, Ashleigh, who is the head of Timing and Scoring, as well as Bryan Hulbert who will continue to handle the P.R. and announcing duties for the series. Terry Mattox will serve as the Flagman at National Tour dates that don’t conflict with the ASCS Red River Region.

The event is tabbed to be filmed for broadcast on the MAVTV Motorsports Network and is one of several weekends on the MAVTV lineup in 2017. The list of TV dates will be released once it is finalized. 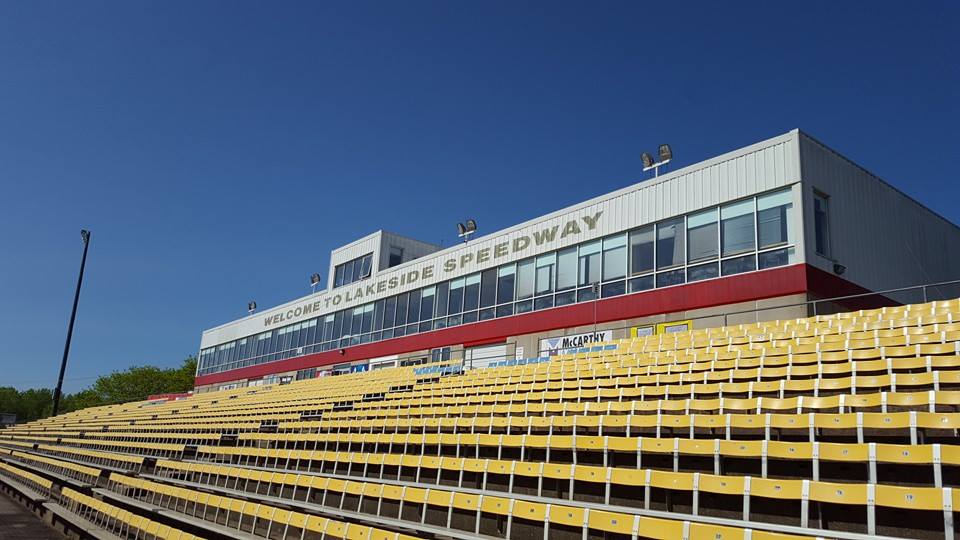 Returning to Missouri State Fair Speedway in Sedalia on April 23, the series will follow NASCAR to Kansas for a Thursday run at Lakeside Speedway on May 11.

Adding three new tracks to the ASCS history books, the series will return to Colorado for the first time since 1998 with Memorial Day Weekend going three deep at Colorado Motor Sports Park in Byers, Colo. on May 26, followed by El Paso County Raceway in Calhan on May 27 and Phillips County Raceway in May 28.

Things really pick up in the month of June as Speedweek kicks off June 10 at Route 66 Motor Speedway in Amarillo, Texas. Returning to the Devil’s Bowl on June 13, the series runs to Oklahoma on June 14 for a night at Lawton Speedway in Lawton, Okla. then Creek County Speedway in Sapulpa, Okla. on June 15. Another first time facility will see action on June 16 at the high-banked Randolph County Raceway in Moberly, Mo. The track has previously been scheduled, but no events have been run. Speedweek will wrap up at Lucas Oil Speedway on June 17. Sam Hafertepe, Jr. is the defending Speedweek Champion.

A quick trip to Washington where Alger’s Skagit Speedway presents Dirt Cup with teams again gunning for their chance at a $15,000 payday. Dirt Cup is slated for June 22, 23, and 24 with the Brownfield Classic taking the series through the first weekend of July at Grays Harbor Raceway Elma. Working back towards the Midwest, the Grizzly Nationals returns at the Gallatin Speedway in Belgrade, Mont. on July 7 and 8. Blake Hahn swept the inaugural weekend in 2016. 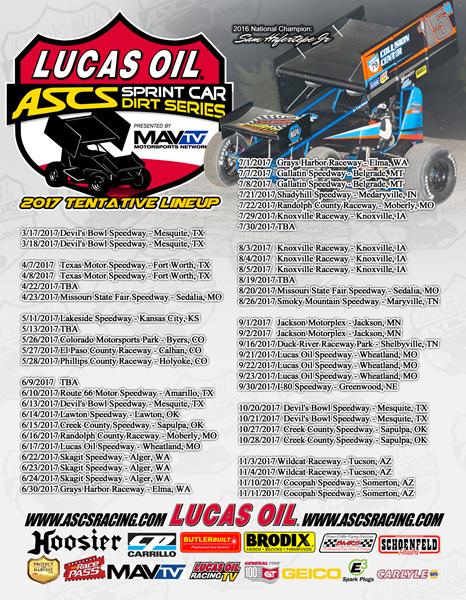 On the road to Middle America, the series will see its next new facility on July 21 at the Shadyhill Speedway in Medaryville, Ind. before turning back to Missouri for another run at Randolph County Raceway in July 22. A rare standalone event at the Knoxville Raceway in Knoxville, Iowa, the series will headline July 29 as a prelude to the Arnold Motor Supply ASCS 360 Knoxville Nationals on August 3, 4, and 5.

Off for the Knoxville 410 Nationals, the series will go for another big payday on August 20 with the High Roller Classic at Missouri State Fair Speedway. Smoky Mountain Speedway in Maryville, Tenn. is back on the National Tour lineup on August 26. The track last saw ASCS competition in 2000 when Terry Gray topped the field.

Labor Day Weekend will have the series return to the Jackson Motor Speedway in Jackson, Minn. on September 1 and 2 before the series returns to Tennessee on September 16 with Duck River Raceway Park in Shelbyville, Tenn. rounding out the list of new facilities. The Hockett/McMillin Memorial will again be three nights with a hefty five figure payday on the line in Saturday’s finale. The event will be September 21, 22, and 23. The Fall Brawl at I-80 Speedway in Greenwood, Neb. is marked to end out the month of September.

Going into the final run for the 2017 National Championship, four straight weekends of racing kicks off at the 44th Devil’s Bowl Winter Nationals on October 20 and 21 followed by the Creek County Speedway Fall Fling on October 27 and 28.

Ending things out in Arizona, the former USA Raceway is back as Wildcat Raceway in Tucson, Ariz. with action on November 3 and 4. The season will wrap up at the Cocopah Speedway in Somerton, Ariz. on November 10 and 11. Never cutting the season ending prize, teams will again be able to race for their share of a $250,000 point fund with the champion again taking home $60,000. Sam Hafertepe, Jr. is the 2016 champion of the Lucas Oil ASCS presented by the MAVTV Motorsports Network.

The 2017 rules package is being finalized and will be posted in the coming weeks. Continued updates on the 2017 season will be posted to http://www.ascsracing.com as well as the Regional Tours that make up the ASCS Nation.

*All dates subject to change without notice. For questions about scheduling, contact the ASCS office at (918) 838-3777.

Associate sponsors for the Lucas Oil American Sprint Car Series presented by the MAVTV Motorsports Network include: Hoosier Racing Tire and Brodix. All Heat Races are brought to you by ButlerBuilt Professional Seating Systems. All B-Features are presented by BMRS.

Communications for the American Sprint Car Series is provided by Racing Electronics. All events are broadcast online at http://www.racinboys.com.