TracSAFE – Will be run on 2017 USAC Racing Machines

TracSAFE is a USAC initiative aimed at driver safety. The new safety technology was introduced during the Performance Racing Industry Trade Show at the Indiana Convention Center Thursday.

The TracSAFE system will launch in early 2017 and will be implemented in the three USAC National Championship Series: Silver Crown, AMSOIL National Sprint Cars and National Midgets.

USAC will supply the TracSAFE equipment to teams at each of the series’ national events throughout the 2017 season.  USAC has led the development of this innovative new safety feature with support from Toyota Racing Development. 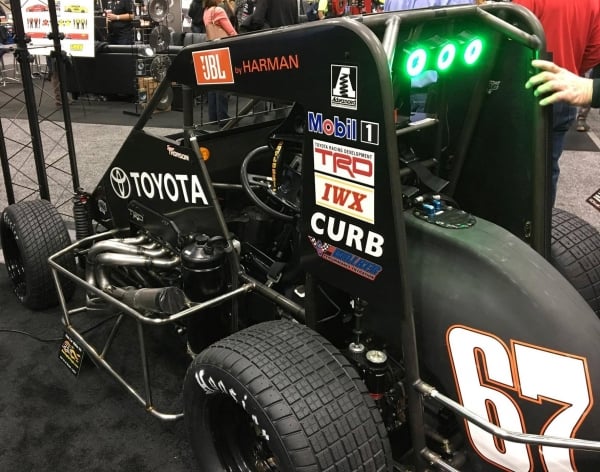 A light system on the dash and the back of the roll cage of each racecar will serve multiple functions.  The innovative feature includes an indicator on the dashboard that will light up yellow when the track goes under a yellow or red flag situation.

The TracSAFE system is connected to USAC’s timing and scoring, which will allow for an instantaneous response from race control to the competitors on the track to alert each driver in the event of an on-track incident.

As soon as timing and scoring goes under a yellow or red flag condition, the three lights on the back of the cage of all cars will immediately flash rapidly to alert drivers of a full-course yellow flag condition.

Additionally, scan code stickers will be placed on the back of each driver’s helmet to allow medical personnel quick and easy access to the driver’s detailed medical history.

With an objective of safety and decreasing the response time for communication from race control to the drivers, TracSAFE won overwhelming approval from attendees visiting the USAC display.

“TracSAFE is a first for grassroots motorsports as USAC continues to be a leader in sprint and midget racing nationally,” USAC president Kevin Miller said.  “We look forward to the full rollout in 2017 and sharing the technology with tracks and series throughout the country with our universal goal of increased safety for our competitors.”