The CARS Tour will begin it’s racing season in March. The late model tour opens up with a trip to Concord Speedway in Concord, NC. 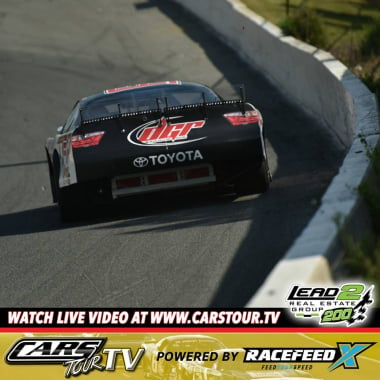 The highlight of the 2017 CARS Late Model schedule comes in May. Five of the country’s premier sanctioning bodies and one premier racetrack are teaming up to bring race fans and competitors a storybook event they have all dreamed of. The asphalt US Short Track Nationals at Bristol Motor Speedway.

The world’s best late model stock car racers will descend upon the World’s Fastest Half-Mile in 2017 when Bristol Motor Speedway, The Last Great Colosseum and one of the most famous short tracks in the world, hosts the Inaugural U.S. Nationals of Short Track Racing, May 19-21.

The signature event will be sanctioned by five different sanctioning bodies and for the first time in stock car racing history, will bring together six top categories of racing to compete on the same track in one spectacular weekend of action. Champion Racing Association powered by JEGS (CRA), who took the lead sanction body role in developing this event, will be co-sanctioning the Super Late Model race with their ARCA/CRA Super Series Powered by JEGS along with The CARS Super Late Model Tour (CARS) and the Southern Super Series (SSS).

CRA will also oversee the action for the crate late model event with their JEGS/CRA All-Stars Tour presented by Chevrolet and the Street Stocks, while the CARS officials will oversee the Late Model Stock portion of the event with the 2017 CARS Tour Schedule bringing their cars to the event.  The compacts will be organized and overseen by the Vore’s Compact Touring Series while the Modified portion of the weekend will be sanctioned by International Championship Auto Racing (ICAR) Top Speed Modified Tour.  The U. S. Nationals of Short Track Racing is being presented by Vore’s Welding & Steel.

“Bristol Motor Speedway is proud to announce today that in 2017 it will host the biggest and what promises to be the most exciting event in short track stock car racing history,” said Jerry Caldwell, executive vice president and general manager of Bristol Motor Speedway. “We’re looking forward to fans joining us following the NASCAR All-Star race at Charlotte Motor Speedway. It will surely be an event you won’t want to miss.”

“I think with today’s announcement it goes to show when you are unified and are willing to work together great things can be accomplished,” said Jack McNelly, CARS Tour Series owner. “This event took a lot of work and cooperation from all parties to make this event a reality. I don’t know a short track racer who doesn’t aspire to race at Bristol one day. It’s the most iconic short track in North America, if not the world, and come May racers from across the country are going to get that opportunity.”

The 2017 CARS Tour season finale will be run at South Boston Speedway. The season will conclude on September 30th in South Boston, VA.

Rockingham Speedway: Cars on track ahead of first race since 2013 (Video)