Jeff Gordon: “I never said I was retiring”

Today is the final day of testing in the Roar Before the Rolex 24 at Daytona International Speedway. Jeff Gordon has been on track, he will drive for Wayne Taylor Racing. Now, Jeff talks about his new SportsCar racing venture. 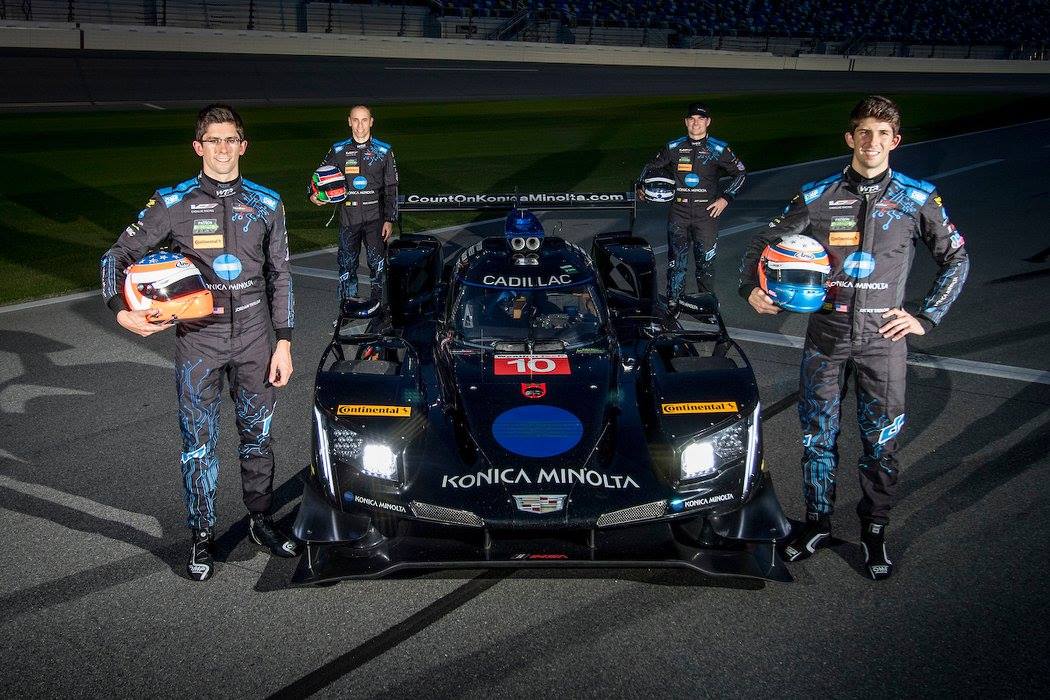 Jeff Gordon takes about his new drive in IMSA SportsCar racing, “Obviously the biggest change is this car and the prototypes and how they’ve evolved. Like Wayne said, I am having a blast. It’s been a dream of mine to be able to not just drive a car like this, but compete out on a track with a team and a car like this. This is a lot of fun for me. I treat this as if I’m a rookie. I’ve done this race only one other time, so just tap into this team and our teammate’s and Max’s efforts.

He continued, “I’ve been part of this process for the last year or two listening and talking with Wayne and Max and then of course for the last few months getting to know Ricky and Jordan by testing with them. It’s been an amazing experience. I must say that getting behind the wheel of a car that brakes and corners like that is kind of eye-opening to me, but at the same time is so much fun. I can’t wait to get out there.”

The goal, “Nothing would make me more proud and honored than to be able to be part of that effort that gives Wayne that win as a team owner and Max and all these guys. They’ve put their heart and soul into it and they have a fantastic team and I think we have a fantastic car and hopefully driver lineup too to go along with it.”

I never said I was retiring.

Jeff was in and out of the NASCAR cup car last season driving for the injured Dale Earnhardt Jr, “Yeah, because what I learned right away getting back in the car was just being around the intensity of how you have to push the limits of the car, yourself, restarts, being around other cars and being in the intense competition.”

On if that helps with the 24h at Daytona, “Actually, the very first race back I ran in Indianapolis I said to myself I’m so glad I’m doing this, because this is going to help me for the 24 hour race because I felt like if I just came here to this race without racing over the year I think that it would have probably been a little bit too much newness so that really did help me prepare.”

On adding a Rolex 24 win to his resume

“Well, I’ll be honest that would be special, but that’s like icing on the cake. I haven’t thought a whole lot about that. I’m really just approaching it as…these kids (Ricky & Jordan Taylor) force me to have fun, especially this one to my side here (Jordan Taylor). I was happy to get one over on him for a change yesterday (laughs). I’m a very serious competitor and they are too, but they like mix it up and have fun and I love that.”

He continued, “I want to have fun, but I’m really only going to be having fun and have a smile on my face if we’re on that podium in the number one position when this race is over. So, I’m pushing myself to be as strong as I can possibly be. I never like to be the weak link in an organization or a team and I’ve got three phenomenal drivers here that are going to push me. I’m enjoying it very much and having fun, but this is a race that I would love to win not for those reasons, but just because this is a special event just on its own let alone whatever historical things could come along with it.” 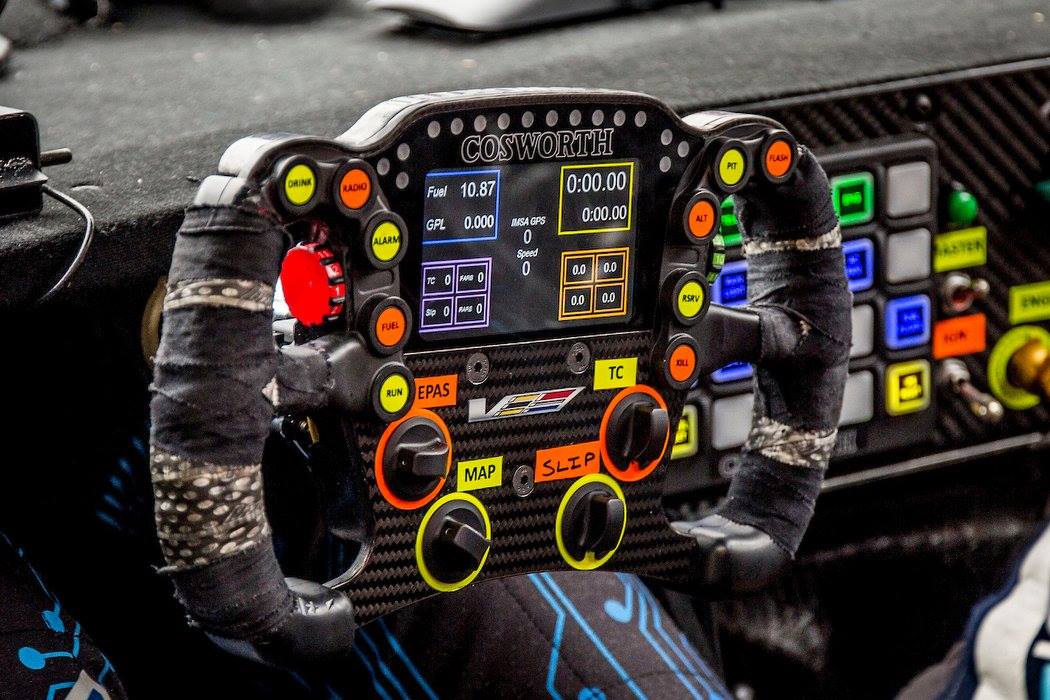 The IMSA SportsCar steering wheel has a lot of buttons

“All the laps that I get, I don’t know if I could do another race just because the amount of time I get to be in the car from the first test we did in Charlotte to the test we did here in December and now this test it really allows me to not just feel the car out, but to learn all the buttons on the steering wheel, drive around other traffic, learn the track, there’s so much to take in, but the amount of laps I get really help you.”

“Yea, those other instances were not expected. I really didn’t even think it could happen until then, but Rick Hendrick talked me into it. Wayne, as he mentioned, I meant every word that I said to him when I left this race in 2007. I really wanted to put all my efforts into my Cup career and I thought I had another championship in me and I came close, but unfortunately that didn’t happen.”

“I always felt like that if I could come back and drive for a team like Wayne’s. I didn’t know I was going to get to drive as cool of a car as this Cadillac Dallara is, but I’d hoped that opportunity would present itself again and when Wayne called I was excited about it, because I feel like this is a race that because of the amount of time I can spend in the car, that it’s doable. I don’t foresee that happening with any other races, but yeah if the right opportunity comes along I’ll certainly look at it seriously.”

What excites Jeff Gordon about the Rolex 24?

“I think the race is itself is self-explanatory. The history. I was over in the tent here where they serve food earlier and they had a video from Le Mans, from the 24 hour race here and just watching the history of sports car racing and what this race means to a race car driver to compete here and to win.”

He continued, “I know what that means to NASCAR for the Daytona 500, but I have a pretty good sense of it, because I’m just a huge race fan. I’ve always been a huge race fan of all different types of motorsports, and so I have memories of watching cars go around this race track competing in this race on TV or in magazines. My path took me to sprint cars and then on to NASCAR, but my passion for cars, especially this type of car, the prototype car is one that I always hoped that I’d have the opportunity to drive and now I get to do it in one of the greatest races that exists.” 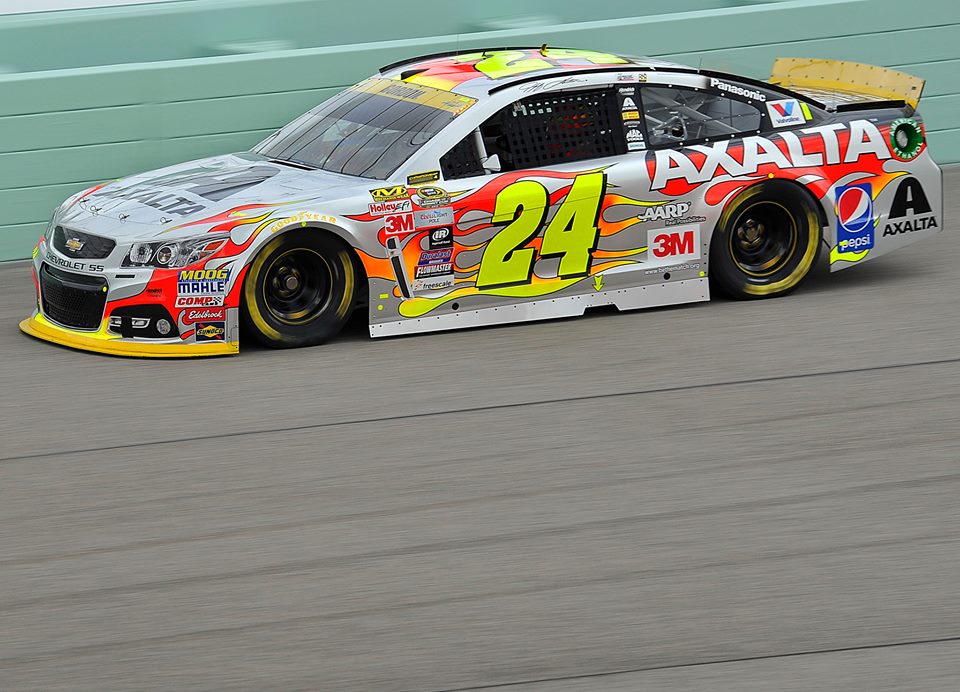 Jeff Gordon on his retirement

“Yeah (laughs). I never said I was retiring. I knew I’d be working probably as hard or harder post-driving post-NASCAR Cup series driving. I just really love opportunities. I love trying to see what the next chapter in life is and luckily I’ve had some amazing opportunities and thanks to Wayne and Max for this opportunity, FOX for that opportunity. I’m really excited that they’re covering this race. They’ve got a heck of a month coming – the Super Bowl, this race and then the Daytona 500 to kick off the NASCAR season.”

More on his broadcasting venture, “I’m proud to be part of both sides of the team there and this race I think is going to get a lot of coverage because how much effort they’re (FOX) putting into their motorsports program and me being here hopefully I can add a little bit to it as well and take some momentum from this into the Daytona 500. A lot of cool things that are happening in my life. I couldn’t have predicted all of them, but I’m having a lot of fun.”

How does Jeff Gordon train for a 24 hour race?

“I can tell you the first lap I made at Charlotte when we tested at Charlotte Motor Speedway which was of course the first time I drove the car and I got fitted into the seat. That got my attention. Definitely. The G-forces, when you’re not used to pulling those types of G-forces whether it be cornering, accelerating, braking, it kind of makes your head spin a little bit and so that first time I actually got a little bit light headed and I was like, “Whoa!”. Then, you get used to it and you start really being able to focus on the details.”

Training has been up’d, “I’ve definitely had to step up my training. There’s a friend of mine who is involved with Equinox, so I’ve been working with one of their trainers remotely through the internet where they go everywhere I go. I’m doing that two or three times a week. I was skiing over the offseason. I really ran a lot of runs trying to build my legs up for this brake pedal (laughs) I’ve got to push so hard for however many stints I end up being in the car.”

Cardio is important, “Physically, yeah I’m definitely having to do a lot of cardio. This car pulls a lot of Gs and makes you work a lot harder than, it’s not as hot inside the car as a stock car, but definitely puts a lot more load on your body. Yeah, I’m trying to get myself in as good of shape as these young kids here. Chasing them around lap times and physically.

“Well, when I talk about passions and dreams there’s no doubt. The difference is I’m very realistic. I think Wayne and I have had a lot of conversations about that and I’ve had conversations with GM about it.”

What about Le Mans, “Le Mans is a much different animal. You can’t go there and spend time in the car and get all the laps. Yeah, there’s driver simulators these days that would help out, but I want to see how this goes and I want to be very realistic about anything that I get behind the wheel of. If I feel like I could be well prepared and understand the cars and the team and the track, then maybe, but right now I’m just focused on this race.”