DETROIT —  Toyota teams competing in the Monster Energy NASCAR Cup Series in 2017 will have a different look as the auto manufacturer has redesigned the Toyota Camry for the upcoming racing season to reflect the product that will arrive on the showroom floor later this year.

The new 2018 race car model, which will be used starting in the 2017 season, was unveiled Monday during the North American International Auto Show held at the Cobo Center in Detroit. The Camry race car was displayed along with the newly designed ’18 Camry production car. 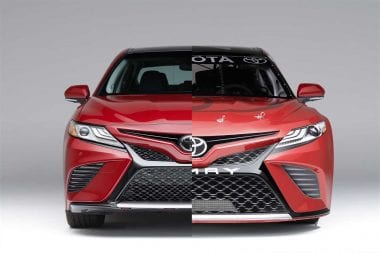 “(It) is probably the most aggressively styled Camry in the history of (the model),” said Ed Laukes, vice president of integrated marketing operations for Toyota Motor Sales, USA.

Toyota teams have won one championship, 30 races and made 10 total Chase appearances with six total drivers since 2015, the last time the automaker made any significant changes to its on-track product.

This past season, its teams won 16 races, the most since the company began competing at NASCAR’s top level in 2007.

One of the significant, although not visible, differences in the race car version is that NASCAR teams were involved in the process much sooner than with previous models that went from dealership to race track.

“Largely the first two shots at this (in 2013 and 2015) Toyota, TRD (and) Calty (Design Research) ultimately were responsible for the design and the initial performance,” said Dave Wilson, president and general manager for Toyota Racing Development, USA. “Then in the process you hand it to our team partners and they develop it further. 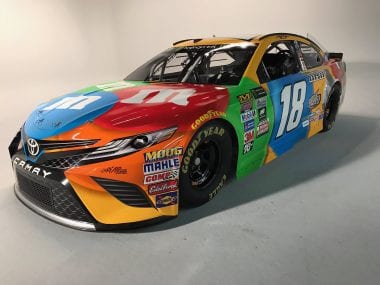 “This go round … we involved our team partners much earlier in the process and had them work with us side-by-side as we’re designing this because again, they’ve got very, very smart aerodynamicists.”

The intent, he said, “is to be able to hit the ground running at Daytona (in February) , being further along than we have been with the past two generations.”

“What’s better? It’s the same box of downforce and drag; every time a manufacturer has a shot at building a new car, evolving a new car, you try again, you work closer and closer to the corner of that box, and that’s the lowest drag and the highest downforce,” Wilson said. 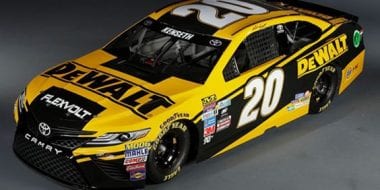 Changes to the car that was used in competition from 2015-16 focused on the front end, and Laukes said those changes were necessary to “be relevant to what’s on the street.”

“So we spent the resources … because we wanted to be relevant to that Camry (street car),” he said, even though the initial work on the 2018 model had already begun.

The 2018 production Camry is scheduled to go on sale to the public in August.