On Saturday night the RUSH Dirt Late Model Series 2017 schedule was previewed. It was announced at the RUSH Racing Series awards banquet. 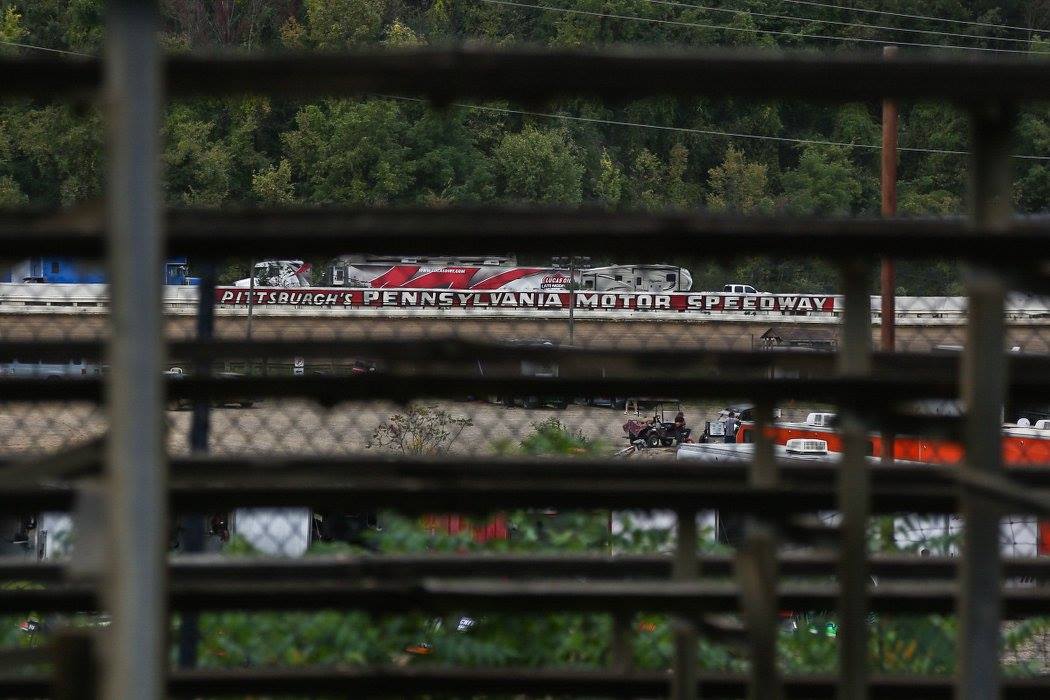 (Edinburg, PA)…While the 2017 racing season is only a few months away, Sweeney Chevrolet Buick GMC RUSH Racing Series Directors Vicki Emig and Mike Leone put a final wrap on the 2016 racing season with the annual awards banquet and dinner on Saturday night at the Gatherings Banquet & Event Center in Edinburg, Pa.  Spring like conditions in the 60s prevailed as a record number of attendees filled the beautiful banquet hall as over $115,000 in cash and thousands in contingencies were distributed to Sweeney RUSH Late Model, Sportsman Modified, Pro Mod, and Pro Stock racers.

The Sweeney RUSH Late Models scheduled events at 22 different speedways in 2016 with over 350 different racers participating in either a weekly-sanctioned and/or touring series event!  Year three for the Sweeney RUSH Sportsman Modified season saw six different speedways hold events with a record 43 different drivers competing in 36 different cars with a record turnout of 29 cars at the season ending “Steel City Stampede”.  The Sweeney Pro Stocks continued in year two of their Weekly Series, while the new Sweeney Pro Mods debuted with weekly competition at Stateline. 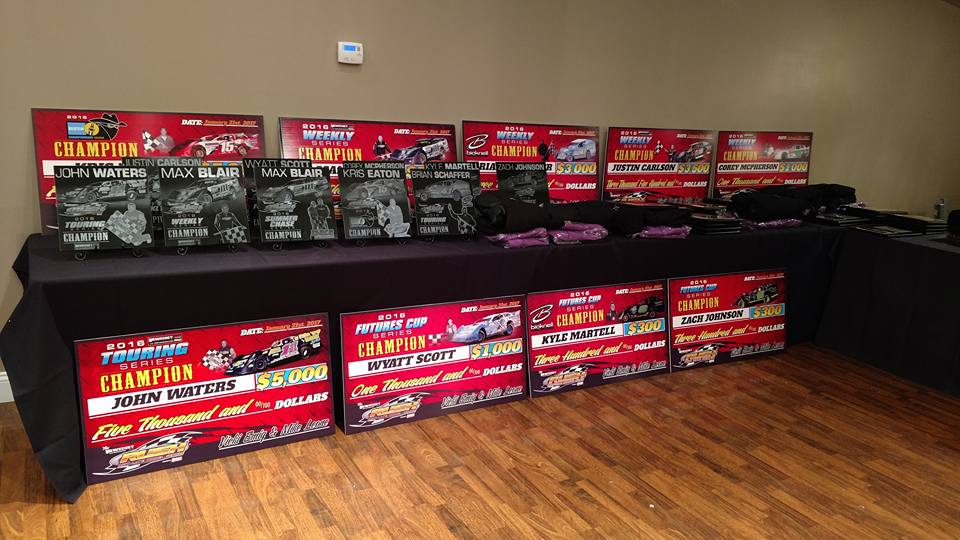 For the first time in his career, John Waters is a RUSH Champion.  After waging a battle with good friend and fellow New Yorker Bryce Davis throughout the season, the Whitesville, NY driver would earn the $5,000 Sweeney Tour championship by just seven points.  Waters started the year off red hot winning the opening two events at Humberstone and Merrittville Speedway, added another win at Expo Speedway, and ended the season with just one finish outside the top 10.  Waters ironically tied for sixth with Davis in Sweeney Weekly Series.  Overall, Waters earned $6,350 in RUSH point fund monies to Davis’ $4,900.  Waters also received a special marble award inscribed for his amazing accomplishment of winning four of the last five Touring Series events in Canada including three straight at Humberstone!

Max Blair left Saturday’s banquet as RUSH’s top point fund earner once again by garnering $8,150- much in part from his third Sweeney Weekly Series Championship ($5,000) in four years and his second Pace Summer Chase title ($3,000).  The Centerville, Pa. 27-year-old focused more on Super Late Model racing in 2016 rather than following the Sweeney Tour, but did win in both starts in addition to his father Rob winning in his car.

The third top earner was Kris Eaton at $5,700.  The Winchester, Virginia racer won year two of the “Bilstein Bandits” program for the $5,000 paycheck.  Eaton won twice at newly-sanctioned Path Valley Speedway Park and added a win at his home track, Winchester, but impressively recorded 22 top 10 finishes in 24 starts.  Eaton won’t look to defend his title as he plans to get his daughter started in go-kart racing.

Greg Beach ended Tony White’s run at two consecutive “Wheelman” Bonus Event Challenge Series titles.  The Chicora, Pa. driver won the non-qualifier at Lernerville, the track he grew up racing Stocks at, and had two other top 5s.  Beach received $200 cash and $200 in K&N gift cards in addition to his championship jacket and hardware.

The top five in RUSH member points at each RUSH Late Model weekly-sanctioned track shared in $800 cash ($300,200,100,50) with positions six through eight receiving contingencies that will be mailed out as part of the new “Track Pack” Weekly Bonus Program.

Brian Schaffer had a stellar first season competing in the Sweeney RUSH Sportsman Modifieds joining his cousin Will and uncle Jerry Schaffer in competition.  The Boyers, Pa. driver competed in all 27 events and finished the year with only two finishes outside the top 10!  He won twice at Sharon and once each at Lernerville and Thunder Mountain, which propelled him to the $3,000 Bicknell Weekly Series championship.  Though he failed to win a Bicknell Tour event, his consistency led him to the $800 title beating Chas Wolbert by a mere three points.

Second year RUSH racer Kyle Martell had a tremendous season.  The 16-year-old Rootstown, Ohio driver finished in the top five 17 times including at least one at all six tracks the RUSH Sportsman Mods raced at.  His first career win came at Sharon on June 18 that started a strong of an impressive seven straight top four finishes.  Martell finished in the top five in all three of the Bicknell RUSH Sportsman Modified point funds including the “Futures Cup” title, a tie for third in Weekly, and fourth in Touring.  All six “Futures Cup” racers were in attendance at the banquet that also included Jeremy Weaver, 12-year-old Blaze Myers, Preston Cope, Amelia Clay, and Jacob Jordan.  Fourteen-year-old David Kalb, Jr., who took in the banquet, will be a new racer becoming part of the 2017 “Futures Cup”.

Justin Carlson will go down in the history books as the inaugural champion of the Sweeney RUSH Pro Mods.  The Sherman, New York veteran E-Mod racer was attracted to the affordable class due to the point fund that he capitalized on taking the $3,500 Weekly Series crown by winning eight features.  During the homestretch he failed to finish worse than third after July 2 including a run of four straight wins!  Carlson beat out veteran Scott Gurdak, who won the Stateline track championship, by 15 points.  Gurdak did double duty and also collected point fund monies from the RUSH Late Models.  Fourteen-year-old Zach Johnson of Busti, NY finished eighth in Weekly Series points, but more importantly captured the first ever “Futures Cup” honors and earned $300. 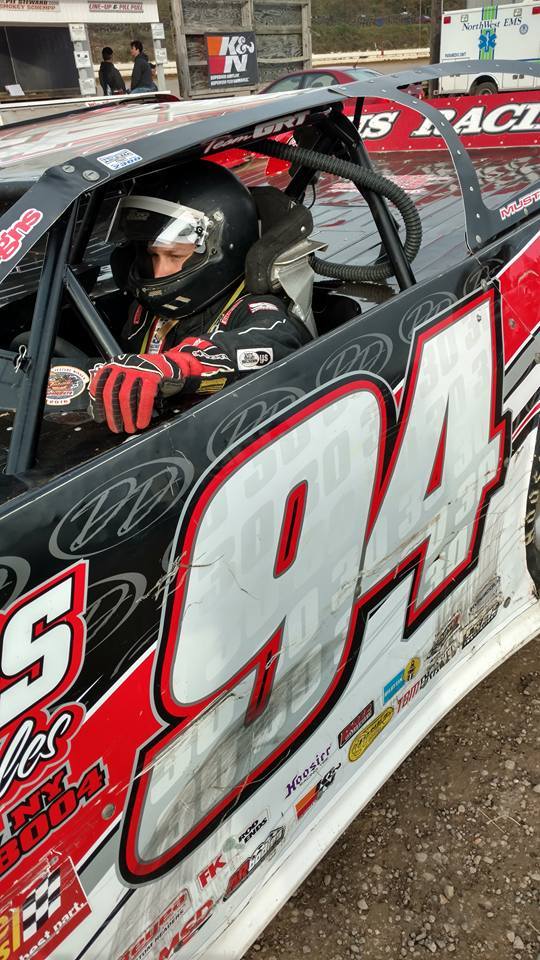 The highlight of the program was the special awards ceremony.  The Series’ major sponsor, Sweeney Chevrolet Buick GMC/Pace Performance, was recognized with a special appreciation plaque for their continued support of the Series as was Bicknell Racing Products for their second year presenting the Touring, Weekly, and “Futures Cup” programs in the RUSH Sportsman Modifieds.

The new “Legacy” Award was started to honor historical significance as RUSH directors Vicki Emig and Mike Leone have completed their 10th year of directing crate engine racing in the Northeast. The inaugural award winners were the former promoters of Raceway 7 (Ron Nielson) and McKean County Raceway (Rich Yeager, Ken Leet, Tom Gleason & Rod Biehler) as they were two of the first four tracks to commit to running Crate Late Models in the 2007 season.

Tony White was presented the prestigious Gary Knollinger Memorial “Golden Award”.  The Aliquippa, Pa. driver reminded Series Officials much like the Knollinger Family with the late Gary, Jr.  White completed his first season Touring finishing ninth in points and did it much like Knollinger did- with a limited crew featuring just his father and wife, and in a quiet and unassuming way.

The “Majestic” was awarded to RUSH’s pit steward and point keeper, Rich Yeager.  The Little Valley, NY resident was coming off his run at promoting McKean County Raceway and joined the staff in 2013.  His duties have increased becoming point keeper in 2014 and that task has grown year with the addition of new divisions and championship programs.

The “Car Owner of the Year” Award was won by Dale LeBarron.  The Troupsburg, NY resident rarely attended those races run by his driver John Waters as he was back home working, but gave Waters everything he needed to have a tremendous season highlighted by the Sweeney RUSH Late Model Touring Series Championship along with several other wins and accomplishments.  LeBarron joked, “If you need a tax deduction, hire John Waters!”

The “Miles Traveled” Award was given to driver Dave Lyon and his uncle and car owner, Gary Lyon.  The Spring Creek, Pa. duo ran more RUSH-sanctioned races (43) than any driver in the four divisions.  Not only did they race a lot, they traveled to do it as they completed their first season of following the RUSH Late Model Tour.  They were also successful winning a weekly race at Stateline and recorded 20 top 5 finishes.

Steve Damon of Steve’s Auto & Truck Repair was awarded the second annual Bill Hendren Memorial RUSH Engine “Rebuilder of the Year”.  The Little Valley, NY businessman has been part of crate engine rebuilding since the inception and has been a strong supporter of RUSH.

Velocita-USA provided $100 gift cards to every “Futures Cup” racer in all four divisions.  A 50% off gift card for a custom driver’s suit drawing was for all RUSH Pro Mod members, and the lucky recipient was Scott Gurdak.

While no Touring Series programs will be held for the Pro Mods or Pro Stocks, the Pro Mods will see weekly competition added at Bradford Speedway on Sunday nights and special events at McKean County Raceway, while Lernerville Speedway becomes the first track to fully sanction their Pro Stock division under RUSH.  John and Christine Stivason photographed the event and the photo link will be posted as soon as it’s available.

*Schedule is subject to change.  Additional date(s) may be added.