INDIANAPOLIS (Feb. 2, 2017) – For the past 20 years, Donny Schatz has attacked the terrain of dirt tracks all across the United States in his quest to become the best Sprint car racer in the world. The driver for Tony Stewart-Curb/Agajanian Racing (TSR) is coming off his eighth World of Outlaws (WoO) Craftsman Sprint Car Series championship and is looking to continue raising the bar this season in grassroots racing’s most challenging series with a new partner that shares his passion for reaching greatness and possesses a mindset without limits.

Arctic Cat, a world leader in designing, engineering and manufacturing all-terrain vehicles (ATVs), snowmobiles and recreational off-highway vehicles (side-by-sides or ROVs), announced today a partnership with TSR and Schatz that includes primary sponsorship of the TSR No. 15 Arctic Cat J&J that the Fargo, North Dakota driver will compete with at more than 90 races from coast to coast in 2017, beginning next week in Florida. In addition, Arctic Cat will also be co-primary sponsor on the TSR No. 14 that Tony Stewart will pilot in more than 50 races on dirt in 2017.

The relationship aligns Arctic Cat, one of the most widely recognized and respected manufacturers and marketers in the powersports industry, with the most decorated driver in short-track racing over the past decade. 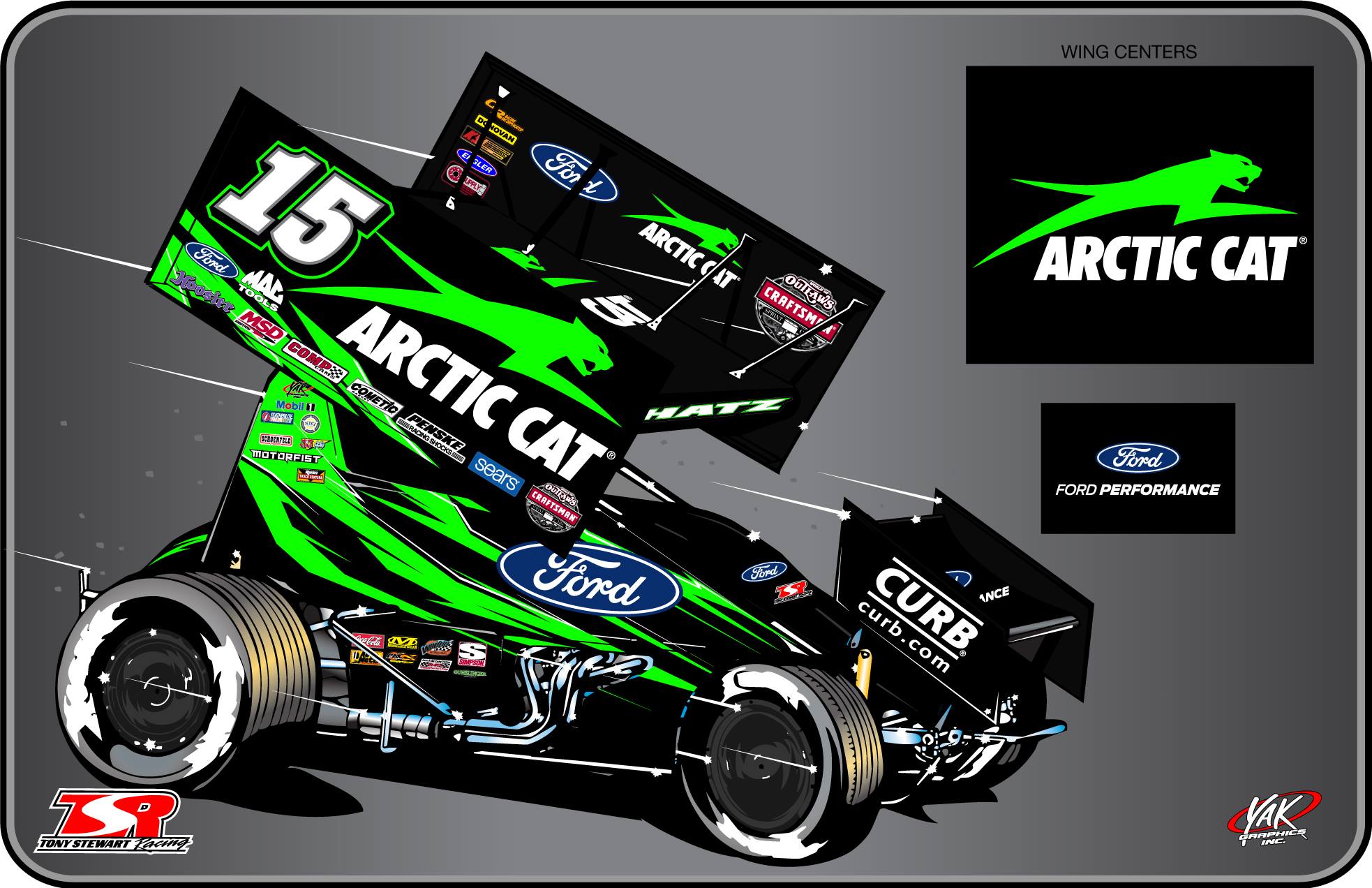 “We are extremely excited today to announce the partnership between Arctic Cat and Tony Stewart Racing,” said Greg Williamson, chief marketing officer, Arctic Cat. “This is a truly unique opportunity, by partnering with Tony Stewart Racing, which sets the standard in short track racing, and Donny Schatz, the best driver in Sprint car racing, we continue to reinforce our commitment to be the best in everything we do. Donny is not only a great racer, but an Arctic Cat customer who uses our vehicles both for fun and to get work done when he’s not behind the wheel of his 900-horsepower Sprint car. He, along with the people who live and breathe Sprint car racing are a great fit for our brand. This partnership puts us in an ideal environment to showcase the Arctic Cat line of products and welcome everyone to the wide world of Arctic Cat.”

The connection with Schatz was a natural for the Minnesota-based company as both share Upper Midwest roots and a passion for power sports. Schatz has risen from a North Dakota teenager who learned his trade circling dirt tracks in his home state, as well as Minnesota and Wisconsin before heading out on the road and racing full-time with “The Greatest Show on Dirt”. Through his unyielding desire to compete Donny has become the most accomplished driver over the past two decades with the WoO. After spending the first 11 years of his career driving for his family, Schatz teamed up with three-time Monster Energy NASCAR Cup Series champion Stewart and TSR in 2008, and he continues to build his legacy. He’s won every major Sprint car race, including the sport’s signature event – the 5-Hour Energy Knoxville (Iowa) Nationals – nine times, and has won eight WoO titles in the last 11 seasons, including the last three. Schatz is the third all-time winningest driver in the series’ 39-year history with 229 triumphs and last season he became the first driver in series history to win more than 20 races in four consecutive seasons.

“I’ve been blessed to be around incredible people throughout my career and I’m so excited to be joining the Arctic Cat family,” Schatz said. “It started with my parents giving me the chance to pursue a dream of becoming a World of Outlaws driver and then Tony coming along and bringing me into his organization. We’ve worked extremely hard to be the best and are always striving to find ways to get better. I’m not sure I have the words to accurately describe my emotions about getting to drive the Arctic Cat 15 this year. I’m blown away. They are a company that’s from right up here in my neck of the woods and I’ve been on Cats for as long as I can remember. Whether we were working my grandpa’s farm or tackling the snow for fun, Arctic Cat has been a big part of my life and now we get to venture into another chapter together. We’ve got a motivated group of people at TSR ready to attack dirt tracks across the country with a black and green racecar. I can’t wait to start this ride.”

The partnerships with TSR for Arctic Cat continue the brand’s involvement in short-track racing. Both Schatz and Stewart will make their 2017 debut next week in the Arctic Cat All-Star Circuit of Champions-sanctioned Bubba Army Winter Nationals at Bubba Raceway Park in Ocala, Florida. The event also kicks off Arctic Cat’s second season as title sponsor of the Sprint car series owned by Stewart.

“I’ve been involved with racing most of my life and one thing that has been a constant throughout is the importance of relationships,” Stewart said. “I’ve had the pleasure of working with and getting to know the people at Arctic Cat over the past decade and, like I said when they renewed their partnership with the All-Stars, we are family. To have Arctic Cat continue being part of the All-Stars’ family for the next two years is something I’m really proud of. And I’m honored to see that relationship carry over to our TSR teams and have them aligned with Donny Schatz and the crew we’ve assembled on that 15 team. It’s a potent combination and one that’s aiming to continue to set the standard in Sprint car racing. I’m excited I get the chance to do some Sprint car racing this year myself, and having Arctic Cat as part of the ride is an added bonus. We’re beyond honored to be part of something like this.”

Donny Schatz Driver of the No. 15 Arctic Cat J&J in the World of Outlaws Craftsman Sprint Car Series

Fans are encouraged to follow the progress of Schatz, TSR and the No. 15 Arctic Cat J&J throughout the campaign on the Web and social media. More information can be found at www.TonyStewartRacing.com,www.arcticcat.com, and www.donnyschatzmotorsports.com.