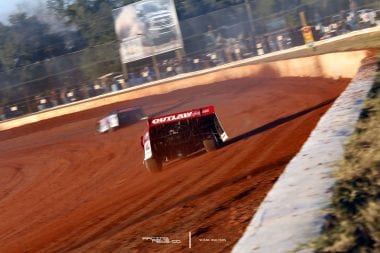 The LOLMDS race winner is a Georgia native, winning in his home state. Overton, The 25 year old led just over 10 laps of the 50 lap main event before driving to victory lane.

Billy Moyer Jr started his night off on the correct foot. With his right foot, he set quick time at Golden Isles Speedway with a 15.423. He carried that speed into his heat, where he led flag to flag.

It was Billy Moyer Jr’s race to lose, he did.

Scott Blomquist brought a bit of chaos with him to the LOLMDS event tonight. The zero hauler showed up several hours late to the GA dirt track. Missing hot laps, qualifying and and then his heat race, Bloomquist made it just in time for the B-Main.

He was offered a provisional starting spot at the tail of the B-Main. He went nowhere. Expected as it’s very difficult to immediately get up to speed with guys who have been running the Golden Isles Speedway surface for two days.

Clint Bowyer isn’t impressed. The NASCAR driver and LOLMDS team owner commented on Scott Bloomquist, after he appeared in the ‘Super Bowl of Racing’ main event.

If the champion can’t seem make pre tech or hot laps or hell even qualifying. He shouldn’t get a provisional. Number says it all. #sickofit

Billy Moyer Jr started the main event on pole, where he’s been all night. He led until he reached lap 37.

That’s when he caught Bloomquist. He paced behind him for several laps, content as there was little pressure from Overton in second or McCreadie in third. 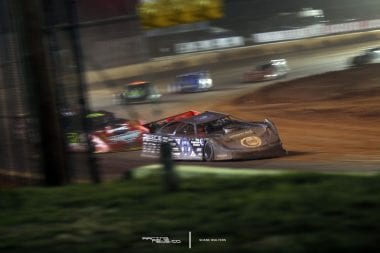 However, the leader has caught the tail of the field. Lappers have just become a factor in this race.

A mass amount of moister on the inside line creates a bottom feeder racetrack. That forces everyone into 1 follow the leader groove.

It means you need to be aggressive to make a pass. Even if you’re just trying to put someone a lap down. Billy Moyer Jr is safely riding behind Bloomquist. He’s not pressuring him that hard to get by, just riding.

Until Bloomquist slipped on the entry of turn 1. That stacked up the leaders behind the tail of the lead lap, Bloomquist. It allowed Brandon Overton to look inside of Billy Moyer Jr for the lead.

At the same time, Billy Moyer Jr put a nose under Bloomquist. He’s not looking to give up the lead while riding behind a lapper. He needs to move passed and resume his race. Moyer inside Bloomquist, just barely. Dirt late models don’t have mirrors, Bloomquist comes down across the front nose of the leader. 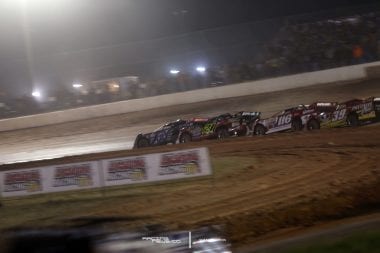 *The photo here shows the wreck just as the spin is beginning.

Bloomquist spins and fails to restart. The Zero machine is pushed to the pits. Meanwhile, Billy Moyer Jr continued moving but he’s pulled from the lead and parked on the front straight away.

Possibly just asking an official to check the damage? Maybe ask him to pull out a fender?

Nope. It’s not good, smoke is now pouring out from under the hood of our leader. He’s also pushed to the pits. A blown radiator has taken Billy Moyer Jr out of the race following contact with Bloomquist.

Brandon Overton restarts as the leader. No pressure from Tim McCreadie, behind. He cruises to victory. The 25 year old wins the first race of the 2017 Lucas Oil Late Model Dirt Series in a surprise victory. Jimmy Owens claims 3rd.