The NASCAR champion made his official return to sprint car racing on February 9th, 2017. That was the beginning of 3 race weekend at Bubba Raceway Park sanctioned by the All Star Circuit of Champions.

The #14 machine showed up to the racetrack alongside his dad, girlfriend and his puppy. Barricades were in place around the Tony Stewart pit. A NASCAR champion of any era draws a big crowd, he understandably wanted some space. I think anyone in their right mind could totally understand that.

The night wasn’t complete without a bit of drama. Tony Stewart had a brief argument with an official, Tony didn’t get the conversation he was looking for. That led to a driver-to-driver argument with Chad Kemenah. Tony claimed he was purposely blocked. He drove to the Kemenah pits to confront the driver. Drivers arguing over space on the racetrack is a somewhat normal thing, they agreed to disagree.

Tony Stewart raced the first two sprint car events. He originally missed the A-Main which resulted in Tony Stewart slamming his helmet on a table within his hauler. On a positive note, he raced his way in through the B-Main, without a gimme provisional, unlike Bloomquist. Tony Stewart finished 17th in his debut return to dirt racing. He followed that result with a 21st place finish on the following night.

Saturday, he withdrew his entry. 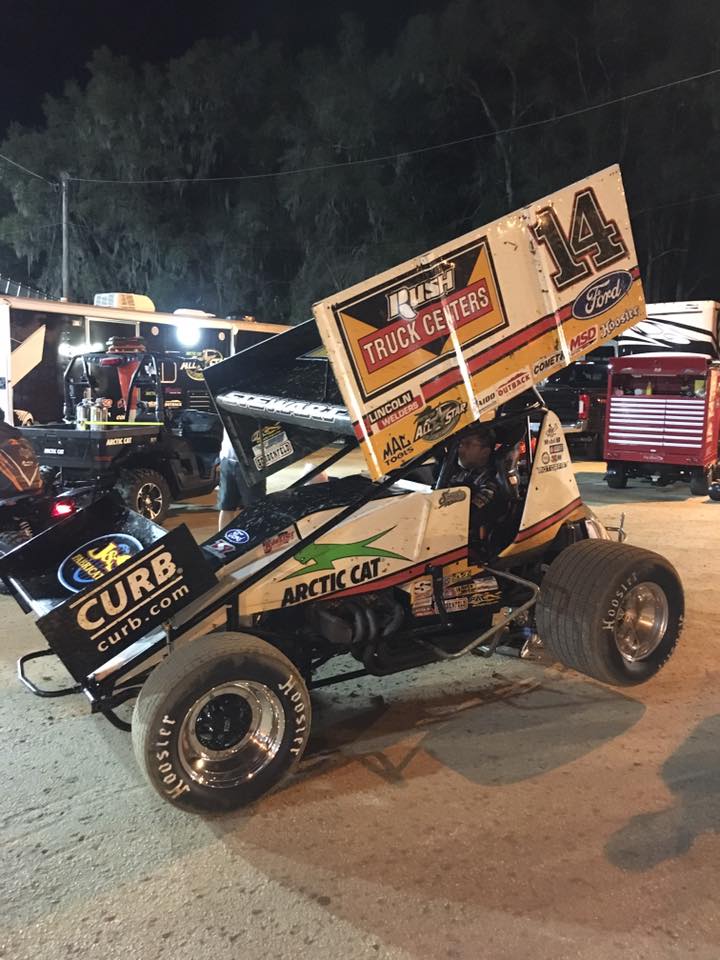 Tony Stewart Racing took to twitter. Informing fans Tony would not be racing the final night at Bubba Raceway Park. They said, “Tony Stewart is a scratch for tonight’s @ASCoC event at @BubbaRaceway & will not compete. Schatz will go out 9th in Group 1 for qualifying.”

The team later issued a more detailed statement to Speed Sport. That statement, “Tony Stewart has scratched for the evening and is reconsidering his schedule with the All Star Circuit of Champions due to his ownership of the series. Requirements of owning and managing the series supersede his own driving ambitions. We apologize for the change in tonight’s schedule and appreciate everyone’s understanding.”

As a driver, sometimes you’ll have disagreements with officials, on many things. In this case, those disagreements are with his own employee’s. That’s an awkward position for everyone to be in. It’s likely following this incident, those possibilities have become aware to Stewart. A big part of what might have led to his possible withdrawal from the entire dirt series.

Furthermore, I could understand why it might be conflicting to race in a series that you own. I could see many issues arising from that. Specifically related to fans screaming ‘favoritism’. There likely wouldn’t be any ‘favoritism’ going on, the ASCOC is a well managed racing series, but that won’t stop fans from claiming it anyway.

This was the first weekend of a busy dirt racing schedule for Tony Stewart. At the Chili Bowl several weeks ago, he spoke on his upcoming schedule. At that time he had 71+ races already on the schedule, with plans to add a few more.

However, things might have changed after withdrawing and leaving the racetrack, on his first weekend back. That schedule might decrease, running a few less sprint car races. Or, he could fill it with a new set of dirt racing events. That info is still to be determined.

His teammate, Donny Schatz won two of the three races at Bubba Raceway Park. The Tony Stewart Racing #15 took the win on Thursday and again on Friday. Tony Stewart must have been his good luck charm because after Tony left the speedway, Schatz finished 2nd. Still a fantastic weekend for Tony Stewart Racing.

Recently, Tony Stewart has been dragged back into the court process by the Ward Family. That civil lawsuit stems from the sprint car incident several years ago that resulted in the death of young sprint car driver Kevin Ward Jr. A mediation date of the Kevin Ward Jr Family vs Tony Stewart was set.