The family of Kevin Ward Jr claims the incident could have been avoided. If Tony Stewart ran the line of the 6 other cars around Stewart, their son would still be alive, states the family. They claim it was either intentional or a reckless attempt to scare Kevin Ward Jr as he walked down the track.

We are now hearing new voices in the case. Those include, Jessica Zemken-Friesen who is the ex-girlfriend of Tony Stewart. She was trailing Tony Stewart at the time of the incident.

The Ward family cited Tony Stewart’s deposition, “Stewart confessed that he did not need to throttle his car to make it turn. Anticipating the impact, Ward Jr. put his hands up in a defensive position and desperately scrambled to get out of the way. Based on the evidence and reasonable inferences drawn therefrom, Stewart either intentionally hit Ward Jr. with his car or intended to execute a reckless maneuver in an effort to scare or humiliate Ward Jr.”

Crash analysis was written by Gordon Engineering. On Tuesday, the family of Kevin Ward Jr have submitted that data. It basically states that the sprint car driven by Tony Stewart re-acted differently than the other cars that drove passed Kevin Ward Jr. The family states it could have been avoided has Tony Stewart “remained relatively stationary and remained outside the path where six preceding sprint cars had passed.”

They feel it was deliberate. The report states “It is apparent Mr. Stewart intentionally caused his vehicle to move toward Mr. Ward by aggressively adding throttle input while counter steering through the turn. Mr. Stewart’s speed, acceleration, heading angle and vehicle path towards Mr. Ward was different than the six cars that passed Mr. Ward’s location without incident.” 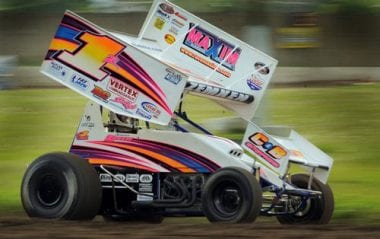 The ex-girlfriend of Tony Stewart spoke in the case deposition. Jessica Zemken-Friesen, who formerly drove for Tony Stewart Racing stated, “I could see Tony’s left front wheel turn to the right, closer in the direction of where Kevin was up higher onto the racetrack. … I could see Kevin still there in front of his car with his hands in the air,” she said in the Aug. 18 deposition. “And I saw the rear of the car stand up and the dust come off the rear tires as Tony hit the throttle.

She continued, “When he hit the throttle, the rear of the car came around and the front end of the car went to the left, the car got sideways and he struck Kevin.”

The Ward family argues that Kevin Ward Jr did not die on impact. Furthermore, they argue against Stewart’s statement that Kevin Ward Jr has “no fear” as he approached Stewart on track. This is where the marijuana comes in, Stewart’s lawyers claim it influenced his actions. The Ward family thinks otherwise, “Video evidence and eyewitness testimony easily demonstrate that Ward Jr. braced himself for the severe impact and even made a desperate, yet futile, attempt to scramble out of the path of [the] car.”

Five NASCAR penalties handed to Tony Stewart are included in the family’s report. One of the larger bullet points was Tony Stewart’s issues with fellow NASCAR driver Kurt Busch. A situation where Tony Stewart punched Kurt Busch inside of a NASCAR hauler. Tony Stewart spoke on that incident in February 2008, “Basically, he was antagonizing us in front of the NASCAR officials and very inappropriately.”

The Ward family claims their son refused to be bullied, “This case exemplifies what happens when a superstar race car driver with a documented history of violence on and around the track races against competitive amateurs who refuse to be bullied. In this case, Defendant Tony Stewart plays the part of the volatile superstar. Although Stewart is a highly skilled driver who easily could have avoided killing Ward Jr., he also has a storied history of violence both on and off of the track.”

I’ll be happy when this is over. I’m tired of writing about it.