Wouldn’t it be great to see a 3-time F1 World Champion running a NASCAR race?

He’s wanted to, for years. Until this weekend we haven’t found out exactly why he can’t make it happen. After all, a 54-time F1 winner (2nd only to Michael Schumacher) shouldn’t have a problem finding a NASCAR seat.

In 2015, Lewis Hamilton expressed interest in running an official NASCAR race. That interest stemmed from a impulsive trip Florida. It was Jeff Gordon’s final race, Lewis sat on-top of the pit-box. At that time, it peaked his interest in the American racing series. 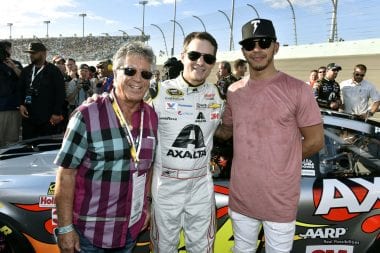 “I’m a big fan of his. He’s a legendary dude and a really nice guy. We have always been very supportive of each other, messaging each other after our races and so on,” Lewis Hamilton told the BBC in 2015.

“He [Jeff Gordon] told me that this was his last year and I thought, ‘I’ve got to make it to a race because I’ve never been to a NASCAR race before. So I dropped everything I had and flew out to Florida just for that day and had an amazing time.

So what did he think? He addressed the press post-race, “It made me want to drive one, I really fancy a race in NASCAR one day. I’m not sure I’d do an oval but possibly a street circuit or road course.”

Those words were spoken in November 2015. Since then, nothing has come to the surface as far as a scheduled NASCAR race for Lewis Hamilton.

Why? Unfortunately, the dreams of the Mercedes-AMG Petronas F1 Driver have been shut down by his day-job boss, Mercedes. Over the weekend, Lewis Hamilton told the fans it’s because Mercedes doesn’t have an engine in any of the NASCAR series.

You get shut down because Mercedes doesn’t have an engine

“I’ve tried to do a NASCAR race at some point during the season. You get shut down because Mercedes doesn’t have an engine in NASCAR.”

The great drivers of the past have become cross-over drivers. It appears the times have changed in the previous 10 years, “We should be allowed to do more than one series. I would like to do MotoGP. I’d love to ride a MotoGP bike — or a NASCAR race, like the Daytona 500.”

So, as of now, it appears we won’t see much of Lewis Hamilton in NASCAR. At least, not until we see a Mercedes engine in the stock car racing field.

Romain Grosjean and Kevin Magnussen on the other hand, certainly have a much better chance. They have a ‘mostly’ conflict free situation. Given they drive for Gene Haas and the Haas F1 Team. The same Haas from the Stewart-Haas Racing NASCAR team.

PREV POST
Two NASCAR Tire Compounds in use at Charlotte – Get Ready for Excitement!