Josh Richards was the 2016 World of Outlaws Late Model Series champion. He picked up the title while driving the Rocket Chassis house car for his father, Mark Richards. A car that’s primarily fielded in the World of Outlaws tour. At the start of the 2017 season, the champion switch teams.

Brandon Sheppard used to be the driver of the #B5 for Best Performance Motorsports, a Lucas Oil Team. In 2017, Josh Richards became the new driver for BPM. Switching numbers from #B5 to #1, Josh filled the seat formerly held by Brandon Sheppard.

I had theories as to why they/he decided to make this switch. However, I didn’t think I had the full answer, only assumptions. I wanted to hear it from the driver himself. To date, we’d only heard an announcement, via a Rocket Chassis press release.

Speaking on tires, “The biggest difference I’d say, would be the tire rule. Getting acclimated to that, it’s changed the racing quite a bit.”

I asked if that was a rule change for better or worse? He replied, “It’s different. It’s easier. You know, I don’t think the racing’s as great. I guess it’s easier for the teams. So, I guess it just depends.”

So who’s decision was it? Josh declares, “Just a team decision, really.” 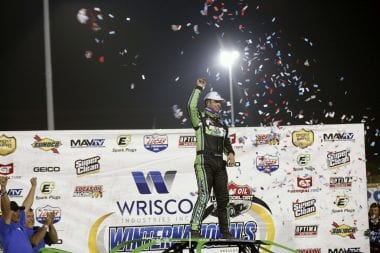 Are you enjoying it? Richards states, “Yeah. Like I said, it’s all the same to me. It takes the same to win, both sides. There’s a lot of great talent, on both sides.”

Josh Richards won the World of Outlaws championship in 2016. In the world of national dirt late model tours, the talent is split. A champion in most racing series is a stamp of “best driver” from that given season. In this world, the best drivers are divided. Half run with the LOLMDS the other half runs with the WoOLMS.

To me, I assumed Josh Richards just decided to switch to the Lucas Oil Late Model Dirt Series for the second half of the “best driver” challenge, to beat the other half of the national dirt tour. Speaking to others in the pit lane, most of us came to the same assumption.

Specifically, that means battling against Scott Bloomquist, who won the Lucas Oil Late Model Dirt Series championship in 2016. So, I asked the new Best performance Motorsports driver about that directly. Josh said that’s not the case at all. He replied simply, “No it has nothing to do with that.”

Josh Richards loves to race, no matter the series. He explained, “It makes no difference to me. I really just love to race and put on a good show. It doesn’t matter if it’s an Outlaw race, a Lucas race, if it’s $100,000 to win or $1,000 to win. It’s all the same. Really, at the end of the day you just wanna go out there and have fun and do the best you can.”

Josh Richards is currently 3rd in Lucas Oil Late Model Dirt Series points. He was the point leader early in the season. He currently sits 180 points behind leader, Scott Bloomquist.

To date, Josh Richards has collected 3 Lucas Oil Late Model Dirt Series wins in 2017. Though, he’s been a bit more dominant than the win column would lead you to believe. Most recently, he was leading at LaSalle Speedway. He spun late in the event, from the lead. Beyond that, he also has an outrageous amount of top-five finishes.

Chris Ferguson talks about the switch to Sweet Bloomquist Chassis