Tonight, the Lucas Oil Late Model Dirt Series landed in Greenwood, Nebraska. Built in 1994, I-80 Speedway is a 4/10th mile dirt track. This is the inaugural Go 50 Lucas Oil Dirt Series event at the speedway.

View full I 80 Speedway results below.

Rain clouds have rolled in, multiple times. We’ve received a warning over the PA that if the track gets one more shower, they’ll have to call the race. However, with dark clouds overhead they continue to work the track.

Hot laps begin, the rain moves in once again. It’s a light shower. Still green, tear offs are used as windshield wipers. This is the last rain cloud it’s nearly passed us, when it clears we will be good to go for the rest of the night. 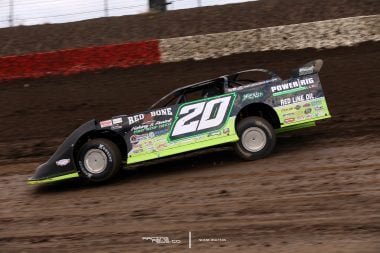 Tim McCreadie set fast time in group A, turning a lap at 16.477 seconds. Jimmy Owens topped that in group B qualifying. Owens ran I-80 Speedway, a hundredth quicker at 16.464 seconds.

Tim McCreadie is the early leader in heat 1. However, he hit a rut, drifted way up the track. Darrell Lanigan slipped passed. It looks like McCreadie has damage as the right front is rolled under the car. Darrell Lanigan drives away claiming heat #1.

Hudson O’Neal started on pole in heat #2. However, a different O’Neal took the win. Jake O’Neil was the winner of heat #2.

Pole sitter Jimmy Owens jumped out to the early lead in heat #3. However, Bloomquist remains close. He drives under Owens at the exit of turn 4. Bloomquist drives off to the heat win.

Mason Zeigler drove under Steve Francis in the final heat. He drove off to the win.

Josh Richards finished 7th in his heat race. In B-Main #2, he drove from the back, to 2nd. Getting into the main event, without the use of a provisional.

Darrell Lanigan and Scott Bloomquist make up the front row for the main event. 50 laps, in the first Go 50 event.

Green flag. Darrell Lanigan is the early leader. Scott Bloomquist trails in 2nd. Mason Zeigler drives around the outside of Hudson O’Neal. Zeiger sets sights on the top 2. 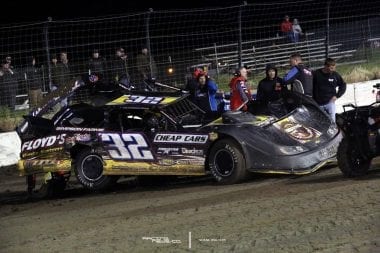 Big crash! Chris Simpson and Hundson O’Neal are involved. They were both running inside the top 5. Chris Simpson was jacked into the air, his dirt late model reached the height level of the fence. He flipped down the middle of the back straight.

Hudson O’Neal was riding under Simpson. A dirt clot reached the cockpit. Hudson O’Neal was knocked out by the impact of the huge dirt clot. Scary accident. They try to put him on the stretcher, Hudson suggests otherwise and walks to the ambulance under his own power, with a limp.

Green. Lanigan still leads. Bloomquist and Owens fill out row two. Bloomquist looks low on Lanigan. It doesn’t work. It backfires. Mike Marlar has been hard charging to the front. He now all over Team Zero for 2nd as Lanigan is offered some breathing room.

Trouble for Lanigan. Bloomquist is passed, as is Mike Marlar. Marlar is now looking for the lead. He drives to the outside of Scott Bloomquist in turn 4. Marlar tags the wall! He parked it.

Bloomquist drives to the cushion, begins driving away from the field. The rest of the field is finding speed at the bottom or through the middle. However, the rain is beginning to show it taxation. Large ruts are forming in the bottom groove of turns 3-4.

Nobody hits those ruts like Tim McCreadie. He hiked up the right front of his racecar nose before this feature. He was prepared. Lanigan begins to freefall, Satterlee and Pearson Jr are both looking to take away his position.

The entire top 5 is swapping around faster than I can remember. This is great racing! The track is a little rough at the moment, I think we all expected that though. Caution. Josh Richards hits the pits. 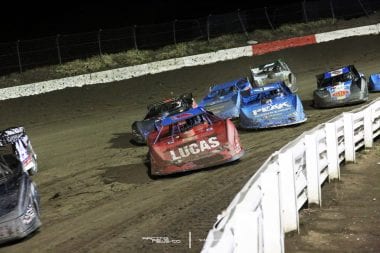 Pearson Jr is the new challenger to Scott Bloomquist. Mason Zeigler drives around him on the restart. 3 wide behind them. Risky, if the driver on the bottom his the rut just right, he’s sent uncontrollably up the racetrack. 3 wide is riskier than usual, the car running the bottom groove is unpredictable.

Meanwhile, Bloomquist is driving away with it. Mason Zeigler and Earl Pearson Jr have halted their progression. Scott Bloomquist is going to win the first Go 50 event at I-80 Speedway!

At the end of the feature, Hudson O’Neal was transported to a local hospital.

The stands were slightly light tonight. The track was surrounded by rain. Most fans skipped tonights event assuming the race would be a washout. The track earned a lot of respect from the diehard fans tonight. They could have called it, they didn’t. With a light crowd, they raced anyway.

They will rack the field again this Thursday. It’s a home race for the series as they head to Lucas Oil Speedway. It’s a big one. The Show-Me 100 will take place in Wheatland, MO on May 25-27th.