After yesterday’s rain delay, the 2017 Show-Me 100 will resume tonight. This is a spoiler-free race report of the biggest Lucas Oil Late Model Dirt Series event thus far in 2017.

What NASCAR race? The grandstands are packed at Lucas Oil Speedway. 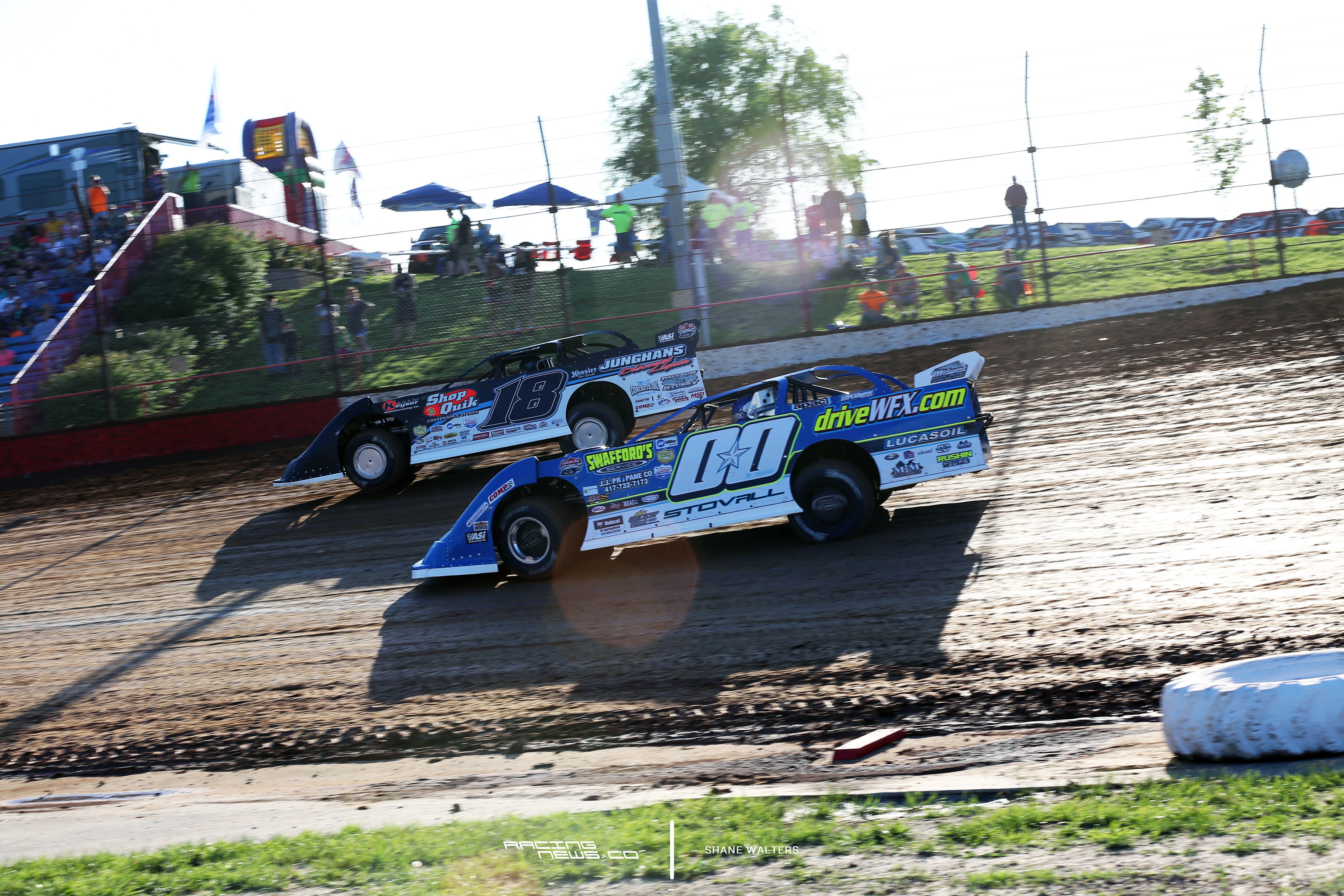 B-Main #1. Jesse Stovall starts on pole in the first B-Main. Mains, under the bright sunlight. They are only taking the top 2.

Next is the leader Jared Landers. Chase Junghans rounds him as well. Junghans stole the show in B-Main #1 driving away from the field en’ route to the win. He’ll earn his spot in tonight’s main event. Jaraed Landers will earn a spot as well. 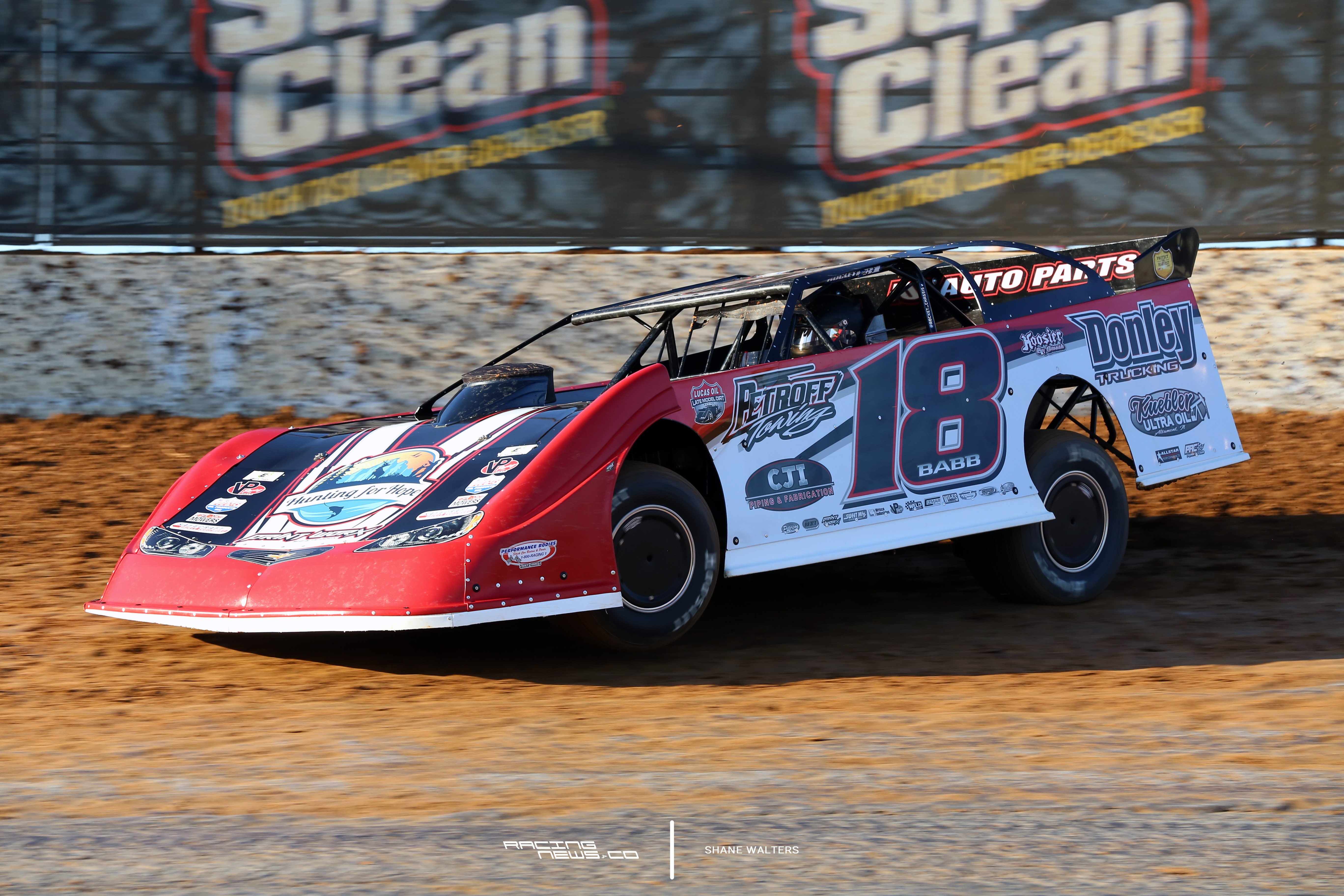 B-Main #2. Logan Martin and Shannon Babb set up the front row in B-Main number two. Shannon Babb powers on the outside to take the lead in turn 1.

Terry Phillips pulls a slide job on a lapper. The track is very dry slick already. Thus, he drifts all the way to the wall, backwards, he loops it while trying to catch the slide. Phillips was running 4th.

Joey Moriarty is running 3rd. But he’s got splitter issues. His right front is dragging the track, on the straight-away. Dirt chunks go flying when the nose sets on corner entry. Trouble for Moriarty, he’s off.

Logan Martin takes a stab at Babb in turn 3. Not enough. 3 wide behind them for 3rd as Shannon Babb takes the win and the transfer spot. 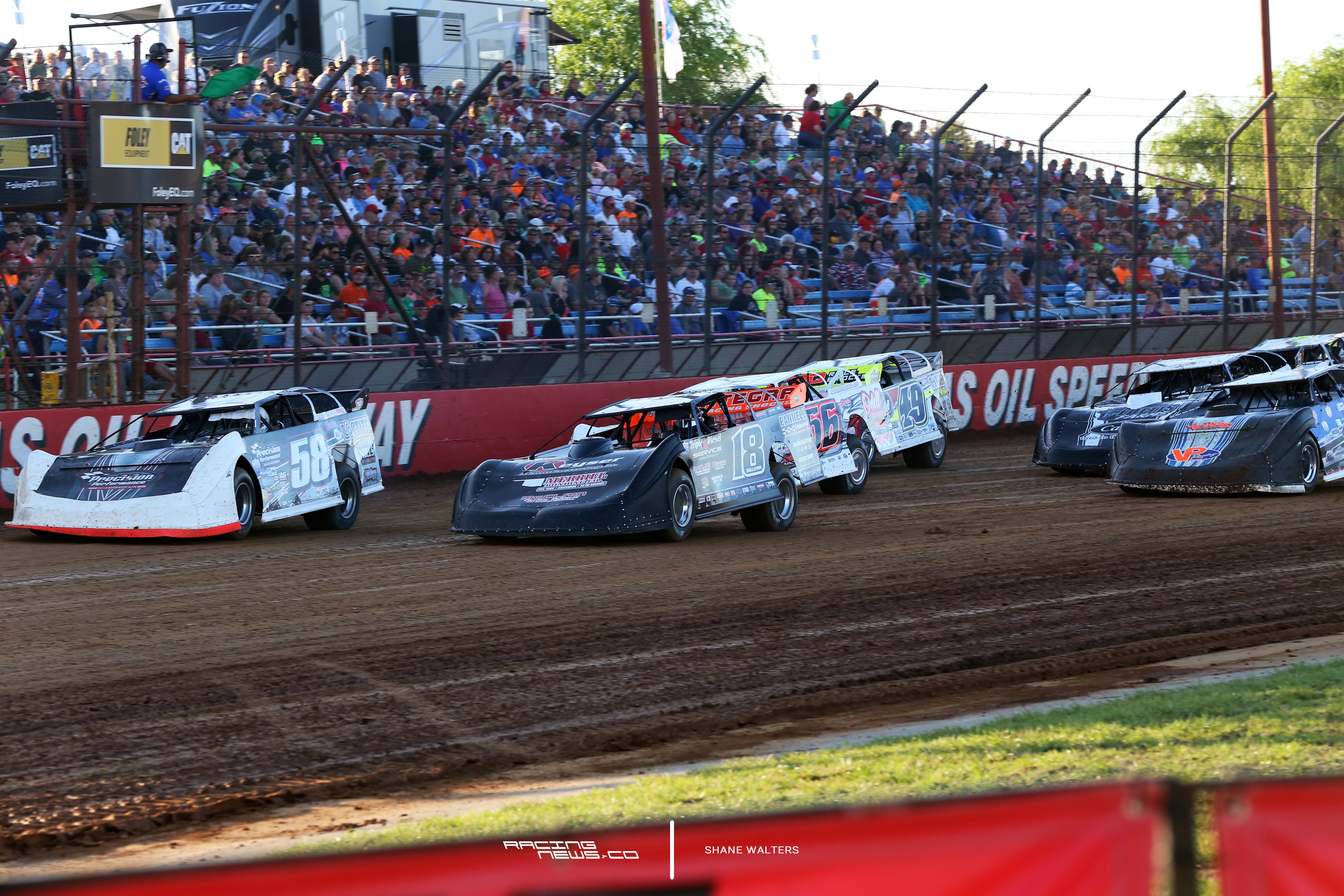 B-Main #3. Jack Sullivan and Dave Eckrich lead the field to green in B-Main #3. Sullivan is the early leader but it’s complete chaos behind him. 4 wide, rubbing fenders. They all survived.

Davenport spins a lap later. Likely a flat tire from contact the lap before. He creates a parking lot in turn 2.

Green. Tony Jackson Jr is looking low on Eckrich. He’s running high on entry swinging low on exit. He doesn’t door him. But it doesn’t work. As I said, the track is very dry. He spins all alone trying to put the bottom down through the middle on the exit.

Jake O’Neil is in the wall. He bounces off it, back into traffic. Sends another driver nearly into the infield. They all survive. O’Neil makes it back to 3rd. Final lap, he pulls a slide job. It’s not aggressive enough to take them both out but not enough to make the pass either.

Midwest Sheet Metal Challenge, AKA last chance qualifier is up next. It’s a full field of cars, they’re taking just one. 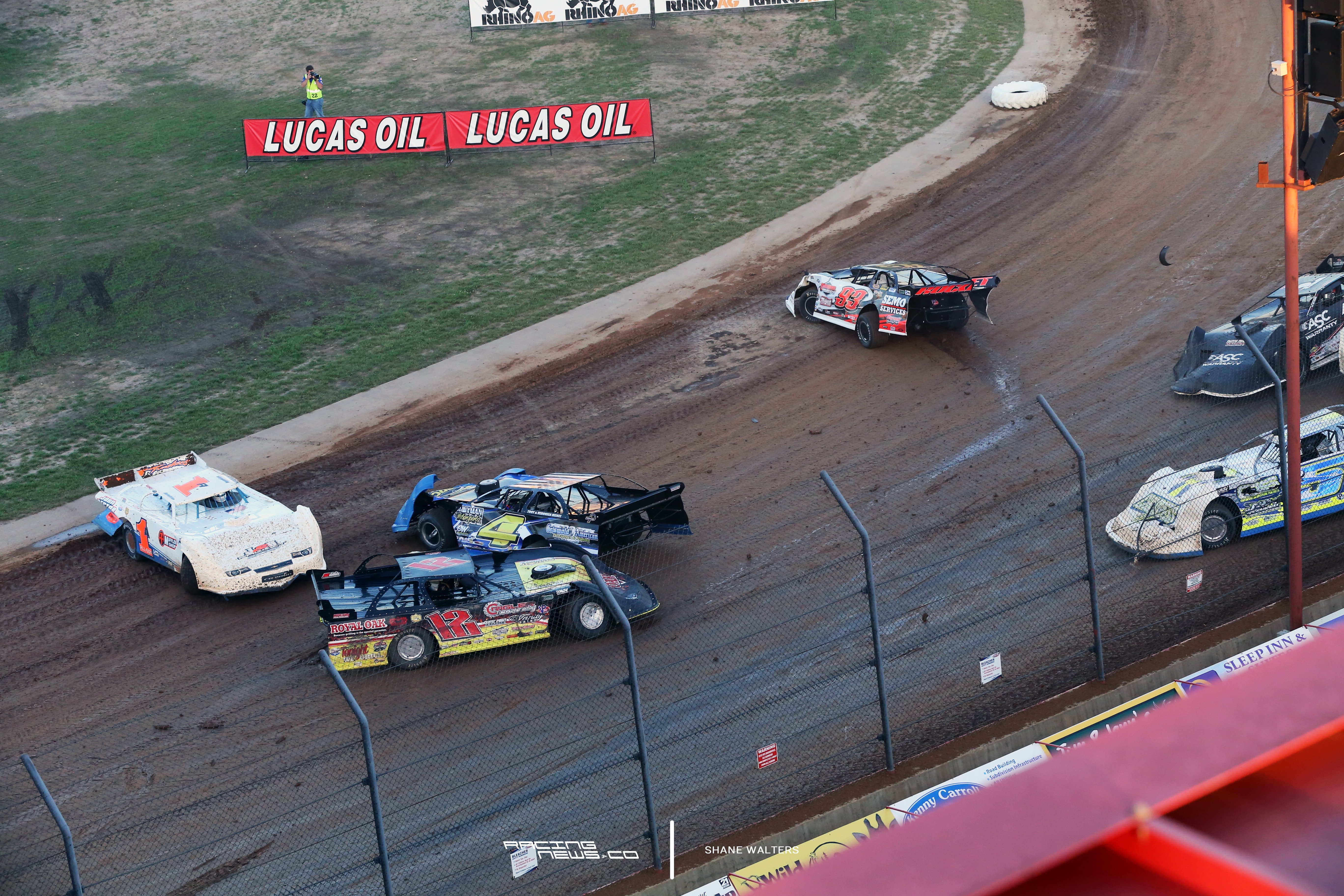 Cole Wells and Jake O’Neil lead the field to green. O’Neil is the early leader. Big crash, 7 cars are smashed on the front straight. The track was blocked, leaving trailing cars no path of avoidance. Nearly half the field is heading to the pits. 2 laps complete.

Green. 4 wide at the start finish line. They run out of room in turn 1. Caution. 2 laps complete.

Green. Jake O’Neil is gone. Tim Manville and Timothy Culp battle for 2nd. Caution. Terry Phillips is around, he’s off to the pits. 9 laps down.

17 down, Culp is chasing down O’Neil. He pulls a slide job in 4. New leader! O’Neil cuts back under Culp, sliding under his rear bumper. O’Neil is back even at the straight away. Pass 1/2 complete. Turn 4, O’Neil drives it in deep. Culp either makes a mistake or he anticipates being slammed into. Either way, Culp goes up the track. He’s over the cushion and he’s lost the lead. Jake O’Neil from Arizona is heading to the tail of the main.

A-Main up next. The track is being re-worked. Tim McCreadie and Jimmy Owens will lead the Show Me 100 field to the line. A $30,000 check awaits the winner.

Green Flag! Tim McCreadie leads as Jimmy Owens falls back to 3rd. Earl Pearson Jr is on the charge. He looks for the lead on McCreadie, new leader.

Earl Pearson Jr pulls 10 car lengths to McCreadie. The field has mostly migrated to the bottom. Caution, Payton Looney has parked, something broke. 11 laps down. 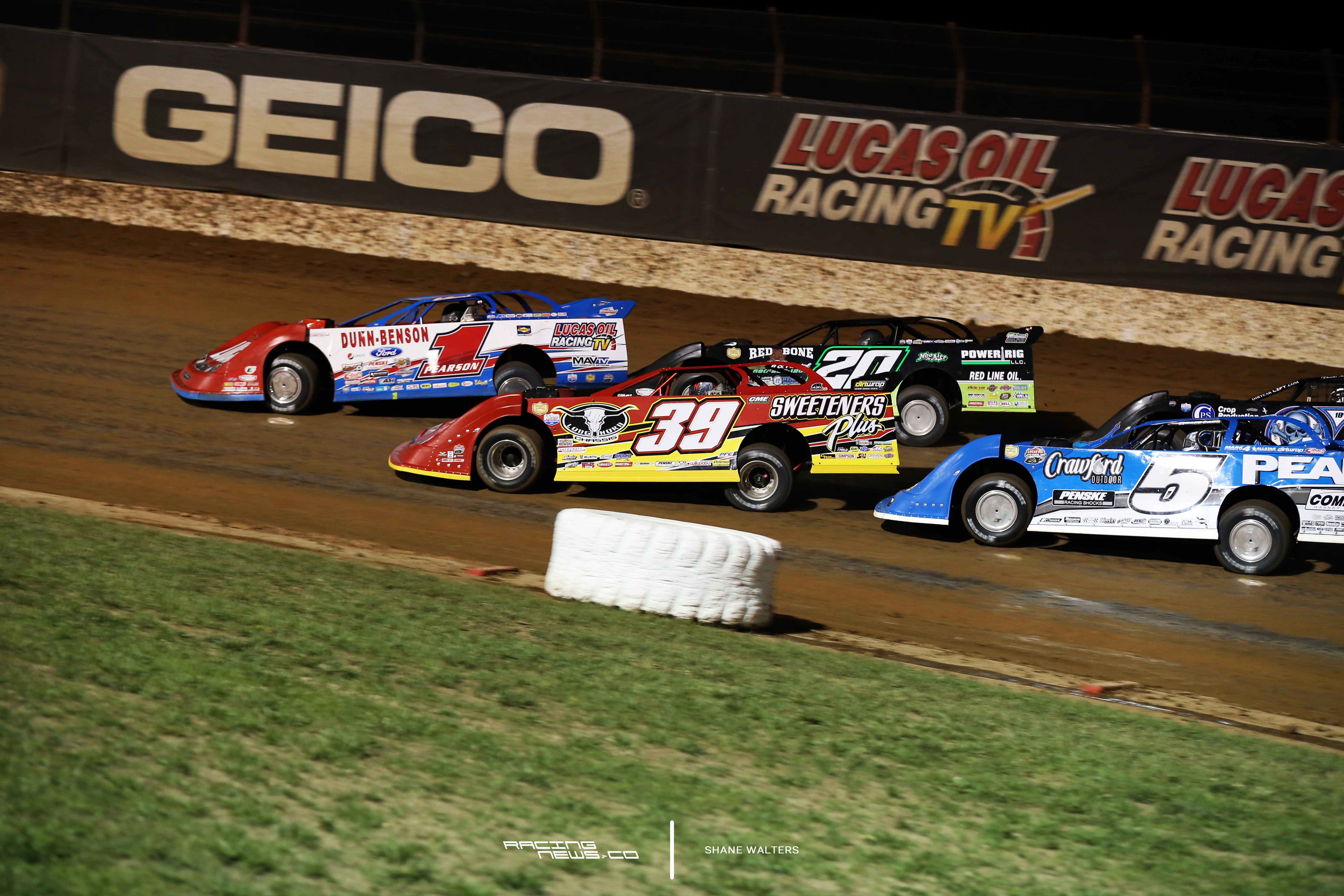 Owens is coming back to the front. He’s looking for a hole around McCreadie. Bloomquist also looks to have some speed. Pearson Jr is in his own league so far. Caution. Chris Simpson has stopped on track. He hits the pits and returns. 22 laps down.

Green. Caution. Darrell Lanigan has broken on the restart. The field was 4-5 wide as they went around him at the flag stand.

Lap 25, Owens has moved passed McCreadie. Chasing down Earl Pearson Jr. Owens looks low, he’s there. He can’t make it stick. Owens gets out of the gas loses a ton a ground to Pearson. Caution. Mason Zeigler has gotten into Mike Marlar, the #157 is around.

Jonathan Davenport is up to 11th. He started dead last. Mason Zeigler and Mike Marlar have both pulled off.

Owens has found speed through the bumps in turn 1. Ruts have begun to form on the high side. Pearson and McCreadie are still on the bottom or middle. Bloomquist and Owens run it right through the bumps. Caution. Hudson O’Neal has come to a stop. Lap 41.

Caution. Billy Moyer Jr has come to a stop. Lap 47. 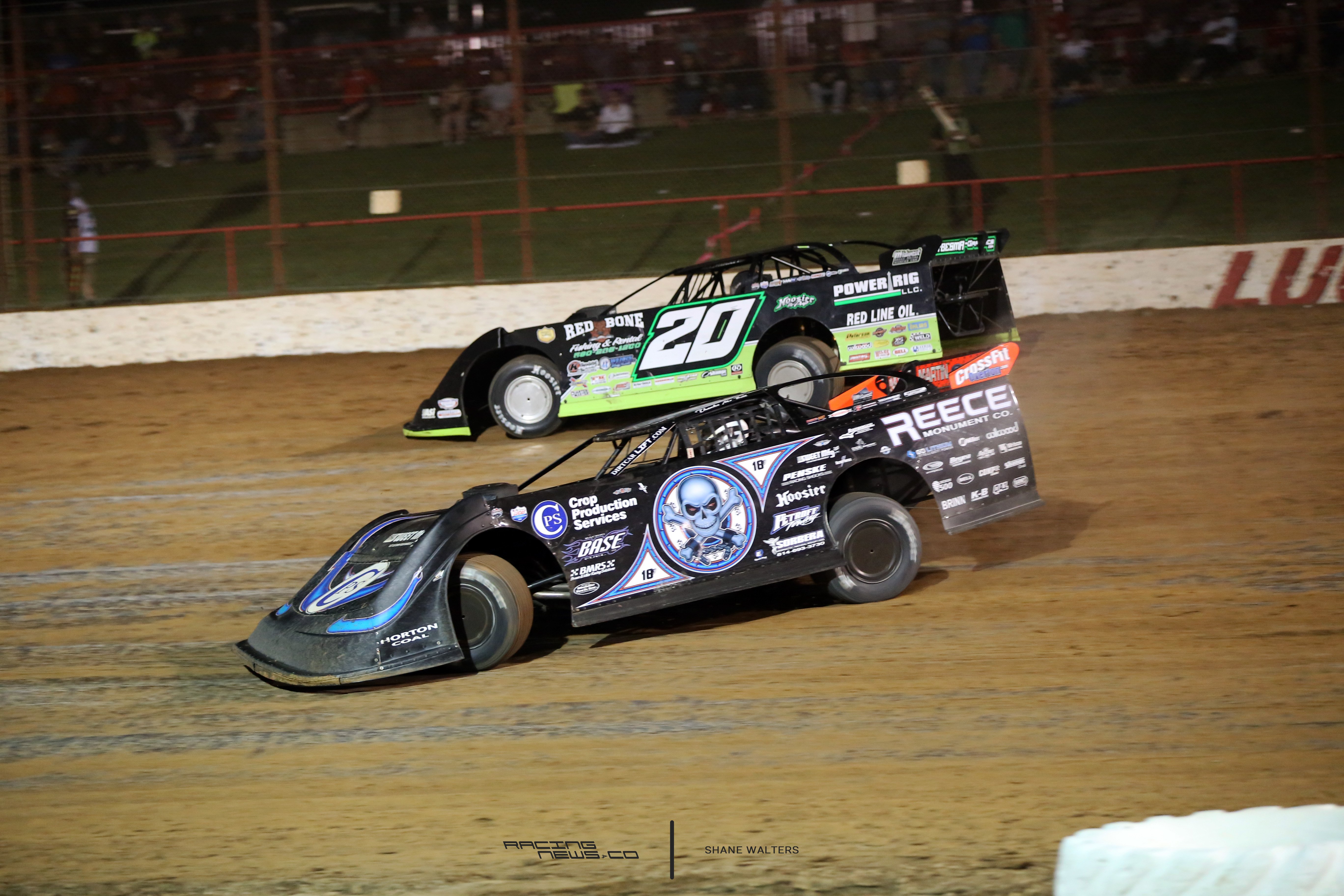 Owens jumps the cushion in the middle of turn 2. He loses a ton of positions. However, Randy Sanders has blown up. Smoke pours from the back of his dirt late model. Caution. Reverting to the previous lap, Owens will get those spots back. Lap 56.

Owens hits the wrong bump. Bloomquist is passed on the bottom as is Pierce. Pierce has climbed to third after starting 14th. Bloomquist rubs 4th while Jonathan Davenport is up to 6th. Caution. Billy Moyer Sr has stopped on track. Lap 75.

Owens is up the cushion again. This time it’s in 3-4 and he’s lost 10 positions. Pierce is on the move.

Bobby Pierce is running a lane all to his own. He’s entering turns 1-2 higher than anyone. Only his left side tires are into the bumps. The lane he’s in hasn’t been touched all weekend. The groove at the very top of the racetrack as a significant decrease in banking compared to the middle. 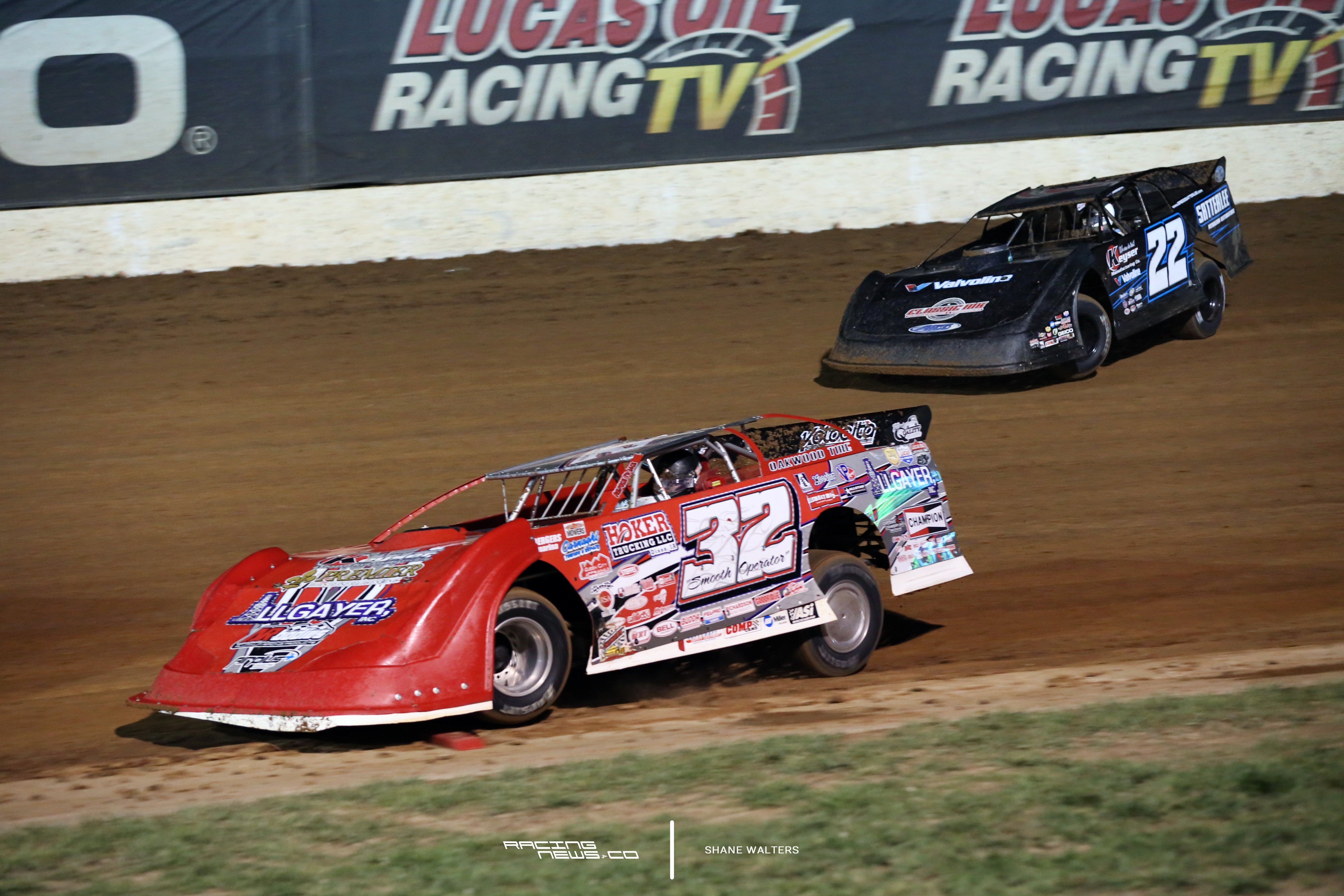 Bobby Pierce is going to win the 2017 Show-Me 100 after 100 laps around Lucas Oil Speedway in Wheatland, MO.

View full Lucas Oil Speedway results from the Show Me 100 feature night below.

Bobby Pierce speaks from victory lane, “Last year we started 29th and got up to the front and had the lead under caution when we suffered a flat tire. So yes, this feels like redemption from last year’s disappointment. We started 14th tonight, but it was a lot harder, once you get up there with those guys it got a little tougher.” 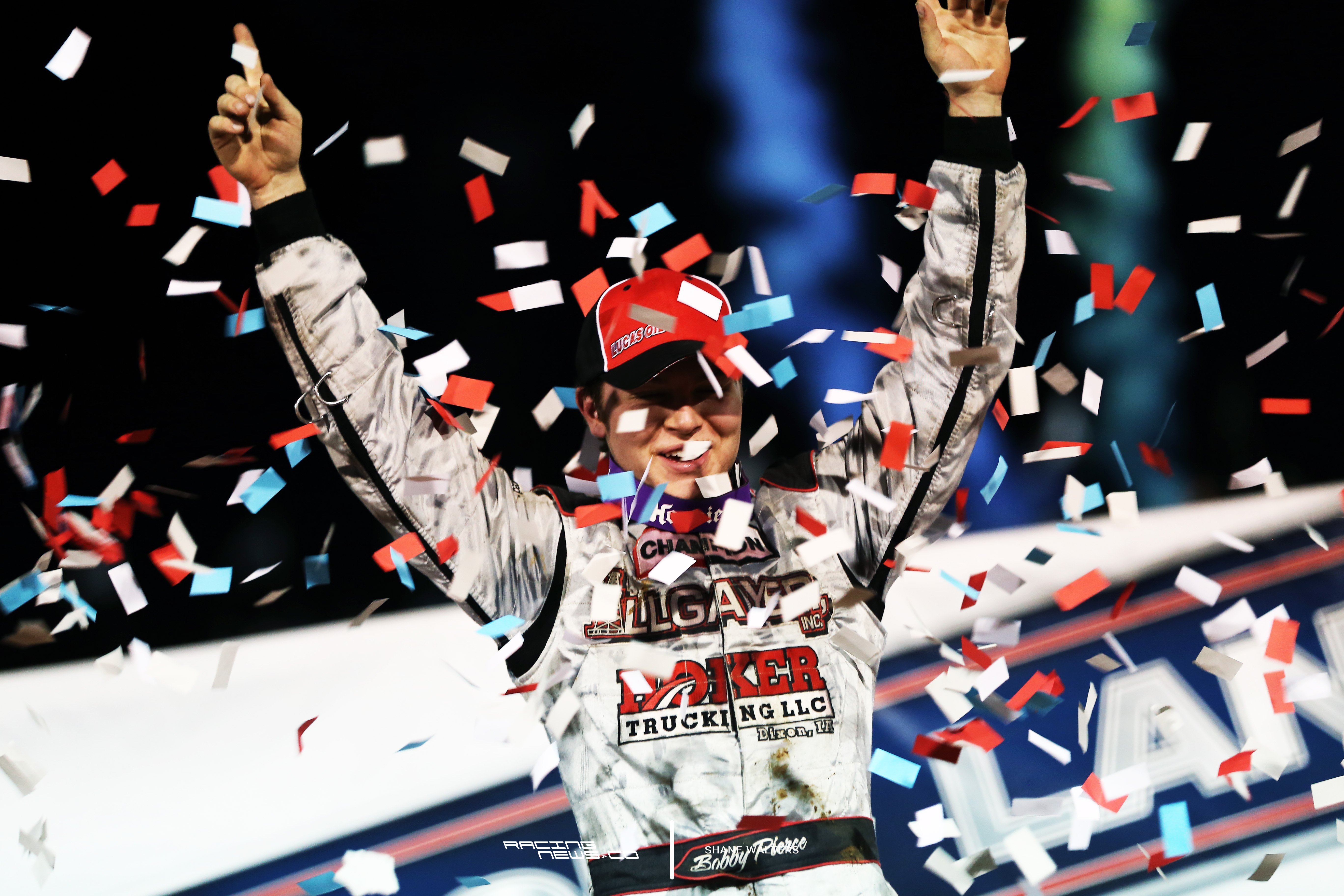 “The track would make the car bounce like a basketball. I know they were trying to make it a good track, and it did make for some good racing, so hats off to the track crew. I know they were wanting a good show for television. It was a heck of a race. Congrats to Earl on second and T-Mac for third. I am sorry I got into him [McCreadie] there at one point.”

The Lucas Oil Late Model Dirt Series will have a short break in the coming weeks. June 15-17th, the dirt late model tour heads to Magnolia Motor Speedway. It’s the ‘Clash at the Mag’ in Columbus, MS.