This weekend, NASCAR heads to Dover, Delaware. Tonight, the NASCAR Truck Series kicks off the weekend at Dover International Speedway. Kyle Busch is absent from the field, it’s anyone’s race to win.

200 laps of NASCAR Truck Series racing around the high-banked 1-mile race track. Stage 1 is 45 laps, Stage 2 is also 45 laps. The final stage of the Bar Harbor 200 will tick off the remaining 110 laps.

Green Flag. Chase Briscoe gets a jump on the restart. However, it might have been too good, he backs off to avoid a penalty. Truex gets the lead into turn 1.

Ryan Truex has a best career finish of 2nd, which came at Daytona. Early in the going, he rolls the bottom, clearing the field by nearly a full second.

Lap 20, Parker Kliggerman creates a new groove. He rolls all the way to the wall at the center of the corner. He comes off turn 2 with a bunch of momentum. Kliggermann, the NASCAR commentactor rolls around two cars at once, he’s inside the top five.

Caution. Big crash on the back-straight. Wendell Chavous lost it on corner exit. He was sliding down the track, on rotation the sliding truck goes the other direction. Sliding up the track, spotters are thrown for a loop. He collects several trucks; Stewart Friesen, Austin Hill, Joey Coughlin are all involved.

Green, 15 to go in Stage 1. Ryan Truex gets another great restart from the bottom. Noah Gragson is sideways. Three-wide, he crashed, he just didn’t hit anything. He drifts up the track into Ross Chastain, saves it. Everyone continues rolling, still green.

Caution, 10 to go. Christopher Bell has crashed. He entered this race 2nd in points. He caught a bit of the bottleneck effect from Noah Gragson. It’s possible he ran over something on the track. Flat tire on corner entry, he loops it and collects the outside wall at a high rate of speed. It’s likely to be a tough points night.

Green, 50 to go. Briscoe gets a much better start. It’s still not enough. Jesse Little gives Truex a bump at the line. 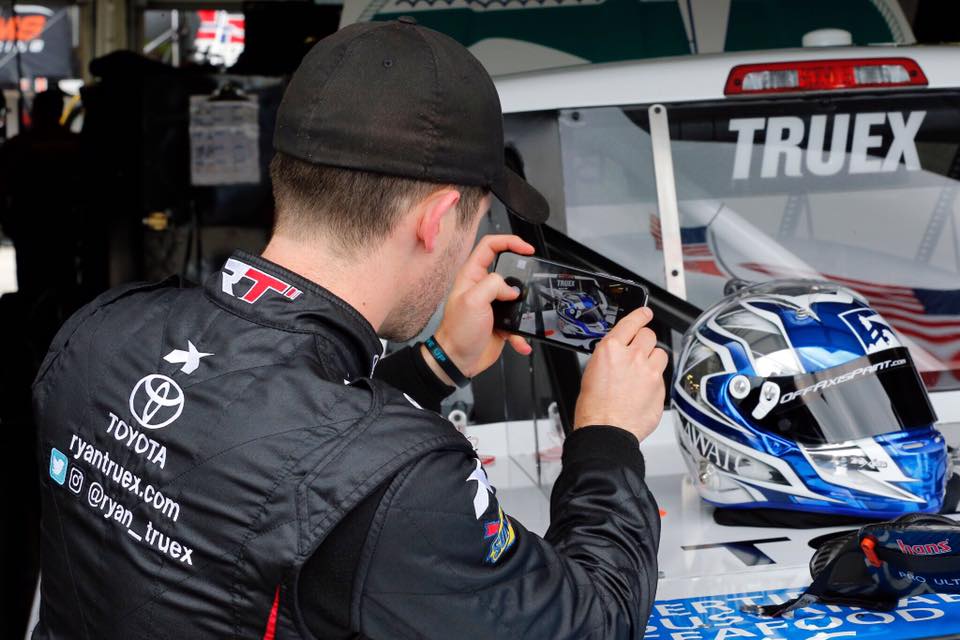 Green flag on stage 2, the front of the field looks a bit different. Pit strategy shakes up the lineup. Matt Crafton leads the field to green, JJ Haley 2nd. Crafton gets a good jump, Haley hangs with him in turn 1-2, they are even at the exit. Crafton carries the high-side momentum, clears Haley.

30 to go in stage 2. Ryan Truex runs 9th, Chase Briscoe runs 15th. Twelve cars stayed out on the racetrack in the last caution.

20 to go, Matt Crafton leads by 6 seconds over JJ Haley.

Caution. JJ Haley spins! He gets loose at the exit of turn 4. Clipping the apron just a hair, the 2nd place run goes around and tags the inside wall. Slight front-end damage.

Ryan Truex is up to 5th. Matt Crafton continues to stay out. Todd Gilliland, in his very first NASCAR Truck Series start will get his first attempt at a front row start.

Green. 12 to go, Gilliland spins his tires. He holds on to 2nd but the leader has checked out. Matt Crafton picks up where he left off.

Green-white-checkered, Crafton gets a huge push from Ryan Truex. Truex then dives to the bottom. Cutting off Gilliland, he’s up to 2nd.

Caution. Big crash. John-Hunter Nemechek gets loose on the exit of turn 4. Sliding down the track, he collects Parker Kliggerman, who nearly avoided being clipped. That sends them both back up the race track into oncoming traffic. T.J. Bell and more are involved. Parker will likely continue, he has damage but it’s not terminal. Stage 2 is complete. 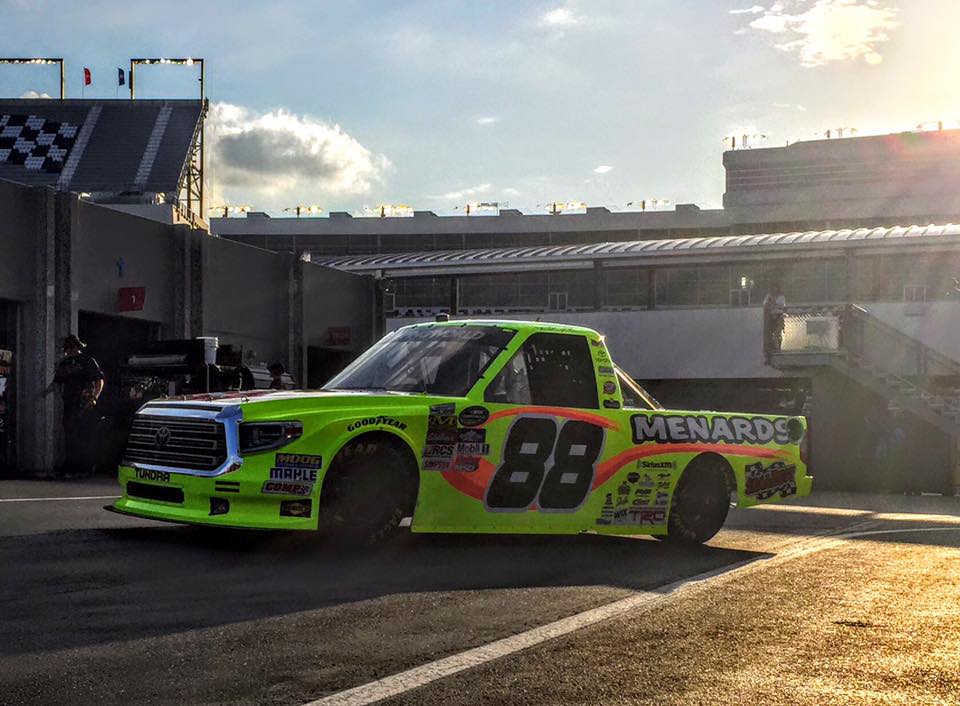 Green flag on the third and final stage. 10 laps were clicked off during caution. 100 laps remain.

Ben Rhodes and Jesse Little who both stayed out, lead the field into turn 1. Ben Rhodes holds off the field. Little holds off an outside charge from Chase Briscoe.

80 to go, trouble for Todd Gilliland. He’s on pit road with the hood up, broken suspension. Yellow flag, debris on the track. On pit road he states, “It kinda sticks to finish like this.”

Green. Jesse Little spins the tires and stacks up the field. They are 3-wide behind him. Ben Rhodes is up the road by .5 seconds in one lap. JJ Haley has rebounded, he runs 12th, fighting on the bottom for 11th.

65 to go, Haley is now moving in the opposite direction. He runs 14th.

46 to go, Jesse Little is on pit road. He pits from 2nd. He stalls it leaving his pit stall! The crew has to give him a push start. Green flag pit stops, that’s going to cost a bunch of track positions. Ben Rhodes continues to lead.

35 to go, Ben Rhodes is on pit road. He forfeits the lead for new tires. Chase Briscoe momentarily inherits the lead. Chase is heading to the pits. Big trouble! Chase Briscoe has lost a tire, on track! The crew must have missed a few lug nuts. Correction, they missed all 5 lug nuts.

Johnny Sauter is the new leader. Only 7 trucks are on the lead lap. That caution wasn’t favorable for most of the field. Ben Rhodes gets the free pass, he’s back on the lead lap. Green, Johnny Sauter clears Kaz Grala. Sauter has never led a lap at Dover International Speedway. Tonight, he leads as they head into the closing laps.

15 to go, moments ago Kaz Grala was in the wall. Now he has fresher tires and he’s all over the back bumper of Johnny Sauter.

10 to go, Sauter picks up the pace. Grant Enfinger is is also coming to the front of the pack, he currently runs in the 3rd position .

5 to go, Kaz Grala is making another charge at the lead. Perhaps he was saving his tires for a final charge.

Kaz Grala is going to come up just short. Johnny Sauter wins at Dover International Speedway! It’s his first at the concrete oval.

Sauter is coming of three runner-up finishes in a row in the NASCAR Camping World Truck Series. He finally picks up the win, catapulting him to the points lead.

Johnny Sauter speaks from victory lane, “There’s some days where you wake up and you don’t feel like it’s going to be your day. Things just don’t seem to be clickin’. I felt like we were just off a little bit all weekend. I’m so proud of everyone at GMS Racing. What a great call that was to try and make it on fuel.”