JAMAICA, VA – Despite dropping a cylinder on lap 23, Scott Bloomquist of Mooresburg, TN swept the 41st Annual USA 100 for the ULTIMATE Super Late Model Series at Virginia Motor Speedway on Saturday night. Bloomquist was the Fast Qualifier, won his eight-lap Heat Race, and then led all 60 laps to claim the $20,000 top prize driving the Reece Monuments Bloomquist.

The win now lists Bloomquist as the only four-time winner of the USA 100, and he seemed really impressed that is was his first career win with the ULTIMATE Super Late Model Series, after racing many times with the Regional series.

“I think we might have burned up a spark plug wire when we lost the cylinder, but the car was still fast, and those seven cylinders left gave all of the traction I needed,” Bloomquist said. “I didn’t realize I had never won a race with the ULTIMATE Series until tonight, so that’s something impressive.”

Earl Pearson Jr. of Jacksonville, FL and Dale McDowell of Chickamauga, GA battled side-by-side on the last lap of the race for the second spot, and they made contact on the backstretch. That put McDowell into the steel guardrail. Pearson finished second in the Dunn-Benson Ford/Lucas Oil Longhorn and apologized to MacDaddy after the race. McDowell was third in the TEXTRON Sweet/Bloomquist.

You can also call the Autolite/Fram/DirtOnDirt.com Rookie of the Year point leader Tyler Millwood of Cartersville, GA the new ULTIMATE SE Region point leader after a fourth-place finish, and Kenny Moreland of Waldorf, MD was the Hard Charger of the Race after starting 22nd and finishing fifth.

Bloomquist toured the Taj Mahal of American Dirt Tracks during M&W Transport “Haulin’ It” Qualifying in 16.671 seconds to earn an extra $400 for the Fast Time Award. Also winning eight-lap preliminary Heat Races were Pearson and McDowell.

Bloomquist took the lead at the drop of the green flag to start the race, but Ross Bailes of Clover, SC spun in turn four to bring out the first of four caution flags. That necessitated a complete restart, and Bloomquist again took the lead followed by Pearson, McDowell, Ferguson and Greg Satterlee of Rochester Hill, VA.

Ferguson passed McDowell for the third spot on lap two, while Bloomquist began to pull away from Pearson, but that was void when the caution flag came out on lap seven when Austin Hubbard of Seaford, DE stalled in turn four to light up the yellow caution bulb. Bloomquist led Pearson, Ferguson, McDowell, Satterlee, Jonathan Davenport of Blairsville, GA, Bailes, Millwood, Justin Williams of Concord, VA, Hollidge for the double-file restart.

Satterlee got by McDowell for the fourth spot on the restart, as the field raced under green flag conditions for one lap before Jackie Boggs of Grayson, KY spun in turn four on lap eight to bring out the third caution flag. After the restart, McDowell reclaimed the fourth spot by passing Satterlee on lap ten.

Satterlee would race for six more laps before falling off the pace and parking his race car in the infield pit area. Davenport lost a driveshaft from under his Barry Wright house car on lap 18 to bring out the final caution flag of the race. When the field went back to green flag action, Bloomquist opened up a half straightaway lead on Pearson, who had raced his way back up to second.

Coming by the front straightaway grandstands on lap 23, the note of the engine under the hood of Bloomquist’s race car went off song, but not only was he able to maintain his lead over Pearson, he opened it up even more! Not even lapped traffic would slow Bloomquist down.

At the halfway point, Bloomquist led Pearson, McDowell, Millwood, Ferguson, Moreland, Erwin, Hollidge, Bailes and Dohm. In the last ten laps of the race, Bloomquist opened up a big lead over Pearson, who was beginning to feel the heat from McDowell.

The second and third-place drivers battled side-by-side for the last to laps of the race, while Bloomquist took a 4.207 second margin of victory under the checkered flag. 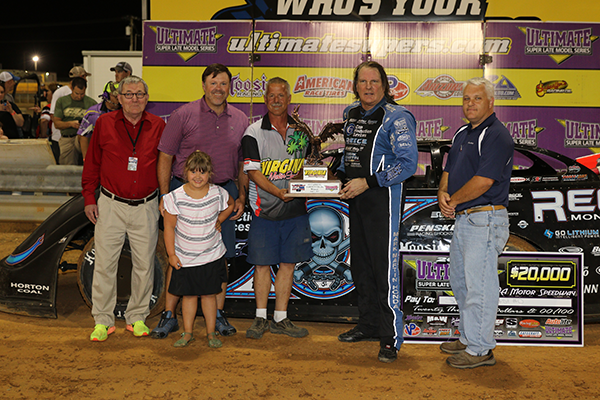