The FDNY Foundation is the FDNY’s non-profit partner that raises funds to support fire and life safety education and the professional development and training of members of the FDNY. Funding goes toward programs that look to advance the FDNY’s goals of maintaining operational excellence, community outreach and increasing diversity. 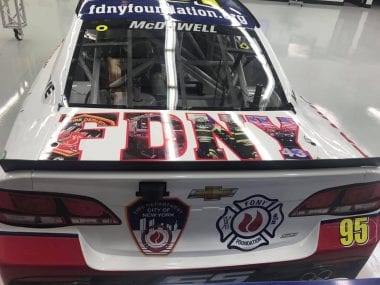 Although this is the first time the FDNY Foundation will appear on a Monster Energy NASCAR Cup Series (MENCS) car, the organization has worked closely with NASCAR previously.

“We are so grateful for another opportunity to work with NASCAR,” said Chairman of the FDNY Foundation Board of Directors, Stephen Ruzow. “NASCAR donated a Chauffeur Driving Training Simulator to the FDNY Foundation and the FDNY in 2004, allowing members of the Department to train in dangerous driving conditions without the risk of injury or damage. Now, in a show of support for the FDNY and the Foundation, and thanks to our Board Member, Matt DiLiberto, co-owner of Leavine Family Racing, we have the opportunity to increase awareness of the ways we support the critical, life-saving mission of the FDNY because they have offered to place our logo on their car as it races in the Pocono 400.”

Co-owner of LFR, Matt DiLiberto, is proud to showcase the FDNY Foundation on the team’s No. 95 Chevy, an organization he gives a great deal of time to as a board member.

“We are thrilled and humbled to have the selfless firefighters of the FDNY and the incredible work of the FDNY Foundation represented on our car in Pocono,” said DiLiberto. “The NASCAR community has a deep respect for those who give of themselves for the greater good and the men and women of the FDNY exemplify heroism. Showcasing the FDNY Foundation, which supports the FDNY in so many ways, is truly an honor for me and for all of us at LFR.” 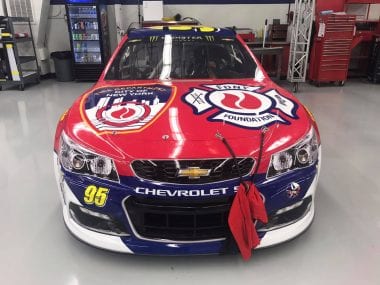 McDowell is looking forward to returning to the “Tricky Triangle” with the FDNY Foundation on board his No. 95 Chevrolet SS after earning his best finish there last year. McDowell and LFR have recorded three Top-20 finishes in a row, their best streak of finishes in the MENCS.

“I love Pocono, because it’s a lot like a road race,” said McDowell. “There are three corners that are completely different. I like the fact that you actually have to downshift. That helps me with rhythm and getting the car to feel good. I feel like we have a bit of an edge here more so than other places just because of the rhythm you get into shifting.

Last year we had a pretty strong showing there and had good speed. The good thing about Pocono is there is a lot of strategy, and also the track is so long that you’re not really fighting to stay on the lead lap, so you can be pretty aggressive with your strategy. That makes for a lot of fun during the race and some crazy restarts.”

The Axalta presents the Pocono 400 will take place on Sunday, June 11 at 3PM ET. Fans can tune-in to FS1 for live race coverage and follow @LFR95 on Twitter for weekend updates.