Tonight, the NASCAR Camping World Truck Series hits the newly configured Texas Motor Speedway. Unlike, the MENCS weekend, this weekend the upper groove are very green. Tire draggers were only slightly used for the trucks.

Green Flag. The field is side-by-side all the way through 1 and 2. By turn 3, they entire top 20 filed into a single groove, around the bottom.

Caution. Austin Cendric is in the wall. He got loose on the bottom lane. He chased it up a 1/2 lane. He’s the first truck to discover, there’s absolutely no grip on the highside. He skates it all the way to the wall, heavy contact.

Green. Caution. Jordan Anderson is forced into the third line. There’s less grip, less banking up there. A dangerous combination, he truck is turned around, on his own.

Green. Noah Gregson leads. It takes a few laps but Johnny Sauter reels him in. Sauter looks to the inside in 3-4, he gets loose. He backs out of it but not enough to forfeit the fight. Sauter to the lead in turns 1-2. Gregson is going backwards. Christopher Bell and Matt Crafton are both around Gregson.

Christopher Bell is coming to the front. Bell is taking a much narrower entry into the corner. He then bounces it off the apron, all the way through the corner.  In the aero sensitive age of truck series racing, he’s likely doing that to keep downforce on the nose.

Johnny Sauter is going to hold off Bell and pick up the win in Stage 1.

Green flag on stage 2. Johnny Sauter returns to the front row following pitstops. Chase Briscoe is hanging tough on the outside. He’s the first car I’ve seen to nearly complete the pass on the outside. For the lead no less, he leads at the flagstand. However, he backs out early and falls behind Sauter at the entry of turn 1.

Chase Briscoe is falling. He’s either saving his tires or his tire pressures were set extremely low. Noah Gregson and Christopher Bell both slip passed on the bottom. Christopher Bell sets pace at Johnny Sauter.

Johnny Sauter only took two tire on the last pit stop. Christopher Bell took four. New leader. Chase Briscoe is next, he looks to the outside of Sauter. Cross-over and to the bottom, move Briscoe to 2nd.

Christopher Bell is your stage 2 winner at Texas Motor Speedway.

73 to go, Johnny Sauter is all over Christopher Bell. 4 tires vs 2 tires, Bell just needs to hold onto it until the next pitstop.

Lap 98, lappers are in the way of the leaders. Johnny Sauter gets pinched. He loses 2nd to Chase Briscoe and John Hunter follows him through as well. Sauter is back under Nemechek, he gets loose, skates up the racetrack. He collects it. Sauter resets, drives around on the outside, back up to 3rd.

Lay 104, Noah Gregson, the polesitter is on pitroad. Vibration. The problems are compounded when he gets the radio call, “Too fast entering pitroad.” He’ll have to serve a drive through, all under green flag.

50 to go, caution. Stewart Friesen is in the wall. Flat tire sent him into the wall at the exit of turn 4. This is the 2nd truck this team has lost this weekend. Pit stops. The crew of Chase Briscoe missed a lugnut on the left rear wheel. They didn’t pull him back in, they are taking risk, he restarts 3rd.

Restart, 32 to go. Christopher Bell clears Chase Briscoe. Johnny Sauter restarted 8th, he’s now looking at 4th. He thinks about making it 3 wide on the outside, he wisely backs out of it. Caution. John Hunter Nemechek pinched on exit Justin Haley. Haley got loose, with no room for error he clipped Nemechek, who was sent into the wall.

Green, 25 to go. Chase Briscoe might make it work, he’s hanging again, on the outside. He bails, falls in behind Bell, again.

Ryan Truex came to pit road during the last caution. He flying through the field. He’s already up to 3rd. Bell and Briscoe are a full second up the road. Briscoe is all over his bumper now. Bell threw a block, Briscoe parked it up his ass. Caution, Cody Coughlin has blown an engine.

Green, 9 to go. Bell and Briscoe run side-by-side. 3 wide for 3rd. Johnny Sauter gets clipped in the right rear. He was the car in the middle of that mess. He had a car to his outside, yet he still saved it. Not sure how.

Big mess behind them. Snider lost it on the bottom. Kaz Grala was the 3rd car in line with nowhere to go when he reached the parking lot.

New leader! Chase Briscoe was ahead of Christopher Bell as they crossed the last timing line previous to the yellow flag. He’s been fighting up front all night, until this point, he’s only led 1 lap.

Green-white-checkered, Chase Briscoe and Christopher Bell as side-by-side. They have swapped roles, but it’s the same game. Briscoe now on the inside. Coming to 1 to go they are even at the exit of turn 4. Briscoe gets loose, he catches it but looses a few inches to Bell.

Big crash around the top 5. Austin Wayne Self got sideways under Johnny Sauter. He nearly saved it, but he scrubbed off a ton of speed in doing so, he was 90 degrees sideways. Timothy Peters comes into the scene with nowhere to go. He slams Self.

Peters is sent into the infield grass. The splitter digs into the grass, it becomes a pole vault. Peters is up and over, barrel rolling down the front straight away. He spins on his roof, like a top and finally comes to a stop just passed the start finish line. 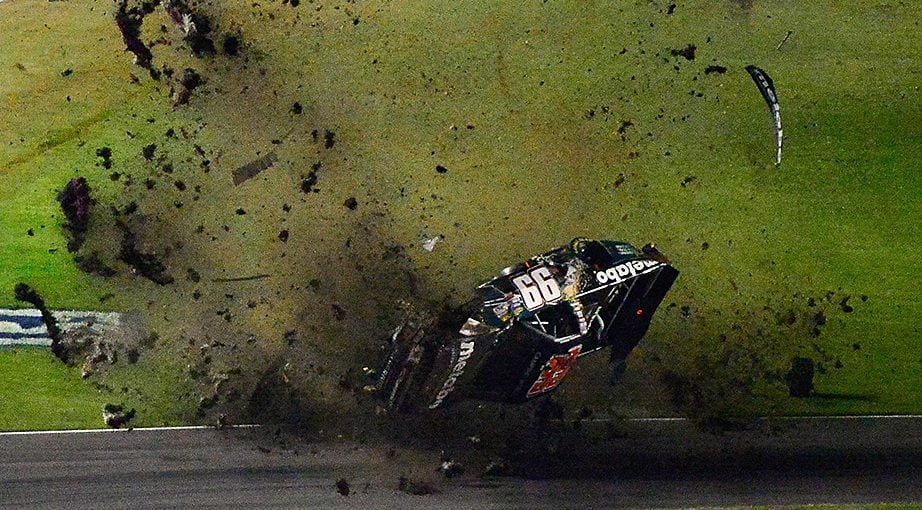 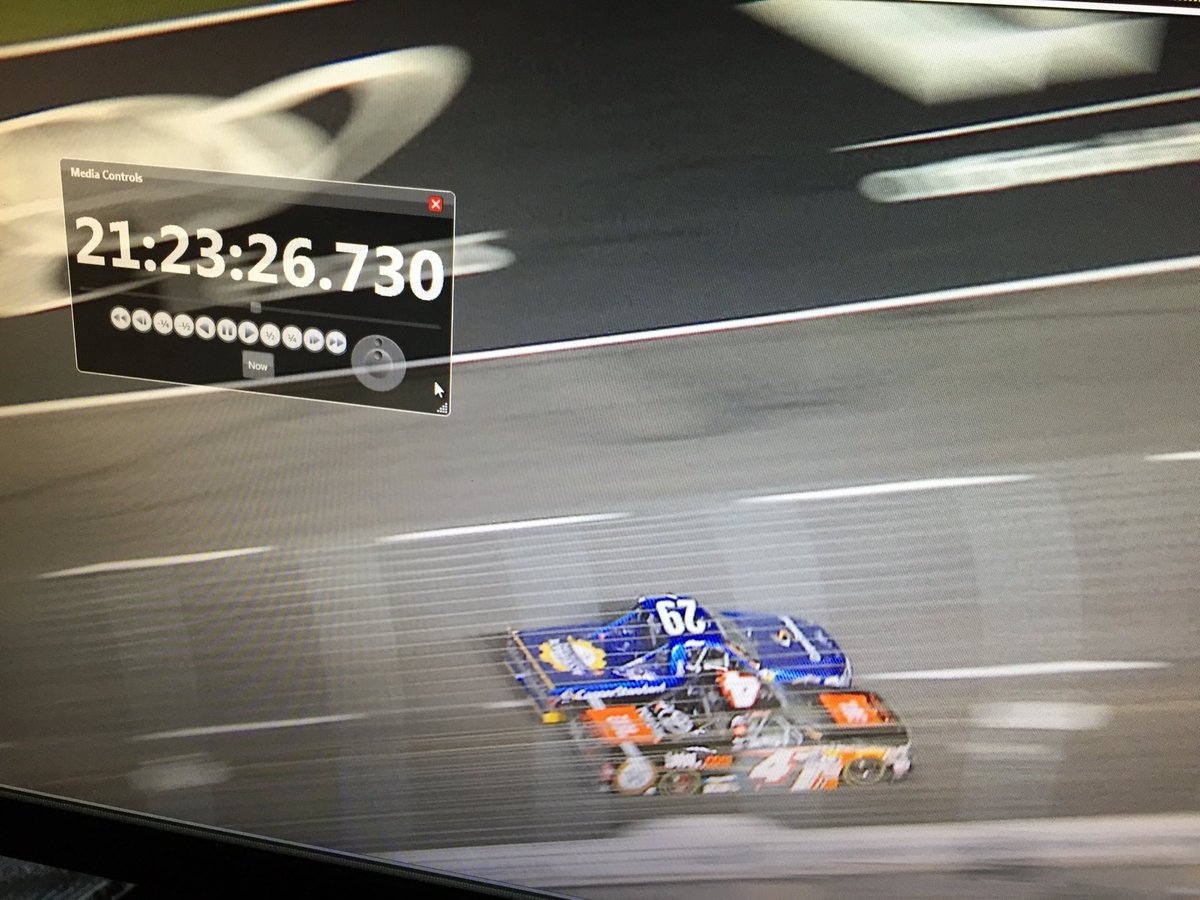 Meanwhile, this race is over. Christopher Bell took the lead as Briscoe got loose at the exit of turn 4. He was only ahead of a few inches, but that was enough to take the lead. Bell passed Briscoe, the exact same way Briscoe passed him earlier. The trucks crossed the line to take the white before the yellow came out. The field completed the final lap under caution.

Christopher Bell is the winner at Texas Motor Speedway!

The crowd stuck around to make sure Timothy Peters climbed from the truck uninjured. They rolled his truck over soon after the field crossed the line under the caution lap. He climbed out and walked to the ambulance.