If you scrolled through Instagram today, you might have stopped at Brittny Ward’s post. She’s a former Playboy playmate and the current girlfriend of former Formula One World Championship winning driver Jenson Button. Tongue twister.

The posts are a changing of the time. A welcomed change in the eyes of many.

The topless photo was posted with a brief caption. Stating, “On Wednesdays we hold our pups.”

However, other people have a very different use for social media. Promotion.

What’s Brittny’s role within the new company? The website states, “Brittny is a fashion model and a tastemaker who was raised in Northern California where her uniform was often a bikini. She was discovered at the age of 12 where she began a long and exciting modeling career appearing in several magazines, commercials and campaigns.”

How did she get into swimwear? “Her passion for swimwear came from her experiences working with many fashion photographers and brands over the years.”

The e-boutique is just that, an online boutique store. As of now, 3 variations of the same product is available for online purchase.

View more photos of the GirlsonSwim collection below.

The transparent strapped bikini titled the “Bare Strappy Bikini” is available in 3 different color. It’s billed as “A bikini that is unique with its clear vinyl straps, it will instantly make legs look longer, and the adjustable chest band will ensure your ideal fit.”

Jenson Button is a retired F1 driver. He never officially announced his retirement. The former F1 champion made a Grand Prix start as recently as two weeks ago. 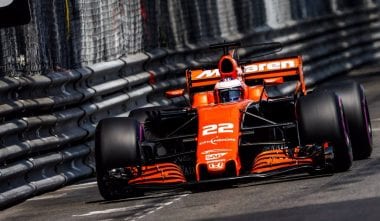 Jenson Button filed in for Fernando Alonso in the biggest F1 race of the season, the Monaco Grand Prix. He finished 18th after several strategic problems throughout the road racing event.

Related: Go behind-the-scenes of the F1 drivers meeting, for the first time in 20 years – Monaco

Fernando Alonso parted from the McLaren-Honda machine, for a single weekend. He went off to try his luck in America. He made his first Indianapolis 500 start in the Verizon Indycar Series. Fernando failed to finish due to a blown motor.

Here I am writing about it. So the promotional campaign is a mission accomplished. After-all I like minimalism in design, freedom of expression, females and F1. It’s right up my ally from many aspects.