Action kicks off tonight and will see the stars and cars of the Lucas Oil Late Model Dirt Series (LOLMDS) competitors attempting to tame the “Black Ice” in pursuit of a $20,000-to-win top prize and a total purse in excess of $90,000 plus, as the MAVTV cameras tape all of the action for a future airing. 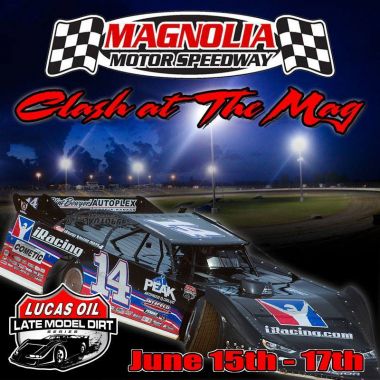 Saturday night, June 17th will see the LOLMDS Super Late Models contesting b-main action as well as the 100-lap, main event, which will be taped by the MAV TV cameras for a future broadcast.

MSSS Street Stocks will take part in a $2,000-to-win finale, while the NeSmith Dirt Late Models will battle for $1,000-to-win, with it being a weekly point’s race.

Late Model Sportsman will battle for $400-to-win, with it being a weekly point’s race.

Factory Stocks will battle for $300-to-win, with it being a weekly points race.

PREV POST
Country Pleasin’ Clash at the Mag Just One Week Away!