MALVERN, PA –Mustangs and enthusiasts from all generations mingled at Maple Grove Raceway on August 12th for the 9th annual AmericanMuscle Car Show. AM2017 was swarming with herds of modified Mustangs, die-hard participants, top-notch vendors, entertaining competitions, and even an automotive celebrity or two.

Visitors disregarded the forecasted chances of precipitation and, to their delight, the downpour held off until after the show. As always, charity was a strong focus making for an awesome and unique vehicle reveal while raising over $125,000 for Make-A-Wish®.

Over 2,000 Mustangs in attendance
Burnout, revving, drag, & dyno competitions
Mustang Celebrities & AM Girls
Over 8,000 people in attendance
A Make-A-Wish® surprise vehicle reveal
$126,751 raised for charity
Lines at the entrance gate started forming well before 7AM at Maple Grove Raceway as Mustang after Mustang began to parade into the show. Vehicles representing every Mustang generation were present with 26 trophies awarded by show’s end. AM Judges, along with the rest of the AM Staff,volunteered their time, working tirelessly throughout the morning and afternoon.

Some of the most well-known manufacturers in the aftermarket communitywere represented throughout the raceway grounds. Companies such as Pypes, BBK, Flowmaster, Kooks, Mishimoto, Borla, Anderson Composites, and many more attended the show, highlighting their catalogs of Mustang parts. Many enthusiasts were able to get the lowdown on new parts, with a large portion of attendees taking advantage of the show’s discounts. Corsa Performance Exhaust even setup shop, installing their exhausts on the day of the show in exchange for charitable donations.

AM2017 had two automotive celebrities in attendance, who took countless pictures and signed autographs for fans throughout the show. The legendary hot rod hall of famer Chip Foosewas present at the show along with new-comer and Formula Drifter Chelsea Denofa. Chip alsoselected Rob Taylor’s insanely clean 1970 Mach1 to win the Chip Foose Award.

There were plenty of Mustang events throughout the course of the show, drawing large crowds of enthusiasts. A revving contest sponsored by Flowmaster provided a thunderous soundtrack with several of the loudest Mustangsin attendance showing off their obstreperousexhaust systems. AM Customer Corey Davis and his 2014 Mustang GTblasted out the other contestants, earning him a trophy and the title of the loudest ‘Stang at the show.

The REV-X dyno competition showcased threehigh horsepower Mustangs, all utilizingturbo setups on their coyote platform Mustangs, with 3rdplace laying down 1013 WHP. The trophy for the highest horsepower Mustang went to Anthony Santora who put down 1178 WHPon a detuned setup since he didn’t have time to break-in his new clutch before the show.The Mickey Thompson burnout competition brought together three Mustangs to duke it out to take home the trophy for the best smoke show. Plumes of smoke and chunks of rubber littered the track and grandstands in their attempts to bring home the top prize. In the end, “Fast Eddie” Beidler and his Foxbody took home first place by throwing the most smoke and shredding some tires in the process. 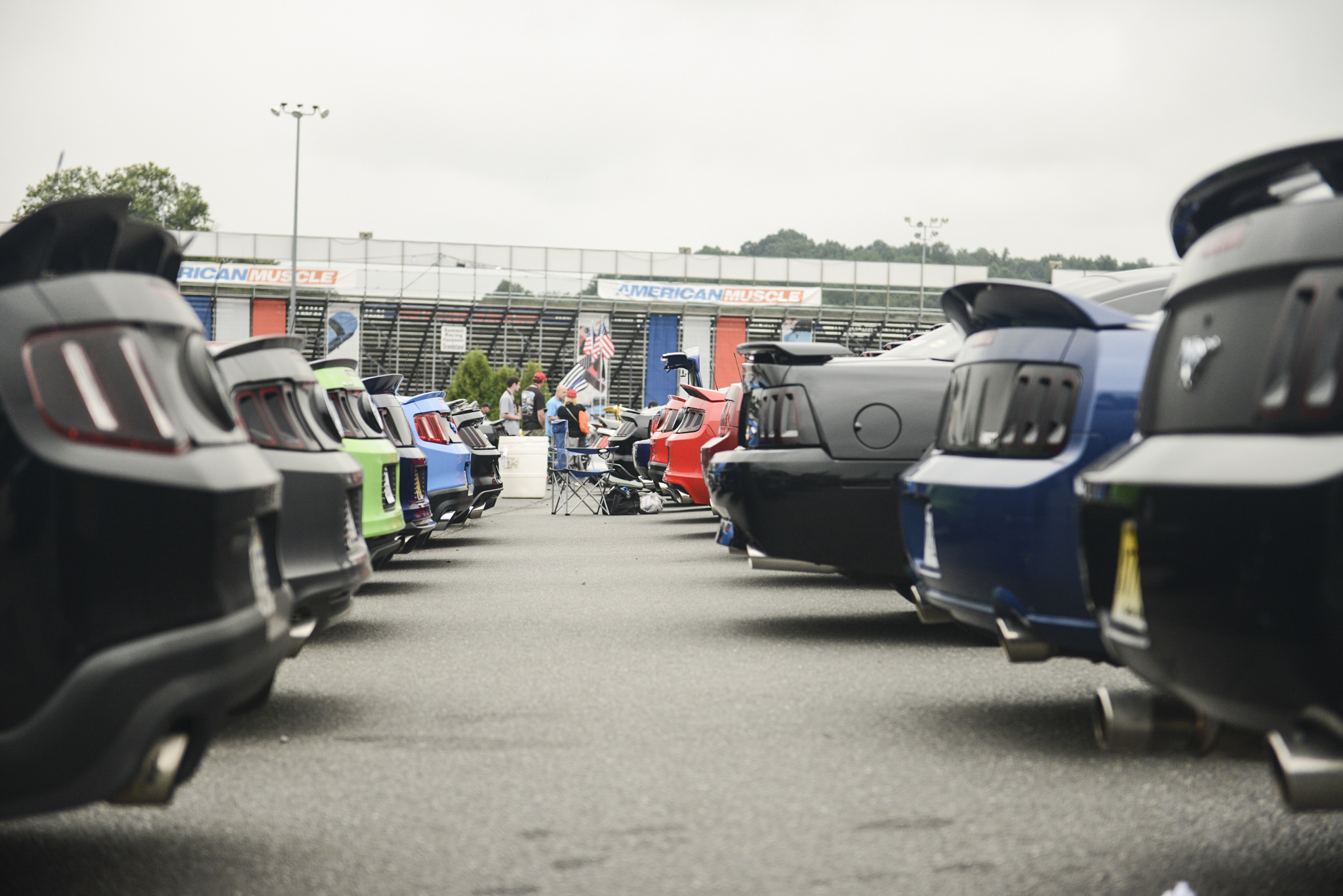 The exhibition drag races sponsored by VMP Tuning put on an amazing show for all the attendees by running some feverishly fast ¼-mile times. VMP brought their stable of company and employee owned Mustangs from Florida as well as a supercharged F-150 SuperCrew that was running consistent 11.7 second passes. JamiRussell even brought his Iron Outlaw Mustang Funny Car to stretch its legs on the quarter mile trackwhile laying down a modest 7.58 @ 176 MPH.

AM2017 wasn’t just a gathering of America’s favorite pony car, it was also about charity and raising money for an awesome cause. AM2017 helped to raise $126,751for Make-A-Wish®, with a few automotive themed surprises added to the mix. Mustang builds have always been a big part of the theme for any AmericanMuscle car show however this year’s Make-A-Wish® recipient Lucas was presented with his Extreme Terrain overhauled Jeep Grand Cherokee, which was completely customized from top to bottom.

From its custom blue and black theme carried throughout the build, to the Rough Country 4” Lift Kit, 33” Mickey Thompson Baja ATZP3 Tires on Mammoth 8 Black Steel Wheels, Barricade Roof Rack Basket; this rig had the rugged stance any off-road enthusiast would swoon over. Needless to say, Lucas was almost speechless when they pulled the cover off his newly-refreshed ride.In addition to the Grand Cherokee build, AmericanMuscle’s parent company, Turn5, Inc., unveiled a separate dream build for Make-A-Wish® recipient, Levi, at their annual BBQ.

AM2017 may have wrapped up after the final awards were given out, but the memories from the show will last for years to come. Mustangs of every style, specialty and generation inhabited the show, while thousands of spectators sauntered through the show grounds in awe. We would like to thank everyone that attended this year’s show and would like to welcome everyone back for AM2018!

Starting out in 2003, AmericanMuscle quickly rose to be one of the leading aftermarket Mustang parts providers in the business. Catering to the needs of late-model Mustang owners and enthusiasts, AmericanMuscle provides the most desirable parts at the best prices. Located just outside of Philadelphia, AmericanMuscle is dedicated to offering the Mustang community with the highest quality of parts and service. Please visit http://www.AmericanMuscle.com for more information.