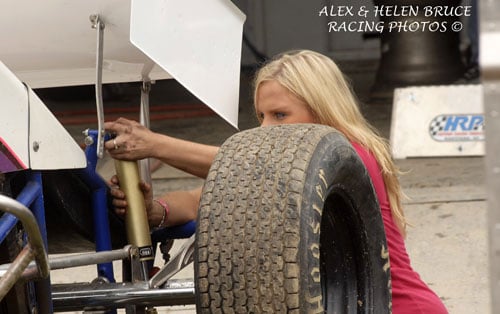 Tony Stewart Racing Saturday announced the addition of Jessica Zemken to its stable of drivers.

A New York native, Zemken will run what the team calls a “true outlaw” schedule in 2010, competing in a variety of 410 and 360 sprint car races, including stints with the World of Outlaws and All Star Circuit of Champions.

“It’s an awesome opportunity,” Zemken said Saturday at The Dirt Track @ Lowe’s Motor Speedway, where she competed
Click here to find out more!
in the World of Outlaws World Finals. “To be around a team with so much knowledge and experience is going to be great,” she added.

TSR looks at this effort as more of a satellite team as opposed to a full-time deal. Stewart already fields World of Outlaws sprint car teams for Donny Schatz and Kraig Kinser. Instead, TSR is taking Zemken’s existing car number 1z team under its wing and will provide technical assistance.