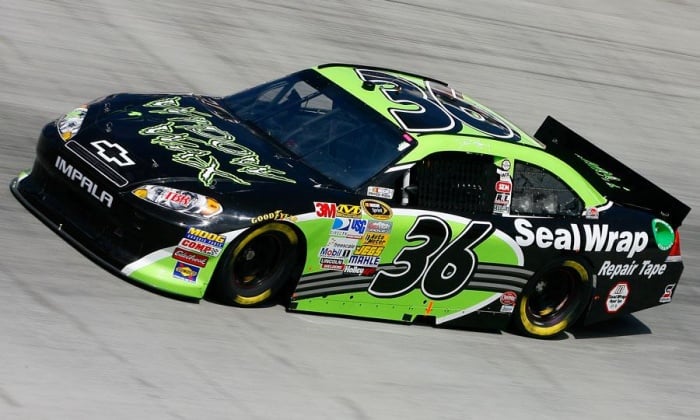 Ryan and Dave Blaney have competed against each other on the race track just twice, both times last year. One was a charity dirt modified event where the son finished first, and the father second. The other was a big-block modified race at Canandaigua Motorsports Park in upstate New York, where neither driver won but experience outran youth.

Beyond that, the Blaneys don’t usually go head-to-head. “I pretty much know what the outcome is going to be,” Dave said, “so there’s no need to go do it.”

That may change July 24, when Dave and Ryan will both be at Eldora Speedway for a Camping World Truck Series event that will be NASCAR’s first national race on dirt since 1970. They’ll even be running for the same team — Brad Keselowski Racing, which will field Ryan full-time in its No. 26 truck for 2013, and Dave at Eldora in a No. 19 that will feature several different drivers and compete for the owners’ championship.

And for once, 19-year-old Ryan — who last season became the youngest race winner in Truck Series history, and was later runner-up in a Nationwide event — may be at a disadvantage. Dave is something of a legend at the half-mile dirt track, having won six World of Outlaws features there, twice including the King’s Royal, one of that circuit’s biggest events. The elder Blaney last competed in that event in 2010, and has been a regular participant in the Prelude to the Dream charity race that track owner Tony Stewart holds at Eldora.

“I’ve turned a million laps there,” said Blaney at Charlotte Motor Speedway on Friday, testing Tommy Baldwin’s No. 7 car — renumbered for this season to honor the owner’s late father — on the Sprint Cup Series. But looking toward Eldora, he’s not sure how much his extensive experience on the dirt track will help.

“Anyone with some dirt experience, it’s going to help them over there. But with dirt racing, you just never know what kind of track conditions you’re going to have,” he said. “It can be wet and have some grip, or it can be dry and be four seconds a lap slower in a half-mile. It can be like ice. It’s hard to tell, so you have to wait and see. But that’s the thing — if you’re a dirt guy, you learn to adapt to huge changes in the track surface. So we’ll see. Hopefully by the end of it, you can maybe guess what the track is going to do, and have the truck right.”

Blaney said BKR general manager Wayne Setterington contacted him about potentially running the Eldora race well before the race was even finalized on the Truck Series schedule. BKR announced last week that its second truck would be divided among Keselowski, Joey Logano, and Ross Chastain, with the elder Blaney making the one start at Eldora.

“It looks like they’ve got funding for the second team for pretty much the whole season, so they can afford to put an old guy in there for one night, you know?” joked Dave, 50. “We’ll see what happens.”

Asked to name his biggest wins at Eldora, Blaney recalls a former event called the Historical Big One that paid $100,000 to win, as well as the King’s Royal, for which the winner receives a crown and purple robe in Victory Lane. “Pictures that my kid makes fun of me for,” he said with a smile. The 1995 World of Outlaws champion, Blaney clearly relishes the chance to get back on the dirt in the Truck Series event, which is called the Mudsummer Classic.

“It’s going to be awesome,” he said. “I saw the video of (Stewart and Austin Dillon) testing, and I was like, ‘Wow, they were going around that place pretty fast.’ But I don’t know if the track will be wet or sticky. Being able to see concerns me, with the windshields. In the sprint cars, your visor is your windshield. It’s going to be fun to see how it turns out.”

The biggest thrill, though, will be working as a teammate to his son. But this time, dad shapes up as the driver in the family to beat.

“He doesn’t have any dirt experience,” Dave said of Ryan. “It might not play any type of role. You can’t really tell.”

Don O’Neal is looking forward to the Gateway Dirt Nationals