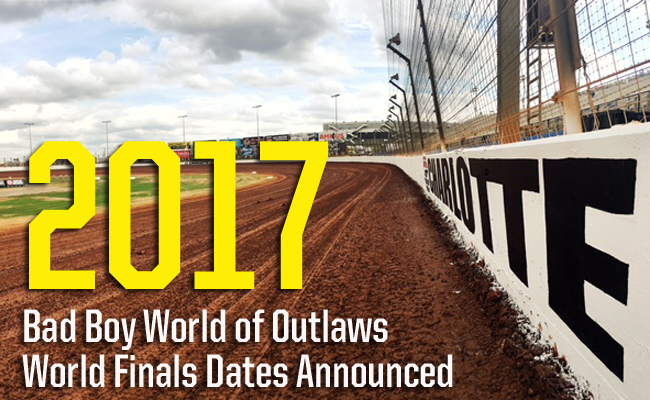 The inaugural OneDirt World Short Track Championship saw more than 300 entries with nine different divisions take on The Dirt Track at Charlotte. Back by popular demand, the second annual event will commence two weeks of heart-pounding, clay-slinging action on Charlotte’s lightning-fast, four-tenths mile oval. Thursday, Oct. 26 will be the first day of the OneDirt World Short Track Championship. Short-track stars from across the country will wrap up their season on Saturday, Oct. 28.

“Charlotte is one of those destinations that everyone wants to be at,” said World of Outlaws CEO Brian Carter. “Whether that’s competing in or watching the best short-track racing in the world. These two marquee events will wrap up the 2017 season. With over 300-plus race cars on hand at the first annual World Short Track Championship, we’ve created an event that builds up the buzz for the season finale with the World Finals the following week.”

Ticket renewals are available starting on Thursday, Oct. 27 at The Dirt Track at Charlotte Motor Speedway ticket booths. If you renew at the track this weekend you’ll be eligible for your choice of renewal gifts including vacuum cleaners, ratchet sets, sleeping bags, sit-on coolers, flashlights, mini-tool sets and camo rifle cases. Supplies are limited so renew early! Dates regarding new purchases will be announced soon.

Tickets for the 2016 Bad Boy Off Road World of Outlaws World Finals are still available by visiting the ticket booths at the Dirt Track at Charlotte. If you are unable to make it to this premier event, www.DIRTvision.com will be covering all the action LIVE!