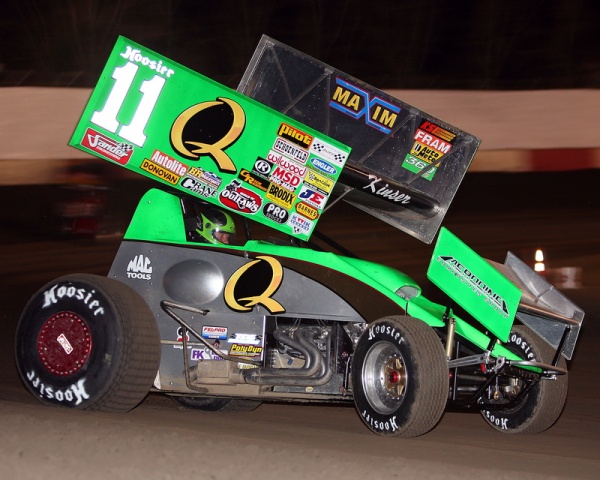 Kinser, 55, is seeking relief from what doctors diagnosed as a bulged-disc between his C6 and C7 vertebrae.

“It gets against the nerves and the spine and runs a lot of pain along the left side of my arm and my fingers and the back of my shoulder,” says Kinser, who has received occasional injections since July to ease the pain.

“It’s hard to get a good night’s sleep,” Kinser added. “I don’t notice it too much in the race car but it’s pretty uncomfortable the rest of the time.”

The operation will be performed by Dr. Terry Trammell of Indianapolis, who is well-known in the motorsports community and has been active in trackside medical care since 1973. Dr. Trammell specializes in spinal surgery and is active in safety research, having served as Director of Medical Services for the CART series. He is currently a consultant to the Indy Racing League.

Kinser, who has earned a record 552 career A-feature wins and 20 championships with the World of Outlaws Sprint Car Series, has avoided catastrophic injury during his career.

“I’m looking forward to getting some relief from some of that pain,” he admitted.

“But at the same time I’m not looking forward to having surgery. I’ve never had anything like that.”

The procedure, scheduled for November 10, will be done to Kinser’s cervical spine, which is made up of seven vertebrae and begins at the base of the skull. Physicians say even mild trauma to the cervical spine can cause pain, numbness, weakness, and tingling when one or more spinal nerves are injured, irritated, or stretched.

Kinser, currently fourth in the championship standings, says he is still having fun racing and expects to return stronger in 2010.

“I’m not finished yet,” he laughed.