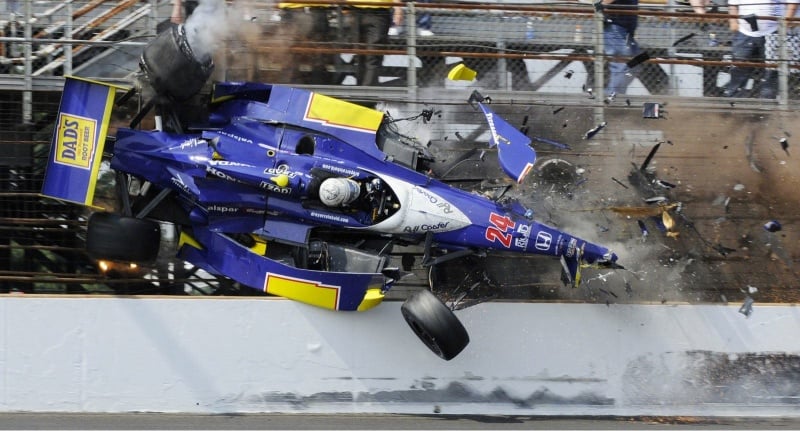 The drama of the Izod IndyCar Series season finale at Auto Club Speedway in Fontana, Calif., started early for our ABC Supply team, but we weren’t the only ones to know drama last week. Will Power and Ryan Hunter-Reay brought their battle down to the last laps of the 500-mile race Saturday night, with Hunter-Reay winning his first IndyCar championship and Power watching his title hopes evaporate — for the third consecutive year.

Our troubles began when our regular driver, Mike Conway, told us Wednesday he didn’t want to race on ovals anymore — starting immediately. Was I shocked? You bet. Was I upset? Yes and no. It put us in a really tough position, but I will never make a driver do something he doesn’t want to do when it comes to racing. I won’t even tell him what helmet or safety equipment to wear because, in the end, it is his butt in the seat. He has to be comfortable and confident.

Mike was neither Wednesday, and that’s not good for someone expected to drive an Indy car at more than 200 mph. And he reached 210 mph in testing that day (even as others struggled to reach 206 mph), but he didn’t want to do it any longer. I know it was hard for him to tell me, but I’m glad he did.

My son Larry called Wade Cunningham, who drove our second car at Indianapolis Motor Speedway this year, and Wade flew in the next morning, arriving after his custom seat, which was overnighted from our Houston race shop. Wade was excited about the chance to drive again, even if he was coming in at the last minute. Everyone else had a day of testing under their belt — along with a season of running these new cars. Wadeâ??s last race was four months ago at Indy.

We knew it’d be really tough because he only had about 20 hot laps in the car before qualifying. There were issues with the Hondas in practice Friday morning, and we had to sit out about half of practice while the Honda engineers sorted things out.

Wade qualified 23rd but started 24th because he, along with 13 other drivers, had to take a grid penalty for changing engines too many times this season. Honda wanted us to run a different engine from the one we ran in Baltimore, and we were penalized because it was over our allotment.

In the race, Wade lost laps early but figured out where the car wanted to run. He had been trying to figure that out in final practice Friday night and made a mistake similar to what point leader Power did in the race — with pretty much the same result. The ABC Supply crew spent half the night rebuilding the car.

It took Wade about half the race to find his groove, and when he did he picked up 10 mph! The track gained some speed because the sun had set and Wade went from being lapped to passing cars. Unfortunately he’d lost three laps in the beginning and didn’t get many chances to gain laps back. He finished 14th, but I think he did a great job filling in for Mike under the circumstances. I’m glad he was available to help us out.

Congratulations to Ed Carpenter on winning the race — it’s the second consecutive year that he won what turned out to be the season finale. Winning as a driver-owner makes it even better, but a win is a win and there is no feeling like it in the world.

Hunter-Reay knows that feeling. Despite long odds — he went into the race 17 points down and started 22nd — he never gave up hope, and it paid off for him and Michael Andretti’s team. Congratulations to them for winning the title — they made it exciting for everyone watching that night.

Overall, the IndyCar Series had a good first season with the new car and engine package. The officials had to make adjustments on the fly, and some of the rulings really ticked off some people, including me. And that’s all I have to say about that.

Dallara did a hell of a job with the brand new car this year, even though it doesn’t look like an Indy car from the rear with those bumpers. Hell, when they went from the front engine roadster to the rear engine car, there were grumblings, but we all adapted then just like we are adapting now.

This year the racing was close and exciting even without the huge packs of cars racing four abreast like in past seasons. The drivers walked away from some really bad-looking accidents (including Mike at Indy). If a driver did get injured, he only missed a couple races instead of the rest of the season.

The schedule is still being finalized, and if what I hear is true about one track, we’ll return to an old favorite of mine next year. It’s been a long time since we raced there but I always enjoyed it. I’m looking forward to having a race in Houston — I can save on the hotel bill since it’s so close to home.

Our team doesn’t have anything finalized yet, but I expect to be signing contracts over the next month. We didn’t have the best results this season, but there were a few bright spots. What I did see was that we were competitive on the track. But the bottom line is that we at A.J. Foyt Racing have a lot of work to do over the winter — it’s time we got started.

There were some problems in IndyCar this year, but we had to work through them. If we are to continue to make this sport work in the future, we, the owners, drivers and management have to talk to each other, not about each other. Things aren’t perfect, but when have they been? Not in my lifetime. But as Hunter-Reay demonstrated so well, we can’t give up hope.

AJ Foyt comes from a different era of racing driver