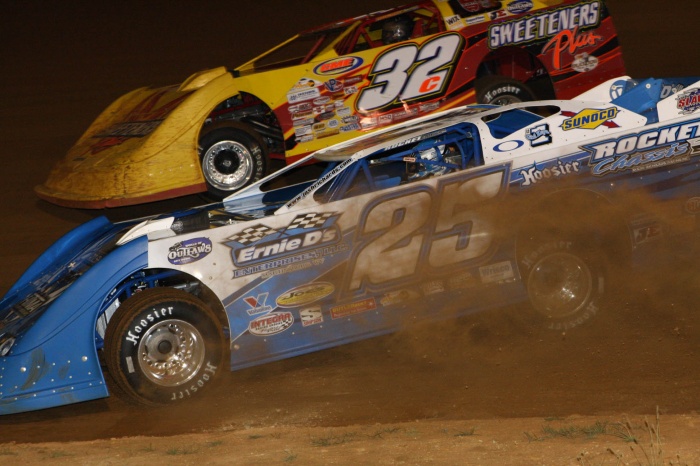 CONCORD, NC – A record number of events appear on the 2013 World of Outlaws schedule (Late Model Series), which was released on Thursday during the Performance Racing Industry trade show in Orlando, Fla.

Fifty-four race dates comprising 49 A-Mains at 38 tracks in 21 states and Canada are currently confirmed as part of the national tour’s ambitious 2013 itinerary, including an unprecedented season-opening slate of eight events in Georgia and Florida during the month of February.

The milestone 10th consecutive WoO LMS campaign under the World Racing Group banner will commence for the second straight year with the ‘Winter Freeze’ on Feb. 8-9 at Screven Motor Speedway in Sylvania, Ga. A format change will turn the event into a doubleheader featuring an $8,000-to-win 40-lapper on Friday night and a 50-lap, $10,000-to-win A-Main on Saturday evening.

Also part of the busy first month of World of Outlaws action is the second annual Bubba Army Late Model Winter Nationals on Feb. 15-17 at Bubba Raceway Park in Ocala, Fla – a three-night extravaganza topped by the historic ‘Super Sunday Showdown’ paying $20,000 to win – and the traditional visit to Volusia Speedway Park in Barberville, Fla., for the UNOH DIRTcar Nationals Presented by Summit Racing Equipment, which in 2013 includes three complete WoO LMS programs on Feb. 21-23.

Bubba Raceway Park’s ‘Super Sunday Showdown’ on Feb. 17 stands as one of a half-dozen mega-money shows spread across the 2013 schedule. The list of marquee events also includes the $50,000-to-win USA Nationals on Aug. 1-3 at Cedar Lake Speedway in New Richmond, Wis.; the seventh annual Firecracker 100 on June 27-29 at Lernerville Speedway in Sarver, Pa.; the fifth annual Illini 100 on April 5-6 at Farmer City (Ill.) Raceway; the inaugural Buckeye 100 on April 12-13 at Wayne County Speedway in Orrville, Ohio; and the Memorial Day weekend ‘Bullring Bonanza’ on May 25-26 at Tyler County Speedway in Middlebourne, W.Va..

The ’13 season will conclude for the seventh straight year with a pair of 50-lap A-Mains during the PEAK Motor Oil World of Outlaws World Finals Presented by NAPA Auto Parts on Nov. 7-9 at The Dirt Track at Charlotte in Concord, N.C.

“We’re looking forward to a 2013 season that promises more World of Outlaws Late Model Series racing than ever before,” said Tim Christman, who will serve as the WoO LMS director for the seventh consecutive year. “With help from great racetrack promoters across the country, we’ve been able to put together a schedule that will produce plenty of excitement for fans and present a challenge for the drivers.”

The richest event in 2013 remains Cedar Lake Speedway’s 100-lap USA Nationals, a crown-jewel race that will be showcased on the World of Outlaws trail for the fourth consecutive year and seventh time overall in its 25-year history. The Aug. 1-3 spectacular will be an all-World of Outlaws weekend in ’13 as well with the Thursday-night preliminary program becoming a full-points WoO LMS show paying $6,000 to win.

Lernerville’s Firecracker 100, meanwhile, will boast three full nights of competition for the fourth year in a row. An early-summer spectacular known for its fan-pleasing excitement both on and off the track, the Firecracker weekend begins with 30-lap, $6,000-to-win preliminary features on Thurs., June 27, and Fri., June 28, before ending with the traditional 100-lap headliner offering $30,000 for first place on Sat., June 29

Century grinds offering $20,000 first-place prizes will also be contested on back-to-back spring weekends – the Illini 100 at the quarter-mile Farmer City oval on April 5-6, and the Buckeye 100 on April 12-13 at Wayne County. The Illini 100 will run at a Farmer City track under new management in 2013, while Wayne County’s husband-and-wife promotional team of Jason and Kristin Flory will present a huge two-day show after earlier this year successfully bringing the WoO LMS back to the central Ohio facility for the first time since 2006.

Another major early-season event is set for Tyler County, the quarter-mile Mountaineer State oval that has gained nationwide acclaim for its unique high-dollar WoO LMS affairs the past two years. Promoter Frank Wilson will focus on the Memorial Day holiday for his marquee show in 2013, expanding the ‘Bullring Bonanza’ to two days on Saturday-Sunday, May 25-26. Details of the race format and purse structure are still to be determined, but it is expected that the Bonanza’s race-fan lottery/raffle that proved so popular this year will be replayed.

The ’13 schedule also will feature a pair of late-season doubleheaders at Selinsgrove (Pa.) Speedway (Aug. 31/Sept. 1) and Berlin Raceway in Marne, Mich. (Sept. 20-21). Details of the twinbills will be released at a later date, but complete WoO LMS cards will be run on each night of the weekends.

Selinsgrove promoter Charlie Paige has decided to present two WoO LMS A-Mains after his attempt to host the tour for the first time in 2012 was rained out. The Labor Day weekend event will rekindle the circuit’s summer-ending holiday doubleheaders in the Keystone State that were run from 2006-2010 at Tri-City Speedway in Franklin.

The paved 7/16th-mile Berlin Raceway, meanwhile, will once again be covered with clay for WoO LMS action after this year’s ‘Down & Dirty 100’ was such a thrilling hit. The weekend format will be changed to give race teams and fans two full nights of full-fender competition.

The 2013 season’s longest swing remains July’s ‘Wild West Tour,’ which currently boasts five events over a seven-day period. WoO LMS stalwart Deer Creek Speedway in Spring Valley, Minn., is scheduled to kick off the busy summer stretch on Sat., July 6, with the ‘Gopher 50’ charity race (the ninth straight year the event is part of the series), followed by subsequent races on July 8 at Black Hills Speedway in Rapid City, S.D.; July 9 at Gillette (Wyo.) Thunder Speedway, which returns to the tour after a year’s absence; July 11 at Red River Co-op Speedway in Winnipeg, Manitoba (second year in a row that the series will visit the Canadian track); and July 12 at River Cities Speedway in Grand Forks, N.D., which has hosted the WoO LMS annually since 2006.

Other highlights of the 2013 schedule:

* An early-season swing to I-30 Speedway in Little Rock, Ark., on March 22 and Whynot (Miss.) Motorsports Park on March 23. Both tracks will be part of the WoO LMS for the first time.

* A stop at Stateline Speedway in Busti, N.Y., for the first time since 2006. The border track will run on Sat., June 1, two days after the event at Delaware International.

* Three races in the week preceding the Firecracker 100 – Canadian events on Thurs., June 20, at Brighton (Ont.) Speedway (a new addition to the series) and Sun., June 23, at Cornwall (Ont.) Motor Speedway and an Empire State showdown on Tues., June 25, at Canandaigua (N.Y.) Motorsports Park.

* Shawano (Wis.) Speedway will continue its midweek date preceding the USA Nationals when it presents the World of Outlaws for the fourth year in a row on Tues., July 30 (raindate of Wed, July 31), and Independence (Iowa) Motor Speedway will host a post-USA Nationals event for the third consecutive year on Mon., Aug. 5.

* A return to the Wolverine State for a weekend of action. Winston Speedway in Rothbury, Mich., will conduct a WoO LMS event for the third straight year on Fri., Aug. 16, with another Michigan date to be announced for Sat., Aug. 17.

* After drawing a standing-room-only crowd for its inaugural WoO LMS event in 2012, Little Valley (N.Y.) Speedway will hold an encore on Thurs., Aug. 22.

* Winchester (Va.) Speedway, which had its 2012 WoO LMS rained out, will dub its ’13 event on Sat., Aug. 24, the ‘Raye Vest Memorial.’ Details of the special race run in memory of 2011 Woo LMS champion Rick Eckert’s longtime car owner will be announced in the near future.

* The redesigned West Virginia Motor Speedway in Mineral Wells will lead off the Labor Day weekend with an event on Fri., Aug. 30. The tour competed at the track in 2010 but ’13 will mark the first World of Outlaws show on the shortened WVMS layout.

* A late-season doubleheader in the Midwest on Fri., Sept. 13, at Belle-Clair Speedway in Belleville, Ill., and Sat., Sept. 14, at Federated Auto Parts Raceway at I-55 in Pevely, Mo. The St. Louis-area tracks teamed up for a well-received doubleheader earlier this season.

Seven facilities are scheduled to host multiple WoO LMS A-Mains in 2013. Tracks set to run three races are Bubba Raceway Park, Lernerville and Volusia, while two events will be contested at Screven, Cedar Lake, Selinsgrove, Berlin and The Dirt Track at Charlotte.

Five tracks will host the WoO LMS for the first time in 2013: I-30, Whynot, Lavonia, Brighton and Selinsgrove.

For the most up-to-date schedule information on the WoO LMS, visit www.worldofoutlaws.com.

Written By: World Of Outlaws