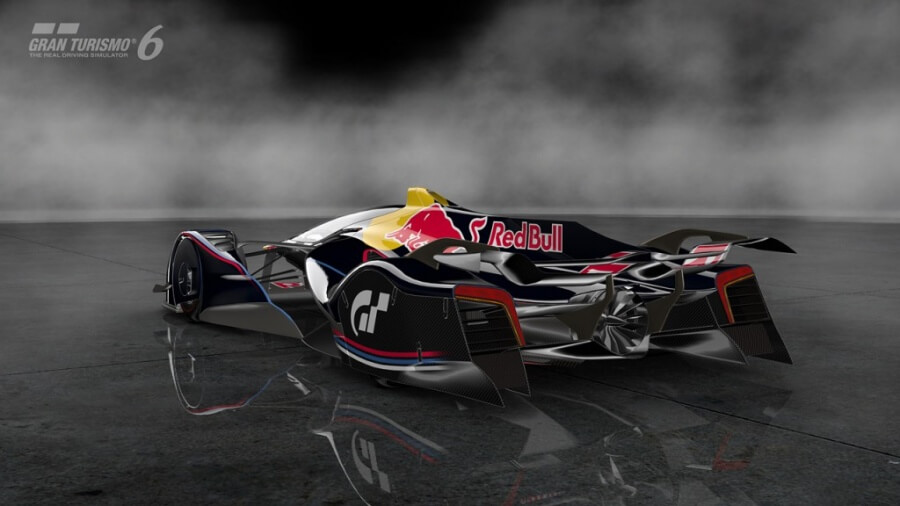 Red Bull X2014 images have been released. Take one part Adrian Newey and one part limitless imagination, shake them up in a box with Gran Turismo 6, and you get the Red Bull X2014.

In fact, the X2014 isn’t just one car–it’s three. The fan car, code named X2014/F will be joined by the X2014/S Standard car and the X2014/J Juniorcar. All three were penned by Polyphony Digital in collaboration with Adrian Newey, chief technical officer of Red Bull Racing F1.

Red Bull with the Red Bull X2014 isn’t the only brand to offer a special one-off prototype car for the GT6 game world, of course. Mercedes-AMG’s Vision Gran Turismo concept stakes out its own territory in the extreme design and performance arena.

In GT6 in addition to the new Red Bull X2014 there are a total of 3 models in the lineup, each with a different level of performance. There is a compact entry level formula called the “Junior”, a “Standard” model with conventional suspension and aerodynamics, and the “Fan Car”; the model with the ultimate downforce and speed with its active suspension and fan mechanism.

In GT6, players can learn to drive pure formula cars in steps through the “Red Bull X Challenge”, guided by the champion, Sebastian Vettel.

In Gran Turismo 6, we have collaborated with leading companies in the racing scenery such as Yokohama Rubber and KW Automotive as technical partners. Insight and data for developing real cars in the partnership has been fed back into the physics model which governs the dynamics and behavior of the cars in the game.

KW Automotive is a company that has an extremely strong impact in the Nürburgring 24 hour race. Using their 7 post rig, a huge amount of information has been collected for springs and dampers, and we have incorporated this into the suspension model. Gains due to changes in surface input and differences in phases were recreated in detail, having the player experiencing the same feeling the driver has in a real car.