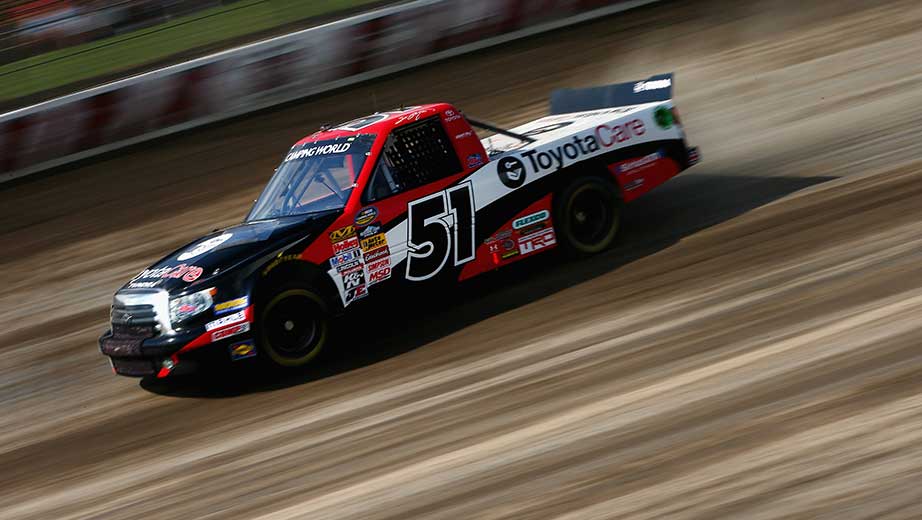 Ryan Blaney and Erik Jones share the lead in Eldora Truck Race Practice Times after today’s practice sessions. The teams are now gearing up for qualifying. Later tonight the Mudsummer Classic will get underway at Eldora Speedway.

Austin Dillon had the third-fastest lap of the second practice with a time of 87.596. Now a full-time driver on the NASCAR Sprint Cup Series, Dillon won last year’s Mudsummer Classic, which marked the first NASCAR race on dirt since 1970 and the first ever in the Trucks Series.

Regarded as a dirt-track ace — he does it in his spare time — Dillon will be among the favorites to win tonight’s race. He has five Truck Series wins in 58 starts, and won the Series title in 2011.

The times in the second session were slower. Five drivers in the opening practice had a lap of 90-plus miles per hour.

Erik Jones will race on dirt for the first time in his career tonight, but it didn’t look like it in his first practice session.

Kyle Busch Motorsports has won seven of the nine Trucks races this season, and Jones will try to keep that trend going at Eldora.

The start of the opening practice was delayed slightly due to a muddy track, and the session was extended 10 minutes.

Keystone Light Pole Qualifying is scheduled for 5:10 p.m. ET (FOX Sports 1). The best of two laps will determine the order. The first of five qualifying races starts at 7 p.m. ET, and a last-chance qualifying race begins at 8:10 p.m. ET.