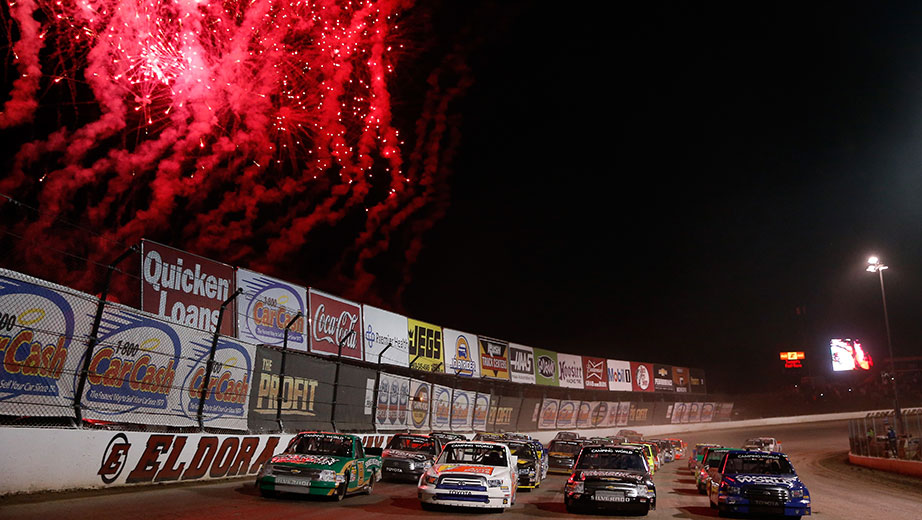 Three NASCAR Sprint Cup Series regulars, a semi-retired short-track veteran and the underdog darling of last season’s inaugural Mudsummer Classic are scheduled to be back for the NASCAR Camping World Truck Series’ second-ever race on dirt at Eldora Speedway next week.

Austin Dillon listed on the Eldora Truck Race 2014 Entry List and will be back to defend his golden shovel victory from 2013 in the second-annual event, scheduled next Wednesday (9 p.m. ET, FOX Sports 1) at the historic half-mile dirt track that Tony Stewart owns in Rossburg, Ohio. He’ll be joined by his brother, Ty Dillon, in a pair of Richard Childress Racing Chevrolets.

Ken Schrader, who won the Keystone Light Pole Award last year to become the oldest pole-winner in a NASCAR national series race, was also listed on the preliminary entry list released Wednesday. He’ll be in solid equipment in the No. 00 Toyota owned by Gene Haas.

Sprint Cup rookie Kyle Larson is also on the Eldora Truck Race 2014 Entry List who dazzled the crowd with his dirt-track savvy in last year’s running. Larson will be back in the No. 32 Turner Scott Motorsports Chevrolet entry for Wednesday’s race.

Sprint Cup rookie Michael Annett is scheduled to make his first truck series start since the 2008 season in a truck owned by NTS Motorsports. He’ll be a teammate to NASCAR Next driver Gray Gaulding and Chase Pistone.

The part-time drivers will try to make progress against a steady cast of Camping World Truck Series regulars, including defending series champion and current points leader Matt Crafton. The list of full-time drivers also includes Norm Benning, who will return after his captivating drive into the main event through the last-chance qualifying race. Benning is listed with a new truck number — No. 6 instead of his traditional No. 57.

NASCAR Next driver Erik Jones, who posted his second career victory in the series’ most recent race at Iowa Speedway, is also on the entry list in the No. 51 Toyota from Kyle Busch Motorsports.