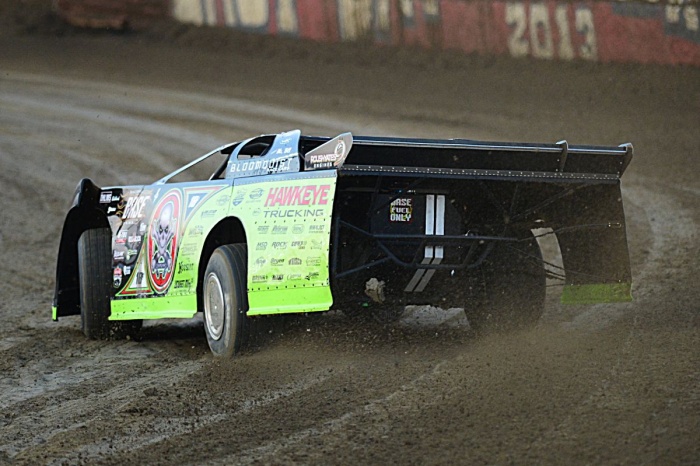 Scott Bloomquist has won almost everything there is to win on dirt, including an array of titles at Eldora Speedway. Next week, one of the great dirt-track racers of his time will make his national-series NASCAR debut in a vehicle fielded by another famous wheel man — Kyle Busch.

Scott Bloomquist leads a group of dirt specialists who will compete in Wednesday night’s sold-out Camping World Truck Series event at Eldora, the first dirt race at NASCAR’s national level in more than 42 years. The Tennessee resident will make his first start on the circuit in a No. 51 truck owned by Busch and overseen by crew chief Ryan “Rudy” Fugle, who has won twice in the series already this year.

On dirt, few drivers carry quite the reputation of Scott Bloomquist, a 49-year-old Iowa native who has more than 500 career feature victories to his credit. Scott Bloomquist has won 14 titles at the track or series level, most recently the Lucas Oil Dirt Late Model crown in 2010. He also has extensive experience at Eldora, six times winning The Dream — a $100,000-to-win race that stands among the facility’s marquee events — most recently earlier this year.

Scott Bloomquist has also twice won the World 100 at Eldora and has claimed three major-event victories at Charlotte Motor Speedway’s dirt track. His more limited stock-car experience includes a trio of starts in the ARCA Series in 1991. A member of the National Dirt Late Model Hall of Fame, Bloomquist was Busch’s car owner last year at the Prelude to the Dream, when the Joe Gibbs Racing driver won the charity event at Eldora.

But Scott Bloomquist won’t be the only driver at Eldora next week with extensive dirt-track experience — or even ties to an established NASCAR star. Eddie Sharp Racing is fielding its No. 6 truck for Landers, a 31-year-old dirt late model driver from Batesville, Ark., who has over 100 feature wins to his credit. While Landers is making his first Truck Series start, his dirt car is owned by Clint Bowyer, and counts Mark Martin Automotive among its sponsors. Landers hails from the same hometown as Martin.

Also preparing for his first Truck Series start is Heffner, a 41-year-old native of Stephentown, N.Y., who will drive for owner Robert Colarusso. Heffner is a two-time dirt big-block modified champion at Lebanon Valley Speedway — like Eldora, a high-banked, half-mile clay oval — in West Lebanon, N.Y. Heffner has eight ARCA starts to his name, most recently at Lucas Oil Raceway in Indianapolis in 2011.

Babcock is a veteran dirt late model and modified driver from Wayne, Ohio. The 33-year-old won at Eldora in May of this year, claiming an American Late Model Series event at the track. Babcock, who will be driving a No. 84 truck owned by veteran NASCAR racer Chris Fontaine, has won over 140 feature events in his career.

Neither Eldora nor the Truck Series will be new to Hines, a 41-year-old native of New Castle, Ind., who has long been a standout on both asphalt and dirt. Hines has 69 NASCAR national-series starts to his credit, most recently on the Nationwide tour in 2006. His 52 starts on the Truck Series include a pair of fifth-place finishes at Mansfield in 2004 and at Richmond the next year.

Hines, who will pilot the No. 13 truck of ThorSport Racing, counts among his 85 career victories a half-dozen at Eldora, most recently last September in a sprint car. Hines drove for Tony Stewart in the U.S. Auto Club ranks until fracturing his pelvis and left femur in an off-road motorcycle crash in 2007 — an injury that led Stewart to bring aboard another promising young racer, Ricky Stenhouse Jr.

Those specialists will take on the usual roster of Truck Series regulars, some of whom will be competing on dirt for the first time, as well as a handful of other NASCAR drivers who came up as dirt racers. Larson and Newman will both drive for Turner Scott Motorsports while Schrader will field his own car. Wallace will pilot a truck owned by Bobby Dotter. Dave Blaney will compete for Brad Keselowski Racing, the same organization that fields the truck of his son Ryan.

“I’ve turned a million laps there,” the elder Blaney said of Eldora, where the former World of Outlaws champion has claimed major events such as the Historical Big One — another $100,000-to-win race — and the King’s Royal, in which the victor is outfitted with a crown, robe, and scepter. Dave Blaney rarely competes in the same race as Ryan, a 19-year-old who last season became the youngest winner in Truck Series history.

Not all of these dirt specialists are guaranteed berths in the 30-truck main event. The top 20 in owners’ points after last Saturday night’s race at Iowa were locked in, a group that includes Dave Blaney (his No. 19 truck is 10th), Scott Bloomquist (whose No. 54 is 13th), Dillon (whose No. 39 is 18th), Hines (whose No. 13 is 19th) and Wallace (whose No. 81 is 20th). The rest will all have to race their way in through a series of six qualifying heats that will set the lineup for the 150-lap, three-segment race.