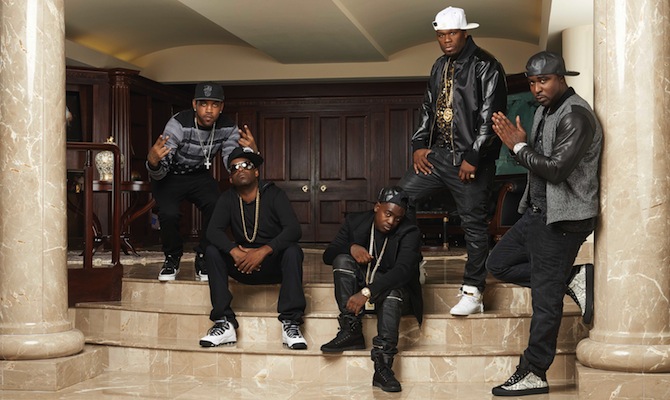 Tony Yayo of G Unit mentions Tony Stewart in a future song release. Skip to the 20:00 min mark on the video below to play the clip directly from the studio.

The line by Tony Yayo refers to the Tony Stewart sprint car crash. That crash tragically took the life of Kevin Ward Jr. Click here to watch the video and learn more about that story.

G Unit is a forever controversial music group that was formed by hip hop artist 50 Cent who is a well-known protege of Eminem. The hip-hop crew was formed in 2003 and jumped to massive heights of popularity and control of the industry after the release of Get Rich or Die Tryin which sold 10 million copies.

G Unit once appeared inseparable but had a falling out in 2008. However, just recently they all got back together for a G Unit Reunion and have been releasing songs left and right. The group features 50 Cent, Lloyd Banks, Tony Yayo, Young Buck and newly added member Kidd Kidd.

The G Unit group now lives together in the Connecticut mansion owned by 50 Cent. G Unit Records is now under an independent record label. This allows them to release music fast and current with the news headlines directly from the studio. This is opposed to sitting on a record for months to a year waiting for the label to ok the release.

G Unit recently released a song titled ‘ahh shit’ which was put on the internet shortly after the Mike Brown shooting in Ferguson, MO. This is just one of many examples of songs coming out quickly and in sync with the current news headlines. It’s what the group used to do when they first arrived on the scene.

The untitled G Unit Tony Stewart song shown below featuring a mention of NASCAR driver Tony Stewart has not been released. However, you can see the un edited studio video of it being recorded live below. The song will likely be featured on the upcoming album The Beast is G-Unit which is the follow up mixtape to The Beauty of Independence which was released on iTunes in August.

Mixtapes are what helped give the group the attention to get signed in 2003. Notably, 50 Cent is the Future and Power of the Dollar are well known albums by rap fans but the CD’s were only sold hand to hand and on street corners, not in stores. Actually, G Unit is basically the group that created the mixtape and have been releasing them ever sense.

The video clip is from a G Unit documentary series filmed recently by XXL magazine. The 25 minute clip below features interviews and happenings from inside the mansion. It also includes several studio clips of yet to be released and incomplete songs including the Tony Stewart rap song by Tony Yayo.

50 Cent has been mention in articles on this website multiple times over the years. Click here to see our full list of past stories featuring 50 cent.

Skip to the 20:00 min mark to play the clip of the song mentioning Tony Stewart.

Back at Stewart-Haas, Tony Gibson is tying all 4 teams together as 1 unit