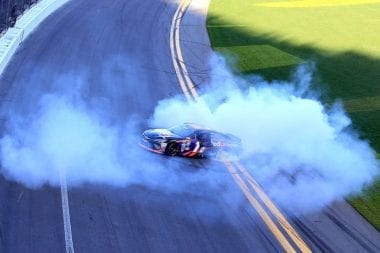 2016 Daytona 500 Results sheet shows the closest finish in the history of the Daytona 500. The results were led by Denny Hamlin after last lap pass to beat Martin Truex Jr by 0.010 seconds.

Watch the final laps of the 2016 Daytona 500 below. The closest finish in the history of the Daytona 500. The full 2016 Daytona International Speedway results are posted as well.

“They don’t get much more crushing than that,” Kenseth told FOX. “I thought I definitely was in the position I wanted to be in. All three of my teammates were awesome. I saw Denny had the run, thought he would go around me if I didn’t block him … just got me turned sideways there. The safer play would have been to finish second, but we’re here to try to win the Daytona 500.”

For his part, Hamlin said “that was a team victory” in Victory Lane.

Dale Earnhardt Jr. saw his Daytona 500 Victory Lane dreams with beloved No. 88 car “Amelia” go up in smoke, as he spun off Turn 4 while battling for a top-five position at Lap 170. The Hendrick Motorsports driver was scored 36th after his car was towed off the track.

“We were starting to move forward, get aggressive and we just lost it,” Earnhardt told FOX after a trip to the infield care center.

Earnhardt’s Hendrick Motorsports teammate and rookie Chase Elliott experienced a rough Daytona 500 debut: After starting from the pole, Elliott’s No. 24 Chevrolet got loose in the middle lane, slid across the track and into the grass while running in the top 10 at Lap 19. His car was towed across the track, but the 20-year-old driver returned to the track to salvage a 37th-place result.

“We will just have to look past it and get on for Atlanta,” Elliott said following the wreck. “That is the most important thing now. Can’t get caught up in what happened today, it is irrelevant now. We’ll try and get it fixed and make some laps. Then it’s on to Atlanta and if we can make some laps we will and move forward from here.”

Elliott Sadler came 2nd in the closest NASCAR finish ever