Mark Martin house goes up for same. View the photos of the North Carolina home below. Retired professional stock car racer Mark Martin has put his lakeside mansion in North Carolina on the market for $2.55 million. Martin bought the home a little over three years ago for $2 million. 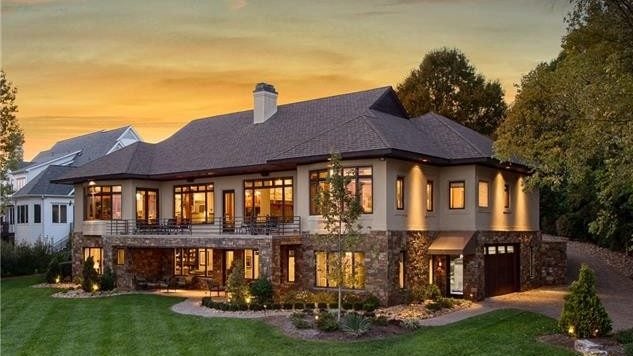 Built in 1994, the 5,767-square-foot home was designed to maximize its 190 feet of Lake Norman shoreline, with large windows in nearly every room looking out on the lake.

The formal dining area off the kitchen offers stunning lake views from a bank of large picture windows. Overhead, a glass chandelier hangs from the dark wood, tongue-and-groove vaulted ceiling.

Next to the kitchen and dining area, the great room’s soaring ceiling gives the home an incredible sense of space. It is bisected by a two-story double fireplace with custom mantels and built-in bookcases.

The master bedroom also has a bank of picture windows, a walk-in closet, and a master bathroom with a custom shower and soaking tub.

The home’s walk-out lower level has a large entertainment system, library, and wet bar with refrigerator. There’s a four-car, climate-controlled garage, with one of the garage bays having been converted into a home gym.

Outside, a spiral staircase connects the first-floor slate patio to a second-story slate balcony. The 0.74-acre property’s wide backyard lawn ends at the shoreline, with its own permanent dock.