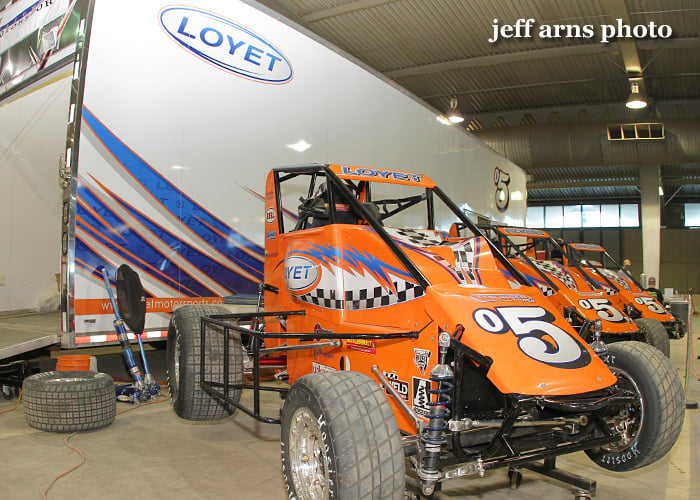 Brad Loyet, the Sunset Hills, Mo. driver, will pilot the o5 entry for the team. Loyet has made the Saturday night A-Main event for the past three years, with his highest finish of tenth and a 13th place finish in 2011. Loyet was victorious in the 2010 Vacuworx International Race of Champions and plans to compete in this event for the third year. In his ninth year of entry, Loyet is seeking his first Chili Bowl A-Main victory.

Concord, Cali. native Damion Gardner, driver of the o5G, will join Loyet in the Tuesday night Vacuworx International Race of Champions. Gardner is looking to add a Golden Driller to this 2008 victory. Gardner finished 14th in the 25th Chili Bowl Nationals. This will mark Garnder’s second year in the Loyet Motorsports stable.

Ryan Pace originally from Arroyo Grande, Cali., but currently residing in Brownsburg, Ind. will be handling the o5R machine and is the newest member the Loyet Motorsports driver lineup. This is Pace’s third Chili Bowl Nationals with a tenth place C-Main finish in 2009 being his highest.

Gary Taylor the Tulsa, Okla. transplant from Snohomish, Wash. will pilot his o5T midget. Representing Loyet Motorsports for the second consecutive year, Taylor finished one transfer spot out to Saturday night’s A-Main event in 2011. This is Taylor’s ninth year seeking a Golden Driller and his highest finish is 12th in 2009.

The 26th annual Chili Bowl Nationals will air on CBS Sports and live audio will be available from RacinBoys.com.

More information on the Chili Bowl Nationals can be found at www.ChiliBowl.com.