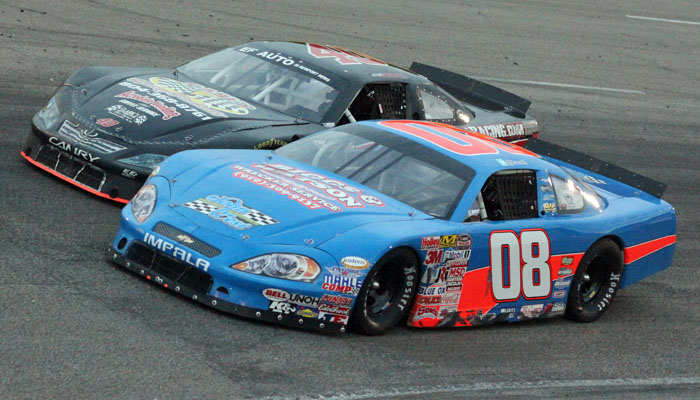 Deac McCaskill’s goal this year was to simply get his racing program back on track. However, it proved to be much more than that.

“I’ve never won as many races and poles or led as many laps as I did this year,” McCaskill said in marvel of the accomplishments.

He also placed eighth in the series’ national standings with a record of 18 wins, 27 top fives and 29 top 10s in 30 starts. All but one of the wins came at Southern National. The other came at South Boston (Va.) Speedway.

As one of the top-10 drivers in final national standings, McCaskill is locked into the NASCAR Late Model feature field for the UNOH Battle At The Beach on the .4-mile oval at Daytona International Speedway during Speedweeks in February 2013. NASCAR Whelen All-American Series Late Models will be featured along with the NASCAR K&N Pro Series and NASCAR Whelen Modified Tours. McCaskill plans to accept his spot and compete at The World Center of Racing.

“We’ll find a way and we’ll be there,” McCaskill said. “It’s everyone’s dream to race at Daytona. It’ll be a really cool new experience for everyone.”

McCaskill, 35, found himself down and out just two years ago. The 2010 season began with optimism, but ended with a thud.

“We thought we were ready to compete for the championship at South Boston in 2010 but it seemed like nothing went right. Racing became stressful instead of fun,” McCaskill said. He finished fourth in track standings, 202 points behind champion Justin Johnson. In the final race of the year in October, he totaled his car.

Frustrated, he sold the rest of his racing equipment and hauler to Darrell Gilchrist and became the young driver’s mentor and crew chief in 2011. They raced in the Limited Late Model division at tracks across Virginia. Late in the season, McCaskill felt the pull to return to the driver’s seat. The Gilchrist team agreed to sell all of McCaskill’s equipment back to him, along with their sparingly used new Hedgecock-chassis Late Model.

“I had everything I needed to go racing again this year, but I didn’t have a plan,” McCaskill said. “Then Southern National reopened (for the first time since 2008) and everything started falling into place. The track is 45 minutes from my shop. I started racing there at 16 when it originally opened in 1994.”

“I thought we’d be able to race once a month this year. When we started winning races it progressed into a fulltime season.” McCaskill said.

He didn’t know it at the time, but while he was working as Gilchrist’s crew chief, he was learning every inch of the car he would be driving in 2012.

“The Gilchrists bought a Hedgecock chassis because it’s the one that people are winning races and championships with,” McCaskill said. “I never drove or worked that chassis before. I do my own set-ups, so as I was working with Darrell I learned a lot about that car. I ‘knew’ that car when I bought it. We went through the season with no mechanical failures and no engine problems.”

McCaskill found himself inside the top five in the national point race at mid-season.

Other drivers who occasionally stopped into Southern National during the season include 2012 national champion Lee Pulliam as well as C.E. Falk III and Nate Monteith who placed third and fourth in final national standings respectively.

McCaskill and his wife Sandy have two young daughters, who have enjoyed their time at the race track this year.

“It’s really cool to see our girls excited about racing,” McCaskill said. “They were still a little too young to understand it back in 2010. Having them in victory lane were the best moments of the year.”

McCaskill will be honored for his track and state championships at the NASCAR Whelen All-American Series Awards event. The ceremonies are scheduled for Friday, Dec. 7 at the Charlotte Convention Center’s Crown Ballroom at the NASCAR Hall of Fame.

A driver’s best 18 results through Sept. 16 counted toward their states and national point totals, and
the champions are decided on overall point total. Once a driver reaches 18 starts, their total would increase incrementally as they replace some poorer runs with better results.

Ross Chastain had a win taken away by NASCAR last week at Iowa; Rebounds with another win at Gateway