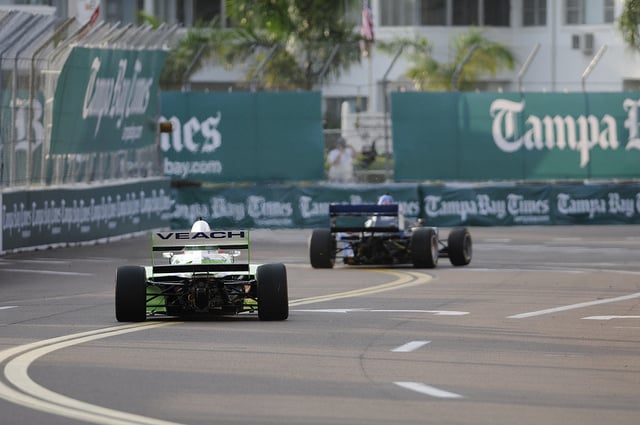 INDIANAPOLIS – Andretti Autosport announced today it has signed 17-year-old Zach Veach to compete in Firestone Indy Lights alongside 20-year-old Carlos Muñoz. Veach will pilot the No. 12 K12 entry for the 2013 season, which includes the Freedom 100 held annually at the Indianapolis Motor Speedway.

“I’m glad to have Zach [Veach] back with us for 2013 and to see him step up to a [Firestone Indy] Lights car is great, it means the [Mazda Road to Indy] ladder is working,” said Michael Andretti, Chairman, President and Chief Executive Officer, Andretti Autosport. “He’s been with us for each step of the ladder so far and we’ve continued to be impressed by him. We’re looking forward to seeing his talent develop even further this season.”

Veach, of Stockdale, Ohio will contest the 12-race Firestone Indy Lights schedule on a diverse line up of ovals as well as road and street circuits. The season will open on March 23-24 on the streets of St. Petersburg and the season finale will be hosted at Auto Club Speedway, Oct. 18-19.  All Firestone Indy Lights races will be broadcast on NBC Sports Network and Veach will be competing for the $1 million Mazda Road to Indy scholarship to move up to the IZOD IndyCar Series and attempt to qualify for the famed Indianapolis 500.

“It’s crazy to think I’m going into my fourth season in 2013 with Andretti Autosport,” said Veach.  “I’m still just as excited as I was the first day I joined the team and to be moving up to Firestone Indy Lights is a dream come true.  The cars are very similar to the Atlantics car, which I spent a considerable amount of time testing in 2009 and 2010. I’m stoked to jump up to a bigger car with more horsepower and the start of the season can’t come soon enough!  I have to give a big thank you again to K12 for continuing to be apart of my program both on the racetrack and for my education.  Without them I would not still be chasing this crazy dream of mine.  I also have to thank Michael [Andretti] for continuing to give me this opportunity with the team and to my family for the continued support.”

K12, the nation’s largest provider of proprietary curriculum and online education programs for students in kindergarten through high school, will continue its relationship with Veach in 2013 by serving as his primary sponsor. K12 has delivered over 4.5 million online courses from its extensive portfolio over the past decade, including courses developed for credit recovery, core courses, world languages, and AP and high school electives. Curriculum solutions provided by K12 are used in over 2000 school districts and through full-time online public schools like the one Veach attends. The flexibility and quality of these programs, where students access lessons, classrooms and teacher support via the Internet, appeals to a wide variety of students including advanced learners and those who are honing unique talents. For Veach, online learning keeps him on pace to pursue his career as a semi-pro racing driver.

“K12 is incredibly excited and proud to have the opportunity to give Zach the tools he needs to achieve his racing dream, while also fulfilling his strong passion for learning,” said Ron Packard, CEO and Founder of K12 Inc. “With this sponsorship we hope to introduce more parents and students to the benefits of K12‘s flexible online education system and show how exceptional students, like Zach, can benefit from an individualized education.”

This will mark Veach’s first year in Firestone Indy Lights, after he topped the speed charts and set an unofficial new track record at the Indianapolis Motor Speedway while testing a Firestone Indy Lights machine on the Brickyard’s celebrated grounds in mid-2012.  For the 2012 racing season, Veach had nine top-10 finishes, three of which were top-five results including a runner-up finish on the Streets of Toronto in the Star Mazda Championship presented by Goodyear. Prior to that, he won the 2012 Formula Car Challenge presented by Goodyear Winter Series championship, using four race wins and four pole positions to capture the title.

In 2010 Veach first joined Andretti Autosport and in addition to 2011, competed in the USF2000 National Championship, which means he is the first driver to successfully compete at every level of the Mazda Road to Indy developmental ladder system. Following his 2010 season, Veach clinched the 2011 USF2000 Winterfest Championship title with two race wins and three pole awards. Following his 2011 season, he was then voted “Most Popular Driver in USF2000” along with being named by ESPN The Magazine as a NEXT athlete in motorsports.

Off the track, Veach is an advocate against distracted driving and bullying prevention.  He has also authored a book, 99 THINGS TEENS WISH THEY KNEW BEFORE TURNING 16, and released a phone app, urTXT, and entered his senior year of high school at K12 this past fall.