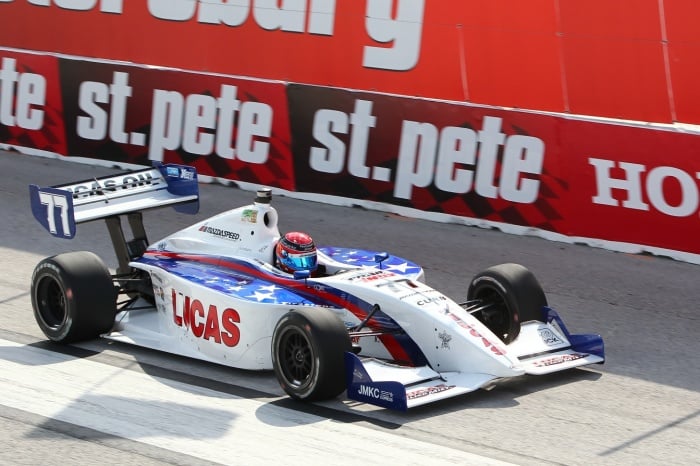 Jack Hawksworth has got his bid to make it back-to-back successes across the other side of the Pond off to the perfect start in the 2013 Firestone Indy Lights Championship – and after triumphing on his series debut in the curtain-raising St. Petersburg 100, he has warned his rivals that he is only going to get better.

Jack Hawksworth made an instant impression stateside by dominating the fiercely-contested Star Mazda Championship as a US racing rookie in 2012, and as he maintains his pursuit of the American Dream, the talented young Bradford-born single-seater ace has graduated to Indy Lights this year with the benchmark Schmidt Peterson Motorsports (SPM) outfit. He admits that he headed down to Florida in optimistic mood.

“We had a very positive pre-season, completed plenty of laps and learnt a lot from testing,” Jack Hawksworth affirmed. “It all ran extremely smoothly, and arriving at St. Petersburg, I felt we had done everything we could and had created a very solid foundation to build upon. I knew we were in good shape.” – Jack Hawksworth

“The Indy Lights car is very different to the Star Mazda. It has a lot more power and downforce and is heavier, so the braking distances are longer. You carry more speed into the corners, but then you need to hit the brake pedal pretty hard. It’s generally just a bigger, faster car and a step-up in performance. You need to look after your tyres a lot more, too; that makes the racing far more strategic, because you can’t push 100 per cent all the way through. Essentially, it requires a whole different driving technique, but it’s a lot of fun.” – Jack Hawksworth

“I’ve been massively impressed by the team so far, and have swiftly established an excellent relationship with everybody here. I’m really enjoying working with them all and couldn’t imagine being anywhere else. Knowing how meticulous they are about the preparation of the cars and how hungry they are to win cannot fail to breed confidence.” – Jack Hawksworth.

Although the 2013 Indy Lights field is a reduced one at present, it is nonetheless of a tremendously high calibre and very much a case of quality over quantity. Hawksworth laid down an immediate marker by lapping a close second-quickest during practice as he worked diligently through SPM’s scheduled programme around the 1.8-mile, 14-turn street circuit, and as he turned his attentions towards qualifying the next day, the McLaren Autosport Award finalist and recently-appointed British Racing Drivers’ Club (BRDC) SuperStar knew he was well in the ballpark.

“It is a relatively small grid, but the top guys are all there, with six or seven of them capable of fighting right at the front,” he underlined. “Hopefully the numbers will pick up as the season goes on, but it isn’t something that worries me – whether I’m competing against eight other drivers or 80 other drivers, I still only want to win!

“The team gave me a really good car for qualifying at St. Petersburg – good enough for pole position, in fact – but we narrowly missed out by two hundredths of a second. If I had hooked it all up, I have no doubt we would have done it so that was a little bit disappointing, but I knew we could turn the tables come the race.

“When the starting lights went out, I got away well and tucked in behind the pole-sitter on the run down to the first corner. He left a gap on the inside under braking, so I went for it, but the track was pretty dusty and slippery there and I hadn’t realised quite how little grip there would be. I locked my rear wheels and ended up running wide, which caused me to drop to fourth.

“It took a lap or two to regain my rhythm after that, but I simply focussed on getting on with it, reclaimed third position and had closed to within eight tenths of a second of the top two when they made contact into Turn One. That allowed me through into the lead and brought out the caution flags. When the race went ‘green’ again, I just concentrated on nailing the re-start, and after that it was all about conserving my tyres, managing the gap and bringing it safely home.”

It was an impeccable debut, and encouragingly for the 22-year-old Cullingworth native – who is carrying scholarship funding from the ‘Mazda Road to Indy’ in 2013 as well as backing from Sparco USA, Exa Networks, Core Pilates, Arai Helmets and Nicholas Jones – the last three Indy Lights season-openers have similarly been won by SPM drivers…all of whom went on to clinch the crown that same year. As he endeavours to follow in their wheeltracks, Hawksworth knows he has made a textbook start – but he is equally well aware that now is anything but the time for resting on laurels.

“To kick the campaign off on the top step of the podium is immensely satisfying and an important psychological boost, and I’m delighted with the result,” he enthused in summary of his St. Petersburg weekend. “It gives you the confidence and the momentum to go off and chase more wins. I was very happy with the pace we displayed, and hopefully in the upcoming rounds, we can extract even more of the car’s potential. There’s plenty still to come.

“I’m certainly not at my maximum with this car yet, but the team is helping me to get to grips with it as fast as possible and I’m learning and improving every time I take to the track. We have to keep on pushing, because nobody else is going to ease off the gas, that’s for sure. The goal has to be to go to Barber Motorsports Park for round two and do the same again.”