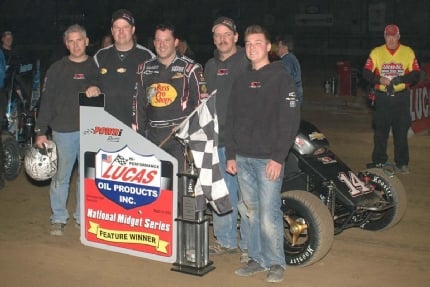 Tony Stewart returned to his short-track roots Saturday, winning the feature in the third annual Battle at the Center on the one-sixth mile indoor Mini Magic Mile at the Southern Illinois Center.

The 41-year-old from Columbus, Ind., led all 40 laps in the non-points event organized and sanctioned by the POWRi Lucas Oil National Midget Series. It had 67 entries and brought together many of the best drivers in Midget racing and several more major short-track series.

“It was a lot of fun,” Stewart said. “I was happy with it. We heard this was a good event last year and decided to run it to get ready for the Chili Bowl (run in Tulsa, Okla., Jan. 8-12). We didn’t run very good in the Chili Bowl last year. We built the car to the same design that I drove in John Godfrey’s Stealth in 1995.”

Stewart also won his heat and qualifying races and started on the outside of the front row next to Bryan Clauson, the three-time National Midget Driver of the Year and the USAC National champion the past three years.

Stewart’s Chevrolet-powered Midget, took the lead at the start and held it against Clauson through seven restarts.

“The only time I got concerned was on the restarts with Clauson,” Stewart said. “They don’t get any tougher than Clauson. He could get close coming on the inside, but after two or three laps, we were all right.”

Clauson, of Noblesville, Ind., ran second until contact from behind by Brad Loyet of Sunset Hills, Mo., on a 34th lap restart spun him in Turn Two.

“I tried to beat Tony to the center of the track and got over the cushion,” Clauson said.

Loyet, a three-time champion in POWRi National Midgets who raced in the national Lucas Oil American Sprint Car Series this season, had been charging hard from his seventh starting position and tried to take advantage of Clauson’s loss of momentum.

Felker’s Spike-Fontana passed Loyet for second in the ensuing restart. He had started 11th.

“I found the top before anybody and ran it most of the race,” Felker said. “It would have been nice to have had a couple of more laps, but you can’t be disappointed finishing second to Tony Stewart. He’s no slouch.”

Stewart faced one final restart with four to go in the 40-lap feature and darted away from Felker to win by three car lengths.

Siner wasn’t far behind. He’d started 20th in the 21-car field and ran the inside line.

“I actually thought I had a chance to win going down the back straight,” Siner said. “I pretty much ran the bottom the entire race. The car responded to the changes I made, mostly the shocks, and I had a radius rod fall off on the right rear suspension that helped us get traction out of the corners. It allowed our car (Spike-Esslinger) to roll a little better and helped it turn.

“The quality of this field is tough and to come from 20th and run third, it was a really good night for us.”