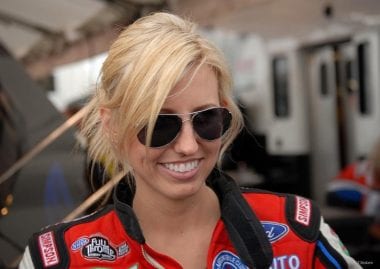 While much hype has been given to female stock car racer Danica Patrick for posting a top 10 finish at the Daytona 500, it has been business as usual in the NHRA Mello Yello Drag Racing Series. Two female drag racers, Courtney Force and Erica Enders-Stevens, have posted back-to-back victories to open the 2013 season in the world’s fastest motorsport. It is the first time in NHRA history that two women have opened a season with consecutive victories.

Force, 24, powered her 8,000-horsepower Funny Car to break all of her male competitor’s hearts, including Matt Hagan, Bob Tasca III, and Ron Capps, and win at the season-opening Winternationals in Pomona on Valentine’s Day weekend.

“We’re not out here just to race against the boys,” Force has said. “We’re here to beat the boys.”

Since Shirley Muldowney broke down the gender barriers in the sport in 1976 with her landmark Top Fuel victory, NHRA has become by far the most diverse motorsports series in the United States. There have been 12 different female winners in the NHRA Mello Yello Series since Muldowney’s initial victory. Muldowney won three world championship titles and 18 career victories in Top Fuel, and Angelle Sampey, who won 41 events in Pro Stock Motorcycle, also claimed three series crowns during her highly decorated career.

Force and Enders-Stevens, who finished in the top five in their highly competitive categories last season and are among the pre-race favorites to win at the tradition-rich East Coast opener in Florida, are certainly championship contenders this year and proudly carry on the legacy that Muldowney started decades ago.

In addition to the exciting racing action in the Top Fuel, Funny Car, and Pro Stock categories, the Amalie Oil NHRA Gatornationals also will feature the season debut of the Pro Stock Motorcycle class. Riders will be looking to knock defending series champion Krawiec off his title perch. Last year, Krawiec and his Harley-Davidson Screamin’ Eagle teammate, Andrew Hines, dominated the two-wheel category by winning 15 of the 16 events contested during the season. The NHRA Pro Mod Drag Racing Series, which will be contested at 10 events during 2013, also will take to the track for the first time this year as Troy Coughlin looks to defend his world championship title.

As always, fans will have the opportunity to interact with their favorite drivers as they’re granted an exclusive pit pass to the most powerful motorsports attraction on the planet. While visiting the pits, interactive NHRA Nitro Alley, and the NHRA Manufacturers Midway, fans will also want to check out NHRA’s popular Hot Rod Junction presented by the Wally Parks NHRA Motorsports Museum that offers a spectacular display of many nostalgic dragsters, race cars, and hot rods, including vintage machines that were driven by “Big Daddy” Don Garlits, Don Carlton, K.S. Pittman, “Big John” Mazmanian, Bruce Larson, and Jerry Baltes. There will also be several NHRA Legends of Drag Racing autograph sessions scheduled throughout the weekend, allowing fans the rare opportunity to meet many of NHRA Drag Racing’s biggest stars from the past.

Fans also will want to take advantage of the popular Championship Sunday Track Walk with Top Fuel legend and Florida resident Darrell Gwynn, which is free to all Sunday ticket holders. This popular event gives fans the opportunity to walk down the legendary dragstrip alongside some of NHRA’s biggest stars.

On Friday, March 15, at the track, fans will have the rare opportunity to attend a special Nitro Pit Party and Press Conference in the Pro pits prior to the first qualifying session. Many of the top stars in the NHRA Mello Yello Drag Racing Series will be featured during the press conference, which starts at 10:45 a.m.

As NHRA continues its Nitro Generation celebration, NHRA is offering free general admission for children 12 and under with a paying adult. Tickets are available online at www.nhratix.com or by calling the NHRA Ticket Sales Center at 800-884-NHRA (6472).