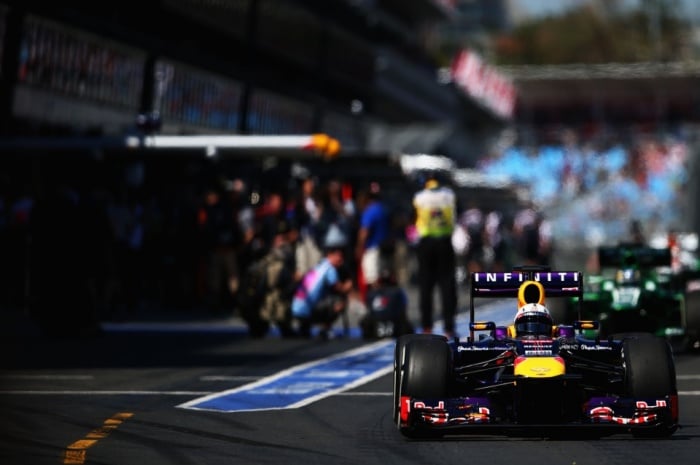 Take a look at the full Australian Grand Prix starting lineup below.

Well, today was strange. Qualifying should have been 1700 until 1800 local time. We had delay, then another delay, then Q1 then a whole series of further delays until finally the whole thing was called off at 1847. We’re lucky the sun went down else we’d probably still be standing there now.
Because there is quite a bit of standing around in these circumstances. Once the car’s ready to go, it’s ready to go and there’s not a lot to do but wait. The activity picks up a few minutes before the session is due to start with tyres arriving, fuel being pumped, instructions relayed. Then the session is postponed, the tyres come off, and everything goes quiet again. The garage has a different rhythm to a normal session and it’s all a bit strange – though in the history of Red Bull Racing this is the first time we’ve started qualifying on Saturday but not finished it.

However, we have had sessions that haven’t started, and sessions that have gone on for ages. The last one was Suzuka in 2010. It was beyond wet in Japan. Officially there was a chance of starting but it never looked likely. Alex Wurz – who was stewarding that weekend – gamely took the FIA safety car out for a recce but when he came back in shaking his head we basically knew nothing was going to happen and that would be it, so we took to building toy boats and sailing them down the pitlane. Like most tracks, at Suzuka the pitlane is slightly below the level of the start-finish straight so in heavy rain you get a little river flowing outside the garages. Hopefully outside the garages. We had to come back and hold the whole session on Sunday morning – and it didn’t seem to have much of an effect as we locked out the front row and stayed that way in the race after a very busy day on Sunday.

Before that we had a qualifying afternoon at Interlagos in 2009 that went on forever. We had rain, heavy rain, torrential rain, thunder, lightning and brilliant sunshine. In the end, a couple of hours after the scheduled finish, Rubens Barrichello pipped Mark to pole by about nine-thousandths of a second (Rubens said he jumped out of the car a couple of times for a ‘comfort break’ waiting for the green light – which may have made the difference). Mark got it back on Sunday though and won the race.

So, it isn’t particularly pleasant to work in – but apocalyptic rain in quali has been lucky for us in the past!

The race is scheduled to air worldwide in just a few hours.

Sebastian Vettel & Mark Webber Attempt To Sticker Their Own Car

McLaren F1 withdraws from Australian Grand Prix due to coronavirus