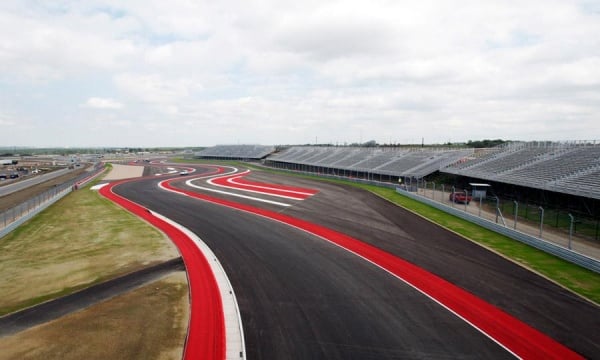 Watkins Glen, Indianapolis, even the Caesars Palace casino car park in Las Vegas – these are just some of the venues to have hosted Grands Prix in the United States over the years. In fact, this weekend the all-new Circuit of The Americas (COTA) in Austin, Texas will become the tenth.

Formula One racing’s association with the great country began at the Indianapolis Motor Speedway – or the ‘Brickyard’ as it is affectionately known – which dates back to 1909. The first Indianapolis 500 was staged there in 1911 on a track surface consisting over three million bricks, hence the nickname.

Bizarrely, the Indy 500 was actually on the Formula One world championship calendar from 1950 to 1960. However, it was virtually unheard of for any of the Formula One teams or drivers to make the trip to the States to compete in what was such a specialised race. Similarly, the American Indy teams and drivers rarely competed in any other round of the championship.

Stranger still, it was only once the 500 had disappeared from the calendar did the Formula One fraternity truly take up the challenge of the great race. Jim Clark finished second in 1963 in a Lotus. Two years later he went one better to take victory, again for Lotus, and in 1966 he followed Graham Hill home in a British one-two.

By this time the US already had its own Grand Prix on the Formula One calendar, the inaugural event having taken place at the Florida airfield circuit of Sebring in 1959. Bruce McLaren was the first US Grand Prix winner, the New Zealander inheriting the lead after Jack Brabham ran out of fuel on the final lap. Aged 22, it made McLaren the youngest Grand Prix winner – a record not broken until 2003 by Fernando Alonso). The race also featured one Indy refugee: Bob Ward, who had won the 500 earlier in the year, entered his Kurtis-Offenhauser, but the dirt-track car stood little chance against the F1 machines and after qualifying last he retired with clutch problems after 20 laps.

The race made a one-off trip in 1960 to the Riverside circuit in California, where Stirling Moss triumphed, before moving to what was to become its home until 1980, Watkins Glen in upstate New York. Innes Ireland won the first Grand Prix there for Lotus, while in the following six years, Hill and Clark took three wins apiece with BRM and Lotus respectively.

Jackie Stewart and Tyrrell continued the run of British triumphs in 1968, before Jochen Rindt finally broke the cycle with Lotus in 1969. Lotus’s success continued in 1970 with new boy Emerson Fittipaldi taking victory.

The circuit was extended for the 1971 event and it was Tyrrell’s Francois Cevert who overcame team mate Stewart to take his one and only Grand Prix victory. Tragically, though, the circuit also claimed the Frenchman’s life in practice two years later.

Ferrari clinched their first US Grand Prix victory in 1975, courtesy of Niki Lauda, and the Italian team were to win twice more before the race left Watkins Glen, with Carlos Reutemann in 1978 and Gilles Villeneuve in 1979.

James Hunt was a double winner at the track, taking back-to-back victories for McLaren in 1976 and 1977, while Alan Jones and Williams claimed the final Watkins Glen win in 1980.

By this time there was a second US race on the calendar. The United States Grand Prix West, or the Long Beach Grand Prix as it was also known, became part of the championship in 1976, with Ferrari’s Clay Regazzoni the inaugural winner on the Californian street circuit. Then in 1977 Mario Andretti made history there by becoming the first and only American to win a round of the F1 world championship on home soil.

The confines of the walls that lined the Long Beach track meant that accidents were never far away, none worse than the 1980 shunt in which Regazzoni broke his back, ending his Formula One career and leaving him paraplegic. Nevertheless, the race continued until 1983, after which organisers chose to switch to Indy cars. The venue finished on a high, however, with John Watson winning from 22nd on the grid, a feat not since equalled, and McLaren team mate Lauda finishing second having started 23rd.

In the meantime, another US race had appeared on the calendar in an even more unlikely venue – a car park at the Caesars Palace casino in Las Vegas. The make-shift track’s first race in 1981, known not surprisingly as the Caesars Palace Grand Prix, was that year’s title decider, with Nelson Piquet’s fifth place enough to clinch the crown over rivals Reutemann and outsider Jacques Laffite. Alan Jones was the race winner.

In 1982 both titles were decided in Las Vegas, as it staged its second and last Formula One Grand Prix. Williams Keke Rosberg arrived as favourite, with his key rival Didier Pironi still hospitalised from his accident earlier that season. John Watson was his only potential threat, but a controlled drive to fifth was enough to make the Finn champion, while Ferrari took constructors’ honours.

Amazingly the Las Vegas event was one of four North American Grands Prix on the calendar in 1982, along with Long Beach, the Canadian race and a new US round in Detroit, the traditional home of the American car industry.

The Detroit event – an a temporary street circuit – proved a relative success after Long Beach and Las Vegas, and remained on the calendar for seven years, providing several entertaining races. The first was particularly remarkable with Watson coming from a lowly 17th on the grid to take victory for McLaren.

The 1983 race saw a surprise win for Michele Alboreto and Tyrrell, while in 1984 an overambitious start-line move by Nigel Mansell triggered a first-lap pile-up and a restart. Nelson Piquet eventually won the race for Brabham.

Keke Rosberg was victorious in 1984, before Ayrton Senna dominated the final three races in Detroit, winning twice for Lotus and the final time for McLaren.

The 1984 season saw yet another US venue added to the schedule – Dallas. A party thrown by the Benetton team at the Southfork Ranch (made famous by the Dallas TV series) was a great success, but the circuit itself proved less of a hit. Searing temperatures caused the surface to progressively disintegrate, with countless drivers crashing out after spinning on the marbles. Rosberg – aided by an air-conditioned skull cap under his helmet – won the race, but the enduring image was that of an exhausted Mansell pushing his stricken Williams across the line to take sixth.

Formula One racing in America finally re-settled in a single home in 1989. With Long Beach, Las Vegas, Dallas and Detroit having all disappeared from the calendar, it was yet another street circuit, this time in Phoenix, which adopted the US Grand Prix.

And it was Senna who made Phoenix his home, winning two of the three races there. Alain Prost was the inaugural victor, finishing first ahead of only six other finishers. However, the 1990 event was the truly memorable one, with Senna having to fight hard to find a way past rookie Alesi to take the win. The champion passed the Frenchman once, but then had to do it all again after Alesi unexpectedly repassed him in the following corner.

Formula One racing was then absent from US shores until Indianapolis put the series back on the map in 2000, exactly 50 years on from the Indy 500’s first appearance on the championship calendar. In front of a sell-out crowd of 250,000 fans, Michael Schumacher was the first winner on the all-new track layout, a 4.2 kilometre (2.6 mile) circuit combining the first corner and start-finish straight of the famous oval – run in the reverse direction – and a tighter infield section. Schumacher led home Rubens Barrichello for a Ferrari one-two, ahead of Heinz-Harald Frentzen’s Jordan.

The 2001 race was overshadowed by the events of September 11, but also provided a memorable Grand Prix as Mika Hakkinen took the final victory of his Formula One career. The 2002 event was memorable too, though for quite different reasons. Ferrari dominated the race, but when leader Michael Schumacher eased off on the final straight to set up a photo finish it didn’t go quite to plan and Barrichello found himself the unlikely victor by just a hundredth of a second.
Schumacher and Ferrari went on dominate the United States Grand Prix at Indianapolis, winning five of the eight races held there up to 2007, including the infamous 2005 event, which saw just six cars compete after all seven Michelin-tyred teams withdrew on safety grounds following the formation lap.

Now in 2012, as Formula One racing returns to the United States for the first time in half a decade, it looks like it has finally found a permanent home at the Circuit of The Americas, the country’s first track purpose built for F1 competition. And as COTA ambassador (and 1978 F1 champion), Mario Andretti, puts it, “it’s clear this will be a phenomenal venue”.

NEXT POST
F1: Worlds Collide As Formula One Returns To America