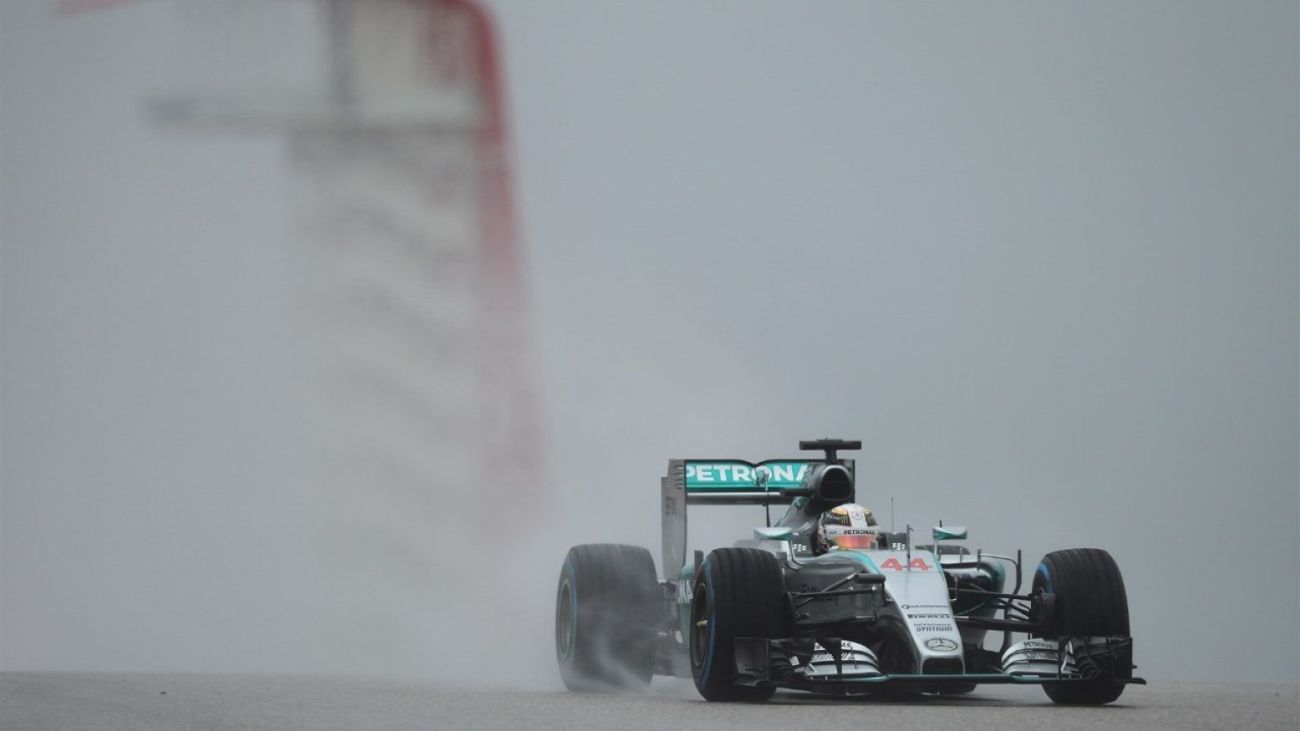 After yesterday’s washout in FP2, the drivers were at least able to take to the track in Saturday’s final practice, although heavy rain made for a treacherous conditions. With downpours worsening as the session wore on, it was championship leader Lewis Hamilton who rose to the top of the timesheet, the Mercedes driver eclipsing Ferrari’s Sebastian Vettel by 0.863s.

Nico Hulkenberg was a strong third for Force India, just ahead of Williams’ Valtteri Bottas and Toro Rosso rookie Carlos Sainz. The Red Bulls of Daniil Kvyat and Daniel Ricciardo sandwiched the second Ferrari of Kimi Raikkonen in sixth and eighth, with the second Mercedes of Nico Rosberg and the other Williams of Felipe Massa completing the top ten.

Things had started badly for Mercedes when Nico Rosberg went off at Turn 3 shortly after he had ventured out on the wet Pirelli tyres which had been mandated for the session by race officials. The German nosed his Silver Arrow into the barriers but was able to crawl back to the pits for a new nose before returning to the track.

It was one of those sessions when it paid to be out and running early on as the times dropped with each lap – until it began raining more heavily after 20 minutes. By then Vettel and Raikkonen had taken control in their Ferraris, but despite the weather conditions Hulkenberg split them for a while in his Force India, battling with Bottas.

Hamilton had had a spell as fastest before Vettel got going, but was now in the pits having his Mercedes’ set-up changed, and given the possibility that this session might yet set the grid if conditions remain poor enough to affect running this afternoon and tomorrow morning, things looked bad when he had dropped down to 10th with half an hour remaining. But out he came, and a beautiful lap put him back on top ahead of Vettel.

Meanwhile, Rosberg had ventured out again and climbed up to third, but improvements from others dropped him back to ninth as conditions worsened again with 20 minutes left.

Vettel aquaplaned off at Turn 19, then spun in Turn 9 and let his SF15-T roll backwards down the hill until he could re-join safely.

“Conditions if you ask me are quite bad, I keep spinning,” he told his team.

“Cars are going off left, right and centre,” Ricciardo said.

Further back, the Marussia duo were locked in a back-and-forth fight for intra-team honours, with Will Stevens only three-tenths ahead of local hero Alexander Rossi with McLaren’s Jenson Button, 16th, in their sights.

Lotus’s Pastor Maldonado, Sauber’s Felipe Nasr and Toro Rosso’s Max Verstappen also all had hairy off-track moments after falling foul of the many patches of standing water, but all were able to escape without sustaining damage.

Even more rain is expected this afternoon.