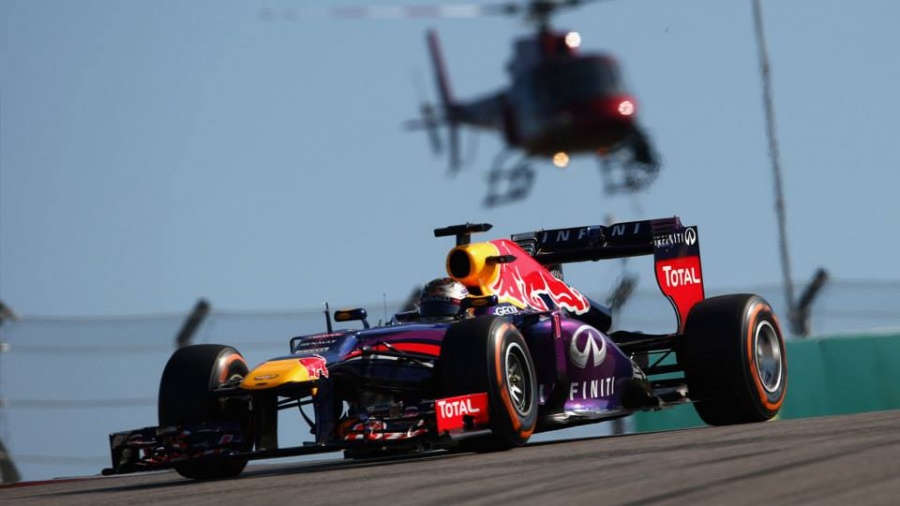 Sebastian Vettel breaks record in United States Grand Prix. A commanding drive to victory at the US Grand Prix gave Sebastian Vettel his eighth win in a row this year and yet another Formula One record, the four-time smashing past Michael Schumacher’s 2004 benchmark for consecutive wins in a single season.

Crossing the line and close to tears, Sebastian, who finished ahead of Lotus’ Romain Grosjean and third-placed Mark Webber saluted both the achievement and the team.

“We have to remember these days,” he said on the radio. “There’s no guarantee that they will last forever. I love you guys. We have an incredible team. I’m so proud of you.”

As has so often been the case this year, the foundations of his victory were laid on Saturday, when he took pole position. That allowed him a start from the clean side of the track and when the lights went out he needed the extra grip to fend off a challenge from fast-starting Grosjean, who passed second-on-the-grid Mark into turn one. Seb held his line, however, and the lead.

After that there was the not inconsiderable task of consolidating his lead, but once a gap to Grosjean had been established, Seb controlled matters from the front, only being headed for two laps when he made his sole pit stop after 27 laps. In the end, the victory was comfortable enough for Vettel to rattle of the fastest lap of the race on his 54th tour.
“It’s the day after, normally on the Monday, when you feel what you have achieved,” he said. “It’s a great feeling, you have a grin on your face and it’s nice. On Sunday things happen fast and you don’t always realise what has been achieved until later.

“It’s down to team effort today,” he added of his 12th win this year. “Everyone is willing to push; this morning the guys were working hard as we had some concerns about reliability on the car, so they were flat out trying to fix the problem and the car ran okay all race, so a big thanks to them.”

Team Principal Christian Horner hailed not only Seb’s achievement but also that of the team, who for the first time managed a sub-two second pit stop when Mark made his sole visit to pit lane.

“An incredible team performance today,” said Christian. “For Sebastian to achieve a new record of the most consecutive wins in a season is a fantastic performance and to be joined on the podium by Mark, who tried everything in the closing laps, gave a team a fantastic podium at the United States Grand Prix. To achieve this result in front of so many of our Team Partners and supporters, as well as setting a potential new pit stop record on Mark’s stop, has topped off a fantastic weekend for the whole team.”

The team’s car data recorded Mark as being stationary for just 1.923 seconds, an incredible feat.
Mark’s race, meanwhile, evolved into a tight race-long battle with Grosjean. After being passed by the Lotus racer and Lewis Hamilton at the start, the Aussie regrouped and chased down the lead Mercedes.

By lap 13 had closed to around half a second behind Hamilton and aided by the circuit’s first DRS zone, breezed past the Mercedes into Turn 12.

I HAVE SOME FAMILY AND FRIENDS HERE THIS WEEKEND, SO IT’S GOOD TO GET A STRONG RESULT- MARK

After that his race was defined by the see-sawing tussle with Grosjean. However, no matter how he hassled and harried he could find no way past the resolute Lotus driver, who used his KERS judiciously whenever Mark tried to maximise the DRS zones. Mark in the end took his sixth podium finish of the year and the 41st of his career.

“The initial launch and my getaway was pretty good,” said Mark. “Romain had a good start too, I wanted to get on the right for the breaking point at the first corner, but that’s what everyone did too. I got boxed in and didn’t get a good exit off the corner, but after that it was a strong race. Our pace was good, but you have to manage the tyres well here.
“Qualifying was where a lot of the race was decided,” he added. “In the end I did what we could, but I think we left some on the table yesterday. I have some family and friends here this weekend, so it’s good to get a strong result. It would have been better to have had a win, but Seb did a good job here this weekend.”

Behind the top three, Hamilton’s fourth-place finish ahead of Fernando Alonso, coupled with Nico Rosberg’s ninth place gives Mercedes a slightly bigger advantage over Ferrari in the fight for second place in the Constructors’ Championship. Mercedes now lead Ferrari by 15 points ahead of the final round in Brazil. Grosjean’s second place leaves Lotus on 315 points, 18 behind Ferrari.

Nico Hulkenberg gave Sauber sixth place in the race, while Sergio Perez finished seventh for McLaren. Behind him Valtteri Bottas took his first career points with a good drive to eighth place for Williams. With Rosberg ninth, Jenson Button claimed the final points position for McLaren.